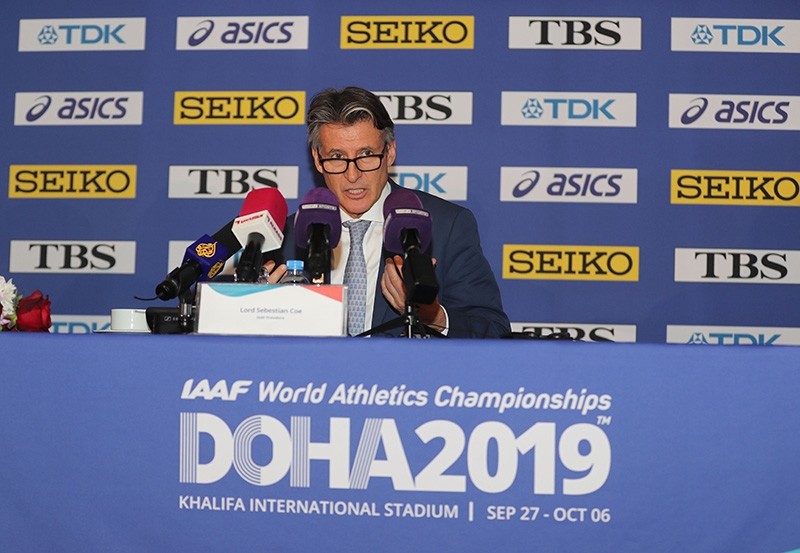 International Association of Athletics Federations (IAAF) President Sebastian Coe said Sunday that sport should take precedence over politics and urged nations locked in a diplomatic dispute with Qatar not to boycott next year's world athletics championships in Doha.

The IAAF chief was speaking in the Qatari capital as organizers launched ticketing arrangements for next year's event, the first athletics world championships to be held in the Middle East.

"I fully expect a full contingent of federations to be there," said Coe, a double Olympic gold medalist.

"And it's very important that international sport consistently and continually makes the point that we have primacy over politics and that is very important."

Qatar has been isolated for the past 17 months by Saudi Arabia and its allies including the United Arab Emirates, Bahrain and Egypt.

They have imposed a near-total embargo on Qatar since June 2017 over allegations the emirate supports terrorist groups and seeks closer ties with Riyadh's arch-rival Tehran.

The world athletics championships is potentially the first major global sporting test of the regional boycott against Qatar.

The football Gulf Cup, meant to be hosted by Qatar beginning in December 2017, saw Saudi Arabia, UAE and Bahrain withdraw from the event, before rejoining after it was switched to Kuwait.

Coe said next year's championships, which run for 10 days and begin on Sept. 27, was "very important" as it would give athletics a "footprint" in the region.

The event will see several innovations, including evening-only sessions, a marathon held at midnight because of fears over Doha temperatures, and mixed-race world championship relays for the first time.

It will also mostly be held in an air-conditioned venue, Doha's Khalifa Stadium, also a World Cup venue, where temperatures will be regulated at around 24 degrees Celsius (75 degrees Fahrenheit).

The IAAF announced Sunday that stadium ticket prices will begin at 60 Qatari riyals ($16).

"It's bigger than getting profits," said Dahlan al-Hamad, the IAAF vice-president, a Qatari.

"You know one of the objectives to host (the) world championship is to expand athletics in the region."

There have been fears that crowds for the championships will be small, in line with other sporting events held in Qatar, including the recent world gymnastics championships.

But Coe added that he was hopeful attendances would be good and "wanted everyone to be there."

He said no decision had yet be taken on whether Russian athletes would compete under a neutral flag, or that of their country, because of the long-running and acrimonious issue of doping.

The IAAF also said it would not introduce a new qualification system for athletes for these championships.