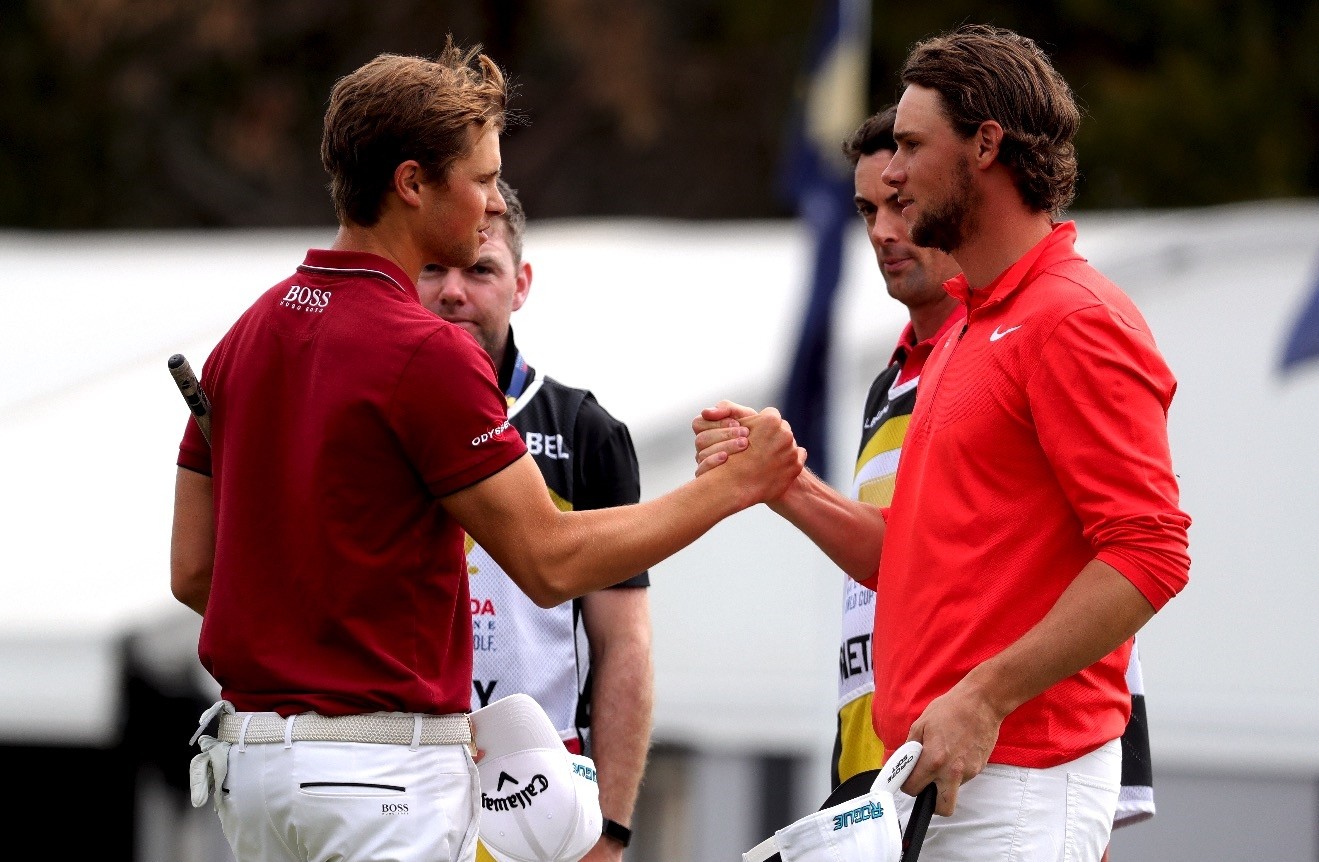 Thomas Detry (L) and Thomas Pieters of Belgium pose together after putting out on the 18th during the World Cup of Golf Tournament in Melbourne, Australia, yesterday.
by Nov 26, 2018 12:00 am

Thomas Pieters and Thomas Detry won the $7 million World Cup of Golf by three strokes in Melbourne on Sunday to secure Belgium's first title in the team event after surviving a late wobble and a charge from hosts Australia.

Overnight leaders by five strokes, the former University of Illinois college mates bogeyed the 15th to see their lead shrink to two shots during the final foursomes at Metropolitan Golf Club.

However, they held their nerve over the closing holes and finished in style with a birdie on the 18th to claim their biggest tournament win at the 28-nation co-sanctioned event.

"Yeah, we weren't far away in the soccer World Cup, so it's good to bring it back," 25-year-old Detry told reporters, a Belgium flag draped around his neck after hoisting the whopping winner's trophy with Pieters.

"You play with your best mate and it's kind of a dream come true. There's nothing like representing your country on the other side of the world, it's just amazing."

Detry celebrated his first big victory, having never won on the world's leading circuits, while his 26-year-old compatriot claimed his first U.S. Tour title after three wins in Europe.

The pair split the winning team's $2.24 million cheque and add their names to a trophy won by Jack Nicklaus, Gary Player and Tiger Woods.

Pieters said the win would "go very under the radar" in Belgium, however.

"We hope kids -- it will get in the media and they'll see us cool guys."

Local hopes Marc Leishman and Cameron Smith started the day six back but mounted a brave challenge to pull within two when the latter holed a brilliant, long bunker shot at the 14th.

Pieters responded with a four-foot birdie putt at the same hole to push Belgium's lead back to three, but Detry opened the door again, nervously lipping out a three-foot par putt on the 15th.

With Belgium wobbling, Leishman had a chance to slice their lead to a stroke, but blew a birdie putt from four feet. It proved decisive, as Belgium steadied with a birdie on the same hole and their three-stroke cushion was enough to absorb a final bogey on 17.

"Obviously there was a putt on 16 which I wish I'd made," world number 21 Leishman told reporters. "It was a pretty bad putt actually... That's one I'd like to have again.

"I think Belgium was clearly the best team all week. They were just too good."

Abraham Ancer, who won the Australian Open by five strokes last week, finished a fine trip Down Under with Roberto Diaz, the pair combining for a final round six-under at the Sandbelt course.

Defending champions Denmark ended six behind in a tie for fourth with Canada, while Matt Kuchar and Kyle Stanley of the United States finished joint 16th with Wales.