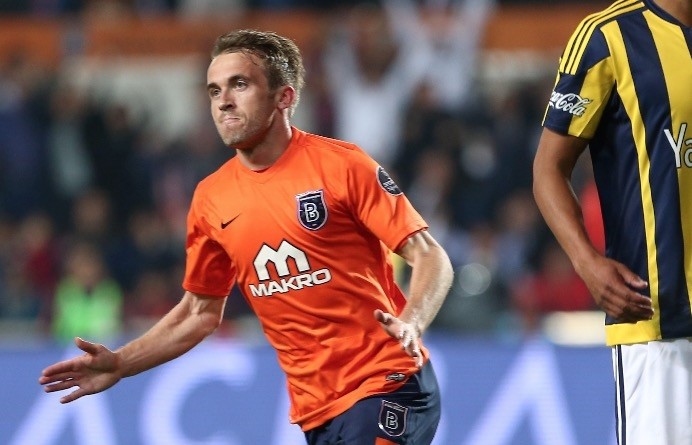 Medipol Başakşehir, a club that has ended the long-standing reign of Istanbul's powerhouse teams in the Super League, steadily continues its meteoric rise. On Monday, the team secured the top spot again after defeating Göztepe 2-0 in an away game

Istanbul is atop the Turkish Super League yet again, but this time it is Medipol Başakşehir, a club with only a limited following that shot to success in the past two seasons. This year the team's fan base is looking to bring their city a title instead of the so-called "big three" of Istanbul - Galatasaray, Fenerbahçe and Beşiktaş.

Defeating Göztepe 2-0 in an away match on Monday, Başakşehir continued dominating the league at 30 points with other prominent Istanbul-based clubs Galatasaray, Fenerbahçe and Beşiktaş struggling to keep their places in lower rankings.

Galatasaray lags six points behind Başakşehir which stands five points ahead of its closest rival, Kasımpaşa, another Istanbul outfit that raised its profile this season.

With a streak of 11 victories, the team also made history in the domestic league as the first outfit to secure a streak of five wins in a season. This is just the beginning for Başakşehir that capped the 13th week in the Super League on top, ahead of January's mid-season break.

Compared to the same point last season, Başakşehir has overachieved. The team was 27 points, sitting second behind last season's champion Galatasaray in the 13th week of last season.

Things are looking much better for them this time around. They have suffered only one defeat this season so far, along with three draws. The team scored 16 goals and conceded only three, the least among its rivals.

Başakşehir also boasts a record of not losing both away and home matches, save for one defeat against Kasımpaşa in the second week of this season, two draws in away games and one draw in a home game.

This is easily the second best period in the Super League for the team since it was established in 2014, when it wrapped up its first stint in the domestic league in fourth place. It boosted its standing in the 2016-17 season when it placed second and closed last season third. This season is expected to be a clash of two new Istanbul powerhouses with Kasımpaşa, although older than Başakşehir, fighting for the title against the orange-and-blue outfit.

Mert Günok is certainly a major contributor to his team's near invulnerability. The veteran goalkeeper, who joined the team from Bursaspor last season, did not concede any goals in the nine matches he was in the lineup so far. He is in the ranks of goalkeepers in Europe with the least goals conceded so far this season along with Manchester United's Ederson Moraes and Liverpool's Alisson Becker.

Başakşehir's two Bosnian stars are credited with the team's recent wins. Riad Bajic, on loan from Udinese, added to a successful penalty shot by his compatriot Edin Visca as the team defeat Göztepe on Monday. It was Visca's fourth goal this season while Bajic proved a worthy substitute for Togolese forward Emmanuel Adebayor who is struggling with injuries this season. Bajic has scored three goals in four matches for Başakşehir.