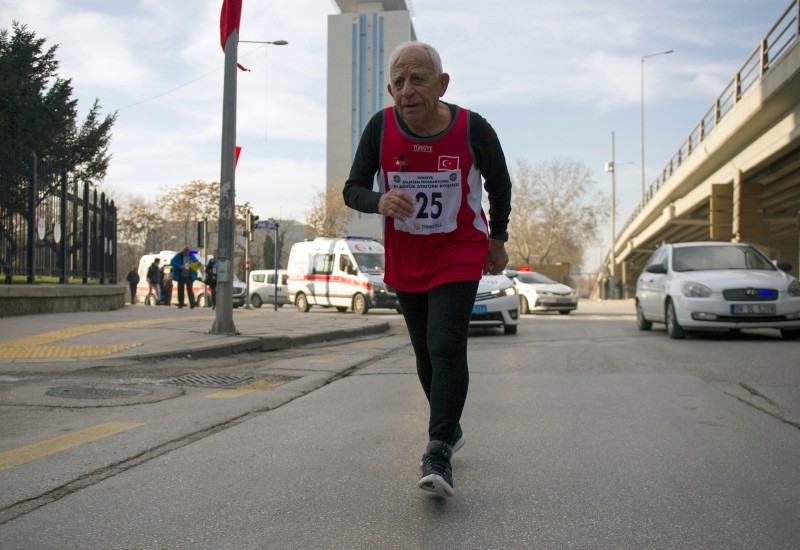 Turkey's oldest licensed athlete, who has been attending the Grand Atatürk Run in Ankara for the past 70 years, passed away after suffering a heart attack during the 83rd edition of the race on Thursday.

According to a statement by Turkish Athletic Federation (TAF), 91-year-old Erdoğan Dulda collapsed midway into the race next to the Republic's founder Mustafa Kemal Atatürk mausoleum Anıtkabir and was taken to a nearby hospital.

"He was the symbol of Grand Atatürk Run. I spoke with him before the race. I even insisted he traveled from start to finish in a car. But he didn't give up on the race and we had this sad event. I offer my condolences to his family," TAF President Fatih Çintimar said.

Meanwhile, Ramazan Baştuğ from central Turkey's Aksaray province was the men's winner of the race with a time of 30 minutes 35 seconds. Elif Karabulut Dağdelen from Istanbul was the winner for women's with 34 minutes 31 seconds.

Organized annually since 1936, the race is named after Turkish Republic's founder Mustafa Kemal Atatürk. To honor the Turkish War of Independence, the race starts in Dikmen Keklikpınarı neighborhood of Ankara, where Atatürk made his entrance to the central Anatolian city after arriving to lay the groundwork for the independence fight.

The organizers said this year's run was attended by 1,487 runners.