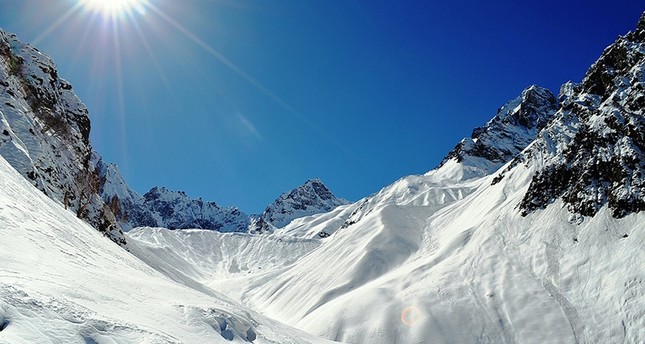 A Turkish skier has won in the Men's Giant Slalom category at the CAS Karakoram International Alpine Ski Cup in Naltar, northern Pakistan.

Berkin Usta dominated his opponents in the Men's Giant Slalom Category, while Ukrainian skiers Tsibelenko Levko and Nariichyn Andriy came second and third respectively at the event being held at Pakistan Air Force's (PAF) Ski Resort, a statement by the PAF said.

The Turkish Embassy in Islamabad congratulated Berkin over his victory.

"Congratulations to Turkish skier Berkin Usta for his victory in the Men's Giant Slalom category on the opening day of Third CAS Karakoram International Alpine Ski Cup being held at the scenic PAF ski resort in Naltar," the embassy tweeted on its official account.

Ukrainian skiers Tikun Tetyana and Anastasia Gorbunova got the first and second positions in the Women's Giant Slalom, while Pakistani skier Umama Wali came third in the category.

It was surprising to see Bosnian Ambassador to Pakistan Saqib Foric also take part in the racing alongside the world's top-ranking skiers.

Holding this event provides a boost to the tourism industry of Pakistan and opens doors for the revival of international sports in the country, the PAF said in its statement.

Share on Facebook Share on Twitter
Previous in Sports Cleveland Cavaliers forward Cedi Osman was selected to play in the... Next in Sports Amid shoes being thrown in insult, Qatar won its politically charged...
DAILY SABAH RECOMMENDS