Veteran vs youth for title in Rams-Patriots Super Bowl 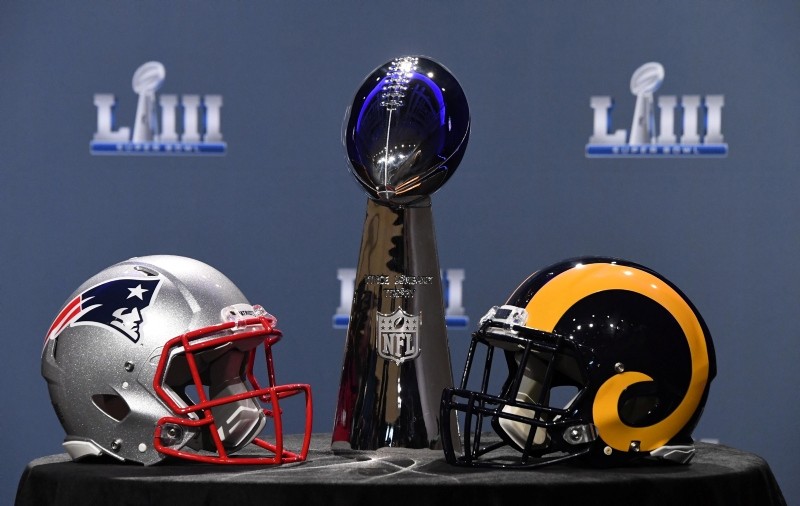 The Vince Lombardi Trophy and helmets for the New England Patriots and Los Angeles Rams are displayed before the Roger Goodell press conference in advance of Super Bowl LIII at Georgia World Congress Center. (Reuters Photo)
by Anadolu Agency Feb 02, 2019 12:25 am

The New England Patriots will face the Los Angeles Rams in Super Bowl LIII on Sunday at the Mercedes-Benz Stadium in Atlanta, Georgia, with a chance to win the team's sixth title in franchise history

The New England Patriots will face the Los Angeles Rams in Super Bowl LIII on Sunday at the Mercedes-Benz Stadium in Atlanta, Georgia, with a chance to win the team's sixth title in franchise history.

The NFL championship game will be a rematch between two teams who played each other 17 years ago in the title game.

The then St. Louis Rams lost Super Bowl XXXVI to the Patriots that began a string of near dominant seasons lead by head coach Bill Belichick and quarterback Tom Brady.

Super Bowl LIII will be the ninth championship appearance in 18 seasons for Belichick-Brady – more than twice as many as any coach/quarterback duo in NFL history.

Winning five titles in eight appearances, the Patriots will take the field in hopes of lifting the Vince Lombardi trophy for the sixth time to catch the Pittsburgh Steelers, the only team that has won that many in the Super Bowl era that began with the 1966 season.

The Rams will look to bring home an NFL championship for the fourth time. It is the only team in the NFL history that has collected three titles in three different cities. It won the championship representing Cleveland in 1945, Los Angeles in 1951 and St. Louis in 1999.

Opposite the Belichick-Brady duo, the Rams' hopes rest on Sean McVay who was named head coach in 2016 as the youngest in NFL history.

McVay, who turned age 33 on Jan. 24, will be the youngest coach to appear in a Super Bowl game when he takes the field Sunday.

The Rams will also rely on the arm of quarterback Jared Goff and running back Todd Gurley, both 24, who were first-round picks in the NFL draft.

The cities of Los Angeles and Boston are far away from the host city of Atlanta, and attendance is expected to be lower for the game than in past Super Bowls. But prices are still staggering.

The cheapest seats in the stadium were going for $2,420 in the nosebleed section, as of Thursday. The highest fee for a suit was sold at $325,000, according to online ticket exchange company StubHub.

Accommodation is an additional charge for the most fans who want to attend. The nightly rate for a family of four comes in at an average price of $1,717 and costs above $5,000 for three nights, according to Airbnb.

More than 300 rentals are charging more than $1,000 per night with the cheapest accommodation options vary between $300 and $500.

For those who can't afford or go to the big game, there is a lot of company with 182.5 million viewers expected to watch Super Bowl LIII, according to the National Retail Foundation (NRF).

Last year's game was seen by 103.4 million viewers across the U.S., according to Nielsen data – the least watched Super Bowl since 2009.

The NRF projects retail expenditure for this year's Super Bowl to total $14.8 billion – the third highest in history after the years of 2016 and 2018.

Super Bowl parties mean one thing: Food, and a lot of it.

The National Chicken Council estimates a record 1.38 billion chicken wings will be consumed this year, up 2 percent, or 27 million more, from last year.

American television network CBS will broadcast the game and is charging between $5.1million and $5.3 million for 30-second commercials.

The NBC network last year had ad revenues of $414 million by charging an average of $5.24 million for a 30-second slot.

And three-time Grammy-winning rock band Maroon 5 will take the stage as the headliner during half-time. The band will be joined by rapper Travis Scott, and Atlanta rapper Big Boi.