Body recovered from wreckage of plane identified as footballer Sala 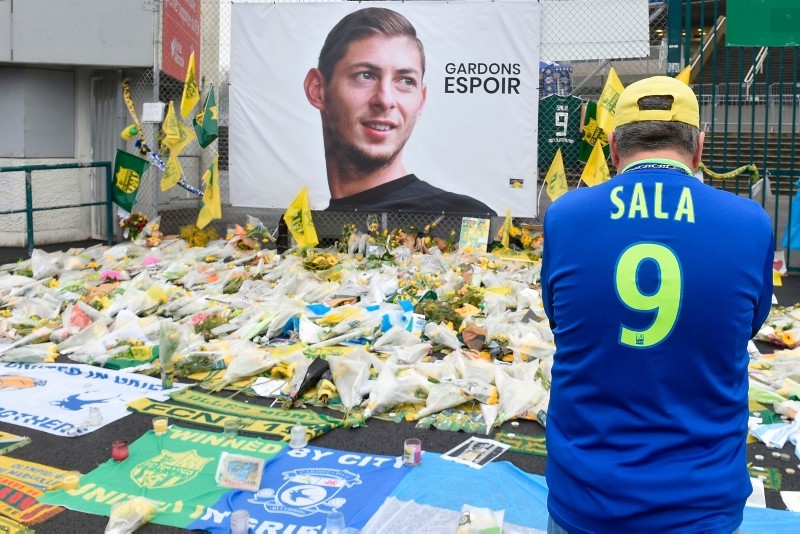 A supporter stands in front of flowers placed in front of a giant portrait of Argentinian former Nantes' forward Emilianio Sala outside La Beaujoire stadium (AFP Photo)
by Compiled from Wire Services Feb 08, 2019 12:00 am

Police have confirmed that the body recovered from a plane in the English Channel is that of Argentine soccer player Emiliano Sala.

Dorset police made the announcement on Thursday evening after a coroner's examination of the body, which was recovered from the seabed wreckage of the plane on Wednesday.

"The families of Mr Sala and the pilot David Ibbotson have been updated with this news and will continue to be supported by specially-trained family liaison officers. Our thoughts remain with them at this difficult time," officials said.

Sala, who had just signed with Premier League club Cardiff, and pilot David Ibbotson were the only people onboard the small aircraft that disappeared over the English Channel last month.

The Argentinian footballer was travelling on a PA 46 Malibu plane from France to Wales after signing for Cardiff City when the light aircraft disappeared from radar over the English Channel.

After the official search was called off on January 24, 260,000 pounds (340,000 dollars) was raised to fund a private operation, which saw two vessels, including one commissioned by the AAIB, using sonar to scan an area of around four square nautical miles (13.7 square kilometres).