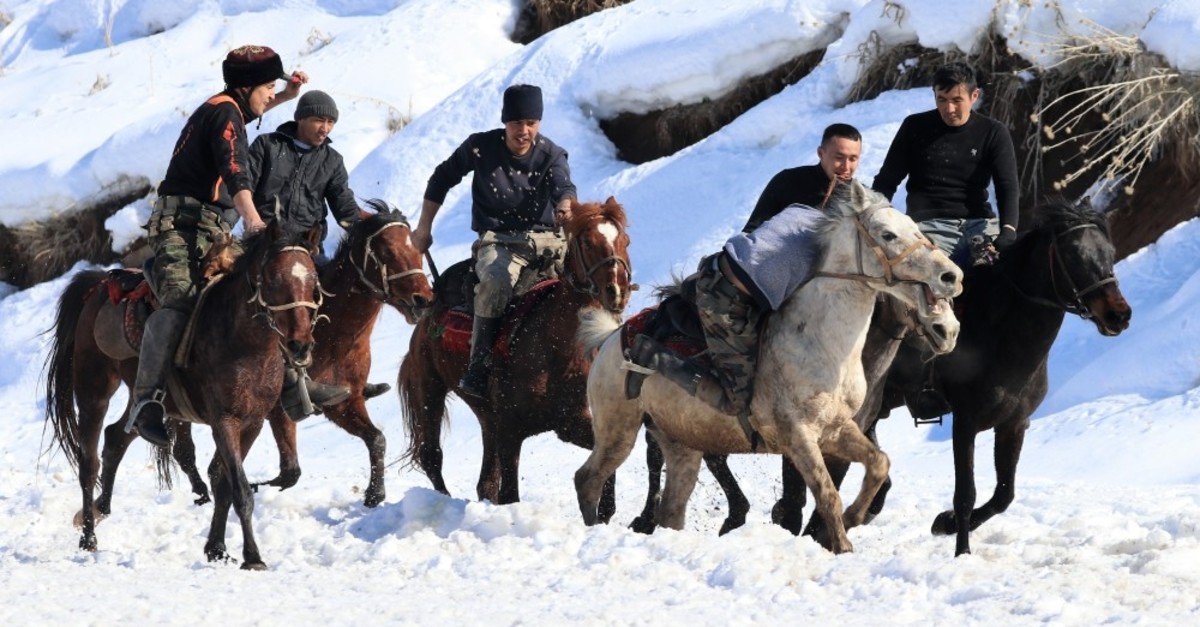 Galloping past snow-covered village squares, riders swoop in and lower themselves down to the "ulak," or goat's hide. Once they get hold of the hide, which has replaced the animal carcass their ancestors used, they take it to the goal to score. Kökbörü, as this ancient sport is called, has been revived by the Kyrgyz who settled in eastern Turkey decades ago. Today they practice the sport for the upcoming World Nomad Games.

In Erciş, a district of Van province, Kyrgyz riders from Kökbörü Sports Club gather in a village square for practice, braving cold, snowy weather. It might be a simple task but many come close to injuring themselves in the process as fast horses and struggles in close quarters lead them to fall occasionally. This doesn't deter them from playing the sport whose history dates back 5,000 years ago, to Central Asia.

Riders will represent Turkey in the kökbörü category in the upcoming games whose fourth edition will be hosted by Turkey next year. They hope the sport, which originated in the military training exercises of ancient Turkic soldiers, will become more popular in the country. Rıdvan Ufuk, one of the riders, say they endeavored to keep the ancient tradition alive and participated in competitions abroad. About the game, Ufuk says it takes team spirit like in other sports to succeed in kökbörü. "It is a dangerous, tiring sport and we fall from horses from time to time. Sometimes, they crush us. We have teammates whose hands, feet have broken but they return to playing it after recovery. This is in our blood," he told Anadolu Agency (AA).

Riders are luckier this year, he adds, noting that more snowfall compared to previous years has made the ground softer, cushioning the fall. Mustafa Timur, another rider, disagrees. "It is more difficult to play on the snowy ground. It takes more to guide the horses and stop them. You have to act like acrobats to halt them," Timur says. Still, he and others are just a

s eager as they were before. "We bought new horses this year just to train for the games. We also have new players. The youth are especially enthusiastic," he says.

Kökbörü was recognized by UNESCO's Representative List of the Intangible Cultural Heritage of Humanity in 2017. The game is considered as "an expression of the cultural and historic tradition and spiritual identity of its practitioners and serves to unite communities regardless of social status, fostering a culture of teamwork, responsibility and respect" by UNESCO.

Van hosts a sizeable Kyrgyz community who left their homeland in the Pamir Highlands near Afghanistan following the Soviet invasion of Afghanistan in 1979. Most are settled in Ulupamir village and preserve their culture as well as their semi-nomadic lifestyle there.