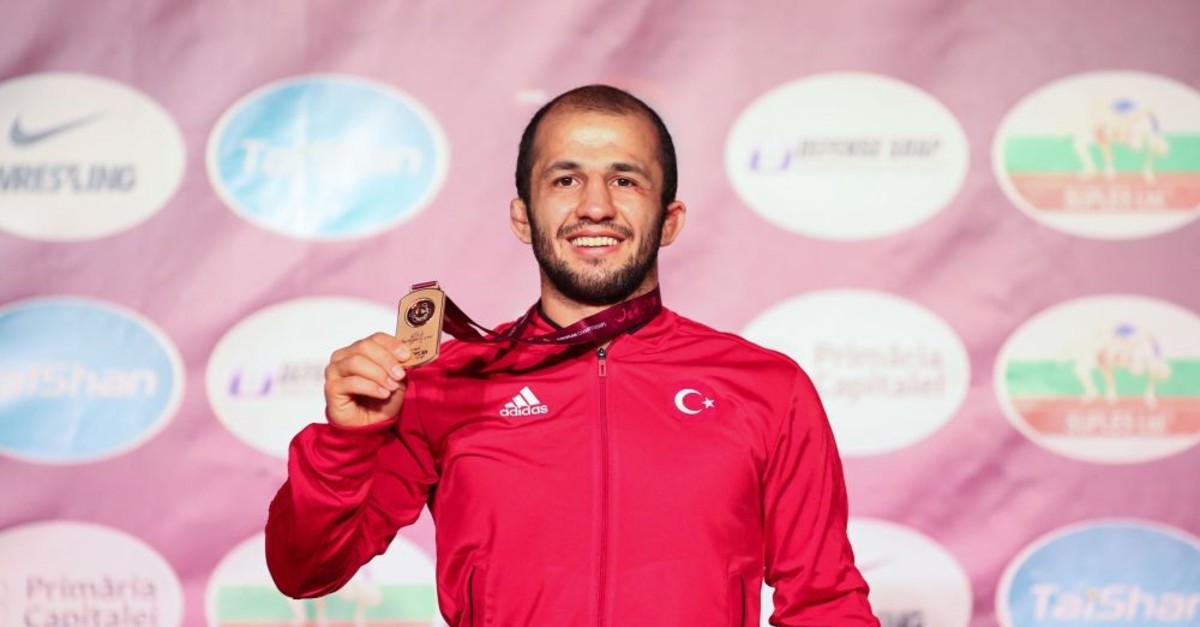 Turkish wrestlers won four medals, including two gold, at the European Wrestling Championships in Romania, while the former holder of the top European title Taha Akgül heads into the finals

Turkey has continued to impress in the European Wrestling Championships, winning two gold, one silver and one bronze medal in the first two days of the tournament in Bucharest, Romania. Turkish wrestling legend Taha Akgül, in the meantime, a multiple European and world titleholder also made it into the finals in his category.

Atlı impressed fans with an 8-3 win against Russia's Muslim Sadulaev, the reigning champion of the Ivan Yariguin Grand Prix. Atlı, winner of a bronze medal in the 2018 World Championships, scored a takedown and transitioned into a pair of gut wrenches, bringing him six points and rendering Sadulaev helpless in the face of a subsequent takedown. His win put Atlı ahead of Russian world champion Zaur Uguev for the top spot in the 57-kilogram world rankings. Speaking to Anadolu Agency (AA) after his victory, Atlı said he wanted to repeat his success in the upcoming world championship as well as in the Tokyo 2020 Olympics. This is the 24-year-old wrestler's first top European title and he credits his success to a tough training regimen. "I knew it was time for gold, and thank God, I didn't disappoint my fans," he said. The young wrestler has come a long way from two bronze medals in World and European championships in 2017 and 2018 and says his performance is "improving." "Turkish wrestling gained serious momentum in the last few years and I expect my teammates to win more medals," he added. The tournament, which started on April 8, will continue until April 14.

Mustafa Kaya brought Turkey's second gold when he defeated Azerbaijan's Aghahuseyn Mustafayev 6-0. Kaya was a bit shaken in the opening period after a frustrating failure in a takedown but overcame the odds in the second period.

In the freestyle 79 kilogram category, Muhammet Nuri Kotanoğlu won bronze with a 5-1 win over his Ukrainian rival Oleksii Domanytskyi, after a disappointing quarterfinal against Russia's Akhmed Shiabdinovitch Gadzhimagomedov.

Selahattin Kılıçsallayan, who competed in freestyle 65 kilos, managed to reach the finals but had to take home silver when Azerbaijan's Haji Aliyev defeated him 7-0. Overall, the Turkish team collected 87 points behind Russia's 95 points. Azerbaijan ruled the team scores with 100 points.

Olympic champion Taha Akgül joined Azerbaijan's Sharif Sharifov and two-time world champions Frank Chamizo of Italy and Geno Petriashvili of Georgia for the finals after all won their semifinal matches. Akgül and Petriashvili scored wins against opponents who they've previously lost to, setting up a rematch of last year's European finals. Akgül, who competes in the 125-kilogram freestyle category, defeated Russia's Ruslanovitch Khizriev 8-1. Turkey's İbrahim Bölükbaşı lost to his Polish rival Zbigniew Mateusz Baranowski in the 92-kilo semifinal, while Fatih Erdin lost to Moldova's Piotr Ianulov 2-1 in the 86-kilogram semifinals.