'Nothing has changed' for seven-time European wrestling champion 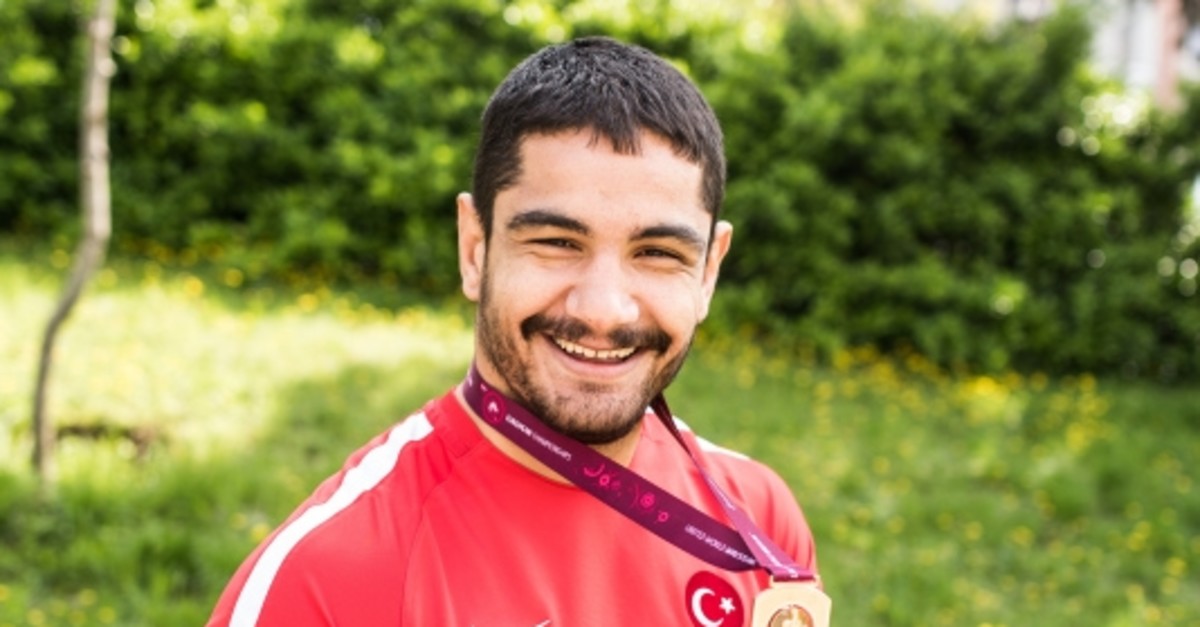 Along with seven gold medals in European championships, Akgu00fcl boasts an Olympic gold and two world titles.
by Serkan Ünlü May 02, 2019 12:07 am

Twenty-nine-year-old Taha Akgül, a rising star of Turkish wrestling, shares the spotlight with Rıza Kayaalp when it comes to winning gold medals in international competitions.

Fresh off the victory in the freestyle 125 kg category of the European wrestling championship in Romania last month, Akgül spoke to Daily Sabah. "The win has changed very little in my life other than motivating me for taking on the next challenge. I have many titles but nothing has changed for me. I wake up every morning like it is my first day in my professional career and train. In a way, I start from scratch again and again," he says.

This is Akgül's seventh gold in European wrestling championship. He also has an Olympic gold medal and two world titles, making him one of the best of his generation in Turkish wrestling. The key to his success varies but ultimately, he pins it on "genetics of this country." After all, this is a country boasting one of the oldest oil wrestling competitions in the world in Kırkpınar that traces its roots to the early days of the Ottoman Empire. A humble athlete despite his international accomplishments, Akgül sees himself still at the start of a professional career and never skips training.

Born in central Turkey's Sivas, the hometown of living legends of wrestling, like Olympic champions Ahmet Ayık and Hamza Yerlikaya, Akgül hails from a family interested in wrestling. His wrestler father Recep sent his two children to Wrestling Education Center, a boarding school focusing on raising a new generation of wrestlers, in their childhood.

Akgül's life story resembles that of popular Indian movie, "Dangal." Like Mahavir Phogat in "Dangal," who strives to train his daughters to go for gold, Akgül's father was enthusiastic and ensured his sons would become accomplished wrestlers.

"I was 12 when I started wrestling. This is an ideal age to start because younger children may not be able to accept defeat. Wrestling is a sport that also educates one," Akgül's says.

Not content with only training at the school, Recep Akgül would personally train his children on the weekends, taking them to the countryside for training in the open air. "We were always training and I'd sometimes wrestle my father. His efforts made me who I am today," he acknowledges.

His brother also went on to be a national wrestler but retired after he failed to find international success. He works nowadays as a trainer for young wrestlers seeking to join the national team.

Akgül is a fan of Hamza Yerlikaya, "the wrestler of the century" as he is called in Turkey. Akgül is short of one European title compared to Yerlikaya, a two-time Olympic champion, three-time world champion and eight-time European champion.

"I used to watch his bouts and they used to motivate me. I remember how I raced with other children to welcome him whenever he came to Sivas after winning a title," Akgül says.

The 29-year-old cannot imagine a life without wrestling. "I wasn't as huge as I am now when I was younger," Akgül says, adding that he did not have a clue if he would "develop so much" to have his current physique. "I could pick other sports like basketball or boxing if I knew I would be this huge. In the end, it was my father who picked the right sports branch for me and I am grateful for that. I wouldn't win European, world and Olympics title if it wasn't for him," he says.

The sport put a hurdle to his education life but Akgül endeared himself to capital Ankara where he trains at ASKİ wrestling club. He got into a university in the western city of İzmir, where he would study to be a teacher, but decided to skip college so as not to impede his strict training regime. He ended up with ASKİ Spor and says signing with the club was a turning point in his life.

"The club taught me a lot about wrestling and I really liked Ankara. This city gave me a lot of opportunities to train. We have good training facilities and a fine countryside for outdoors training," he says. He later resumed his college education and is now a physical education studies graduate. He plans to pursue an academic career once his wrestling career comes to an end.

He is not very ambitious but says he is ready for the next challenge, including next year's Tokyo Olympics and the World and European championships before that.

"I want to do a hat trick. If I get a good result in Tokyo, I'll work for the 2024 Olympics. I don't think I'll be too old then. Age does not matter as long as you are capable of wrestling," he says.

Asked about if he ever wanted to do oil wrestling, a rougher form of wrestling that is played outdoors, Akgül says he was enthusiastic about it. "People want to see me in Kırkpınar, thinking I am suitable for the competition because of my physique. I want to compete there too but now my priority is my career on the mat. Competing in Kırkpınar may affect my freestyle performance," he adds.

On his training regime, Akgül says he is strict on not missing any daily training. "I lead a disciplined life and do not deviate from my healthy diet and sleep. I prepare for every competition like it was my first competition. If you train enough, you can beat the stress of fighting for medals," he says.

Another key to Akgül's success is training partners. The wrestler was complaining about not being able to spar with wrestlers of his weight in training before the Sports Ministry brought in three famed heavyweight wrestlers in Turkey for his training. "It helped me improve my performance and I learned a lot from them. I think this was one of the things that brought me gold in the European championship," he adds.