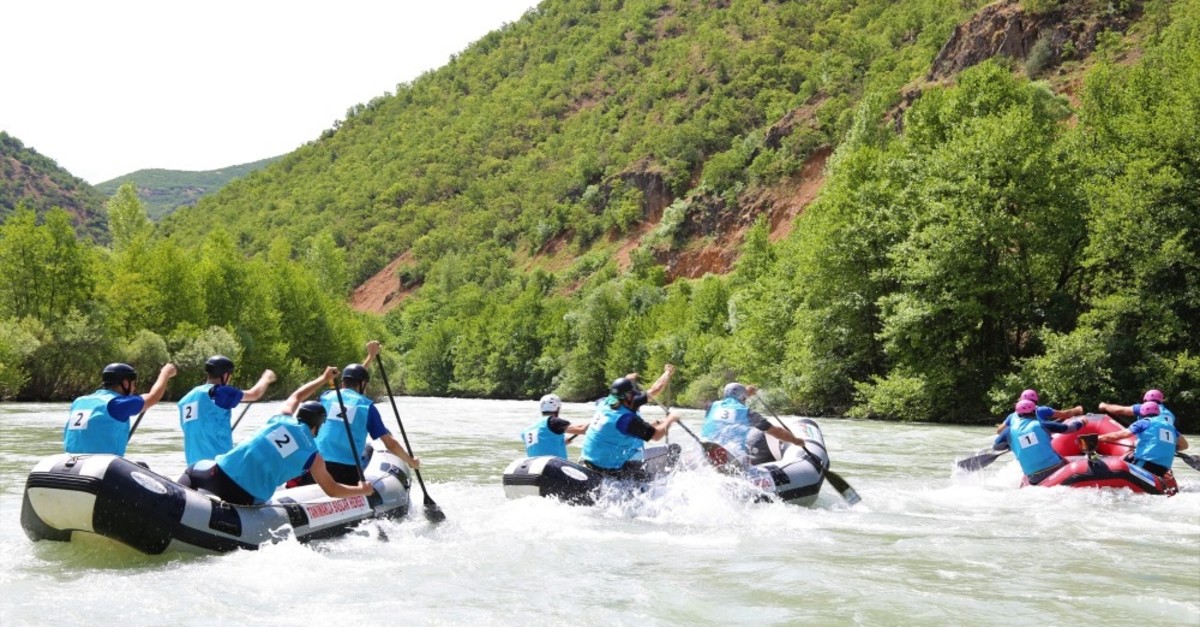 Tunceli, a small eastern city, hosts the World Rafting Federation's Senior World Championships for the first time ever. Rafters from around the world look to tackle the raging waters of the Munzur River

Rafters from around the world took to Munzur River on Monday, the first day of World Rafting Federation's Senior World Championships. The event held in Turkey for the first time, is a showcase for Tunceli, a small eastern city whose Munzur River has been a favorite location among local rafters, to open to the world.

After a training session over the weekend and a nighttime parade, 23 men, 12 women and 13 mix teams from Brazil, Bulgaria, Chile, Croatia, France, Georgia, India, Italy, Kazakhstan, Russia, Serbia, Slovakia, Ukraine and Turkey returned to the Level 3 river that straddles through a lush valley. A clear sky and a water temperature floating around 10 degrees Celsius met rafters who paddled in a 5-kilometers downriver race through a semi-artificial course designed for rafting races. The course, 950 meters above the sea level, will host RX competition today and the championship will end on June 12 with a slalom race.

A landlocked province and long plagued by terrorism, Tunceli has become one of the top water sports destinations in the country over the last few years thanks to the investments in its rivers and lakes. Home to the 36-kilometer-long Munzur River, Tunceli has previously hosted numerous water sports events, including water skiing and windsurfing.

"Since 2013, we have accomplished great things in terms of rafting in Turkey. In order to sustain this success, we continue to work hard and invest in the infrastructure. After hosting Turkey Rafting Championship May last year, Tunceli proved it was ready to host international events as well," said Yardımcı.

Speaking at the opening ceremony, Tunceli Governor Tuncay Sonel said that they were happy to host rafters from 20 countries and some 800 guests including delegations for the event and show them Turkish hospitality.

"Tunceli is a fascinating place with its historic and natural beauties, from Pülümür and Munzur rivers to locally-produced honey and Şavak cheese. In winter, we host skiers in Ovacık [town] and today, we are proud to host you," he said.

World Rafting Federation President Danilo Barmaz said they were pleased to hold the tournament in Tunceli for the first time and thanked the locals for their hospitality.

"This is a big event and we have an amazing organization here and a brilliant course," Barmaz said.

With its ever-flowing streams and rivers, Turkey is a top rafting destination though the lack of facilities and transportation made it difficult for the country to tap this potential for years. Today, 48 provinces host facilities including artificial tracks and attract rafters from around the world.

Rafting in Turkey has long been considered an extreme adventure sport and only those who dared to put on a helmet got into rafting canoes and let the river and white rapids carry them downstream. However, government-sponsored efforts to promote rafting for people of all ages, made it popular in recent years and drew international rafting events to the country.

Tunceli is located south of the Black Sea region deemed the most suitable region in Turkey for rafting, thanks to its geography. The high mountains and rainy weather in the region allows the rivers of the Black Sea region to remain at a suitable level year-round, beckoning adventure seekers to experience the thrill of rafting. Officials have been encouraging local management companies to open rafting facilities in Eastern Anatolia, as well.