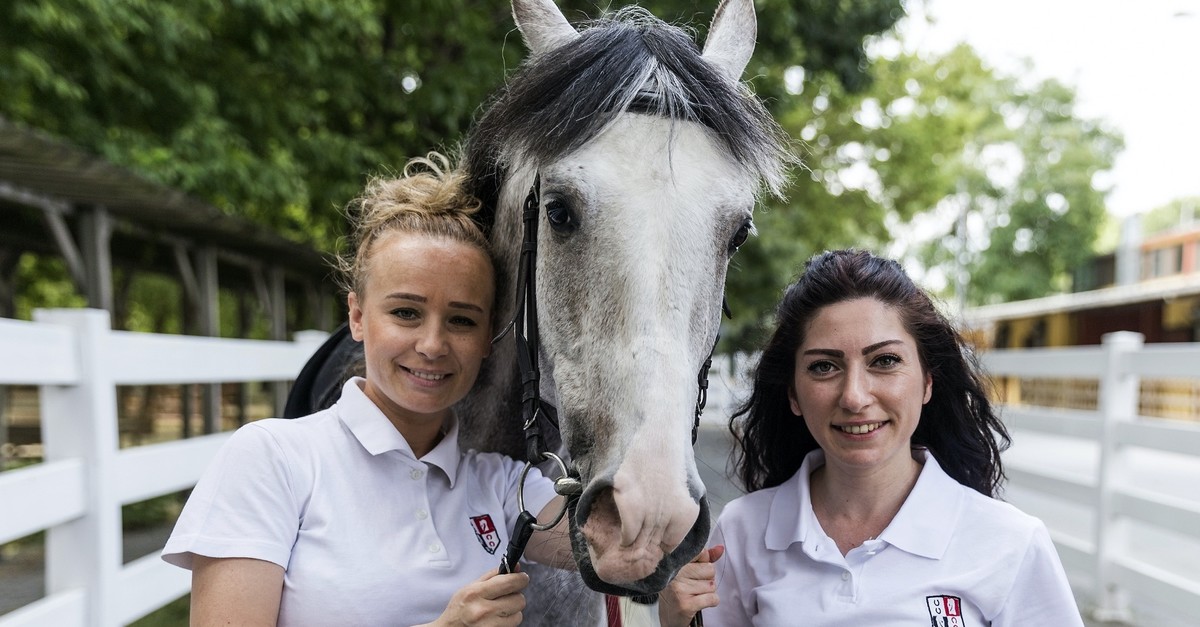 In the male-dominated sport of horse riding, Serap Berber Göz and Sinem Aydın are among Turkey's only nine female jockeys.

A rare breed, so to speak, the duo has been in the sports for about two decades and apart from their accomplishments on the racetrack. They are known for their charity work for mentally and physically disabled children at the Horse Therapy Center of Turkish Jockey Club, where they teach children how to ride.

Göz, whose family is from Greece's Western Thrace, a region predominantly inhabited by the local Turkish community, took up riding by sheer coincidence. "I was visiting my uncle in Greece and he told me about the female jockeys in Europe. Others advised me to try the horse riding since my stature, my physique was appropriate for it. I was curious and decided to apply to a jockey training center when I returned to Turkey after I graduated from high school. After two years of training, I got my professional riding license. There was only one other female jockey in Turkey when I started racing," she said.

What made her stick to the profession was an emotional moment. "I fell off the horse during a training session and I was in such a position that the horse could trample on me with all its four legs. Amazingly, it managed to jump over me, without touching me. I saw it almost flying. It was, like, she did not want to hurt me and really valued me. That was when I decided to pursue this job wholeheartedly," she said.

Years of training paid off and Göz secured third place in the prestigious Gazi Race in 2009, her first truly professional race. That year also brought her a top title in the female jockeys' stage of the Prime Ministry Cup. Giving birth to her first child forced Göz to take a break but she says she will resume soon. "I can't quit. This is a way of life for me," she said. For the past four years, Göz has also worked as a trainer at the Horse Therapy Center. "I teach riding to my disabled brothers and sisters. We work to keep them happy and I saw many miraculous recoveries here," she said.

Being a woman can be advantageous in horse riding, she claimed. "Horses do better when the rider is a woman. They definitely can sense if the rider is a woman or man. They can feel it with the way you touch them, from your voice. They are calmer when a woman rides. I saw my boyfriend struggling to keep control of a horse he rode and that animal was so easygoing when I rode it. It was like he was carrying a baby, walking gently, when I rode him," she recalled.

Sinem Aydın joined the jockey school in 2001 when she was 16. Like Göz, her love for racing stems from a relative's advice. "My father was very fond of horse racing. One day, he jokingly told me if only I could be a racer. My mother took it seriously and started searching for a jockey school. One thing followed another and I applied to the school," she said. She says it was difficult to be a woman among "so many male jockeys" and it was only after her and Göz that more women started taking up professional horse riding. "Riding means a lot to me. It means freedom first of all. You feel disconnected from the rest of the world while riding," she said.

It also means socializing, Aydın says, talking about the therapy work she does with disabled children.

"Some children who never speak start speaking when they spend more time here. It is not just about the development of their muscles by riding, it is really more than that," she added.