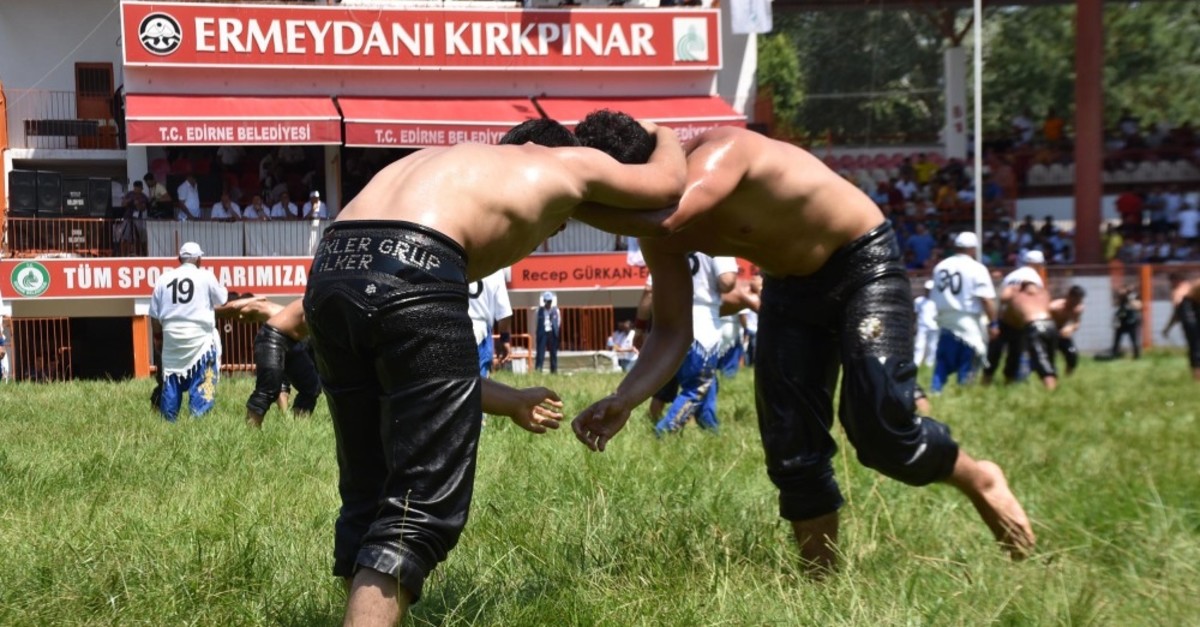 Northwestern Turkey's Edirne has once again become the battleground for an ancient sport event where wrestlers compete to win a golden belt and honor a centuries-old tradition.

The Kırkpınar Oil Wrestling Festival, which began Friday, is one of the world's oldest sports events and has been held annually in the province since 1362, with wrestlers engaging in a physical and mental struggle without the use of any equipment. In traditional oil wrestling, wrestlers wear leather pants, rub olive oil on their bodies and tackle each other on grass fields to be the last man standing, which will earn them the title of Chief Wrestler (Başpehlivan) and the right to wear the prestigious golden belt for a year. "Oil wrestling unites people across our country, and I'm proud of being part of this ancient tournament that has been going on for centuries. It reflects our culture," Ali Gökçen, an experienced wrestler, told Anadolu Agency (AA).

Forty-year-old Gökçen, with 25 years of experience in Kırkpınar wrestling, said local traditions were the main dynamics creating a national identity, and the Kırkpınar festival, in this context, played a huge role in shaping Turkish culture. "Wrestlers from various provinces come to the city of Edirne to mark this festival and our culture. We start with prayers, read our national anthem, remember famous wrestlers and respect our cultural heritage with the young generation of wrestlers hanging around," he said. Deputy Mayor of Edirne Ertuğrul Tanrıkulu said the local municipality and state authorities did their best to ensure the survival of the historic Kırkpınar oil wrestling festival as it is directly related to the Turkish culture. "We try to preserve this sports event in its original form," he said, adding the rituals have been the same for centuries and even the revisions were carried out in line with the traditional understanding of wrestling.

With 2,380 registered wrestlers and fully booked hotels, the province treats the 658th edition of the festival as the main event of the year. For three days, wrestlers of all ages and weights will compete for the ultimate prize: a golden belt. This year's event will be more challenging as organizers, determined to revive the spirit of old-school oil wrestling, a sport widely popular in most cities of Anatolia, changed the rules for more action. Wrestlers will compete in a 40-minute, non-stop bout instead of a bout of 30 minutes that used to be extended 10 minutes more with a five-minute break if there was no winner.

A win requires one wrestler to put his rival's back on the ground but it is a tricky affair as both men are covered in olive oil, making it almost impossible to get a good grip on the rival. Under new rules, the winner of a bout will be chosen by "golden points" handed out by referees if the 40-minute bout ends with both wrestlers still standing.