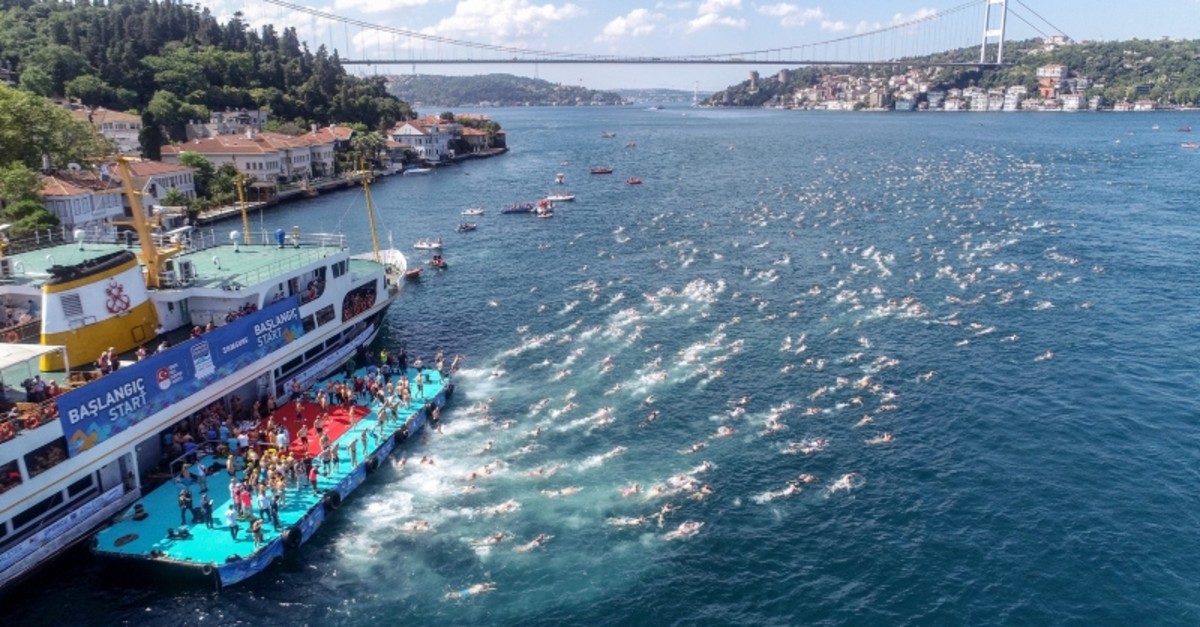 The Bosporus, an iconic waterway that divides Istanbul, was unusually calm in the early hours on Sunday where a throng of oil tankers, cargo vessels and passenger ships are usually sailing. Then came hundreds donning swimsuits who jumped into the lukewarm waters.

Some 2,400 swimmers from 59 countries competed in the 31st Bosporus Cross-Continental Swimming Race, an annual event which is described as one of the best open water swimming events in the world. In the end, it was Turkish swimmers who grabbed top spots in the men's and women's category.

Against the backdrop of the July 15 Martyrs' Bridge, waterfront mansions and mosques adorning Istanbul hills, swimmers dived into the waterway from the Kanlıca pier on the city's Asian side. The Bosporus, which connects the Black Sea to the Aegean via the Sea of Marmara was closed to maritime traffic for the race. It took swimmers of all ages and from all walks of life 6.5 kilometers to complete the course that ended at Kuruçeşme, a pier adjacent to popular seaside lounges and clubs and a yacht pier, on the city's European side.

Organizers say they received a record number of applications this year and had to choose from 2,971 applicants. Some 1,200 Turkish swimmers took part in the race after winning qualifiers held in Ankara, Istanbul, İzmir, Adana and Samsun. The other 1,200 participants traveled from abroad. Swimmers from Indonesia, Oman, Pakistan, Peru and the Philippines competed in the race for the first time. The race included swimmers of all ages, from 14 to 89.

Düğen, a professional swimmer with multiple medals in international events, joined the race for the first time. "I am so happy, I never expected to win. It is my first time in the open water," Düğen told reporters after the race.

"It was all fine until I was near Galatasaray islet. There was a bit reverse current and it was a painful stage for me," Düğen said, referring to the islet near the finish. But the pain, on the other hand, "motivated" him, Düğen said, vowing to compete again next year. Düğen now looks forward to the European Junior Championship in Hungary where he will represent Turkey. "It is hard to qualify for Tokyo 2020 but my goal is to compete in 2024," he said.

Ilgın Çelik, who came in fifth in last year's race, says she was "accustomed a bit" to top places in swimming but she was still excited. "This is a great pride, both for me and my trainers who worked hard day and night to prepare for the race," she said. Like Düğen, Çelik complained of the strong current. "You have to jump almost every moment because of waves. The stage near the Galatasaray islet was particularly challenging. It was worse than last year," she said.

A country surrounded by seas, Turkey has few international figures in professional swimming but seeks to shed this image. Youth and Sports Minister Muharrem Kasapoğlu, who was among those watching the Bosporus race, told reporters that they planned to teach swimming to 1 million people by the end of next year. "We will use every means possible to reach out to more people and apart from existing swimming pools, we can cooperate with the private sector for building more pools. We will reach out to people of all ages and in the end, we want to crown our work with professional swimmers we'd train and hopefully they will bring top titles to Turkey in international events," he said.