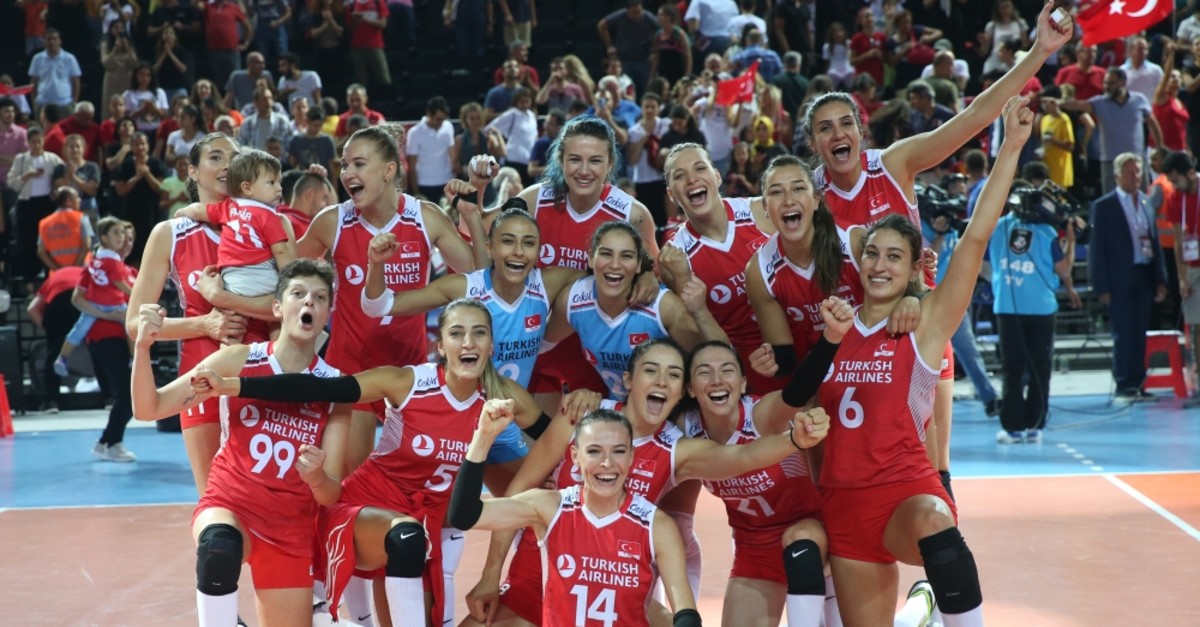 Turkey's "Sultans of the Net" secured a place in the EuroVolley Women's European Volleyball Championship quarterfinals after surviving a critical bout against Croatia in Ankara Sunday.

The national team beat its rival 3-2 in the last 16 round to clinch a spot in the quarterfinals against the Netherlands.

The first set in front of more than 8,000 home fans started a bit stilted for players, who only lost to Serbia so far in the tournament that started on Aug. 23.

It was captain Eda Erdem Dündar and outside hitter Fatma Yıldırım who set the pace late in the game to bring the much-needed victory for the Turkish side. 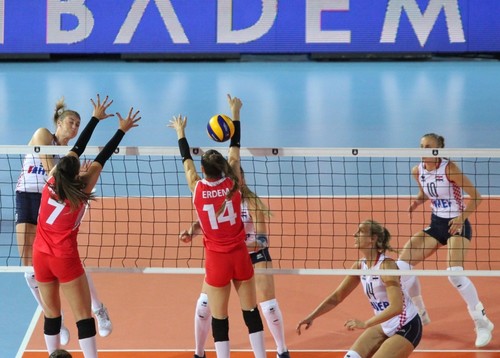 Eda Erdem Dündar in action against Croatia in the game in Ankara, Sept. 1, 2019.

The first set ended with a 3-1 loss though Turkey pursued balanced gameplay. The Sultans lagged behind Croatia in offense and it was only after the first break that they went all-out offensive and unleashed their potential.

Dündar's spiking assault helped Turkey to reach a 14-13 tiebreaker and the first set ended 26-24 or 1-0 for Turkey thanks to Gözde Yılmaz's successful defense. The second set saw some much better displays from Turkey, and Dündar once again brought 7-4 supremacy for the team with her spiking.

Croatia, nevertheless, did not give up and aggravated assault with Ikic, Samadan and Brcic who helped Croatia to get the upper hand with 11-9. What followed was lowering morale for the team that lost team spirit for a while and failed to overcome errors on offense, leading to a 22-17 score.

The second set ended 25-18 in favor of Croatia. Turkey again fell behind expectations with a bad start to the third set. Dündar again was key for the team to secure a 4-4 equalizer but defense errors dragged them behind Croatia that went on to bring the score to 14-11. The Sultans quickly recovered and secured a 21-20 tiebreaker. However, Croatia's Ikic carried her side to the third set victory in the last minutes and Croatia wrapped up the set 33-31.

In the fourth set, it was Fatma Yıldırım who fired up the team in the fourth set. The 29-year-old Fenerbahçe player took the score to 8-7 for Turkey with consecutive attacks. Kübra Çalışkan and Meliha İsmailoğlu reinforced the defense while Yıldırım kept spiking until Turkey reached 17-14. The fourth set was a showcase of Yıldırım and Dündar's talents and the duo brought a tie with Croatia in the end with a score of 25-22.

The last set started with a perfect score by Meliha İsmailoğlu and repeated offensive by the Turkish side forced Croatia to call for a break. Yet, things only got worse for Croatia after the break with the Sultans bringing the score to 6-0. Another lull in the offense on the Turkish side took Croatia to an 11-11 draw but in the last minutes, Turkey fired up the offense again. Dündar's score secured a 16-14 finish for Turkey.

Turkey is ranked number five in Europe and have three EuroVolley medals, a silver from 2003 when they hosted the event, a bronze in 2011 when they beat Italy and another bronze with victory over Azerbaijan in 2017.

The Sultans of the Net are also the silver medalists of the inaugural FIVB Volleyball Nations League in 2018. Turkey has qualified once for the Olympics, finishing ninth at London 2012. They have also competed four times in the FIVB World Championship, with their best result being a sixth-place finish in 2010.