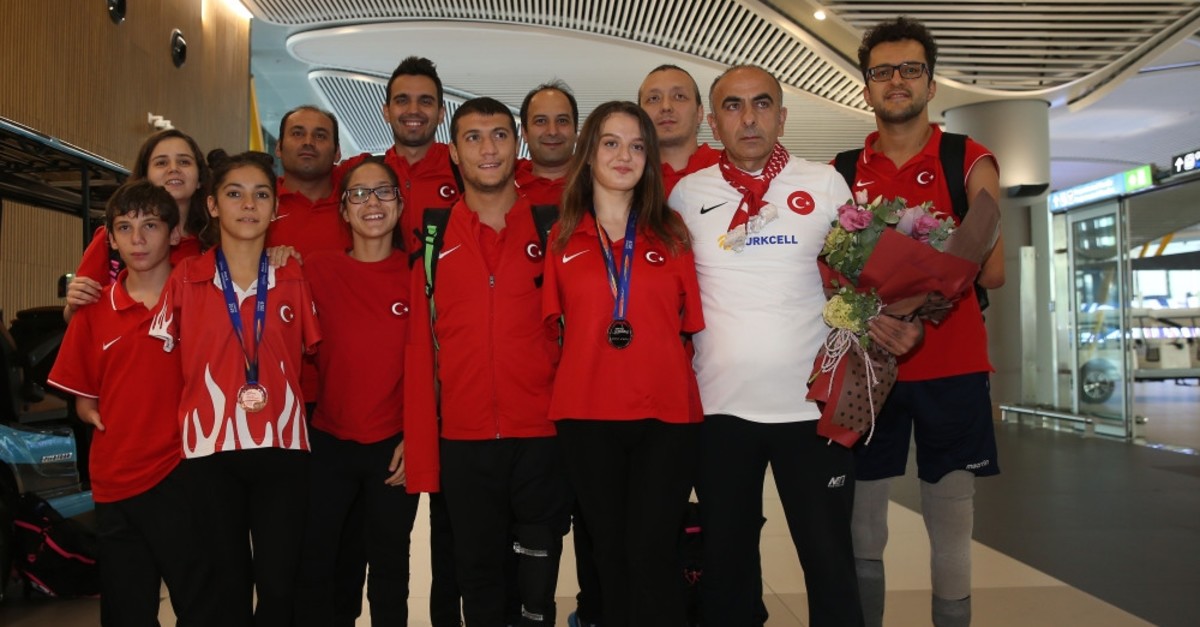 Sümeyye Boyacı and Sevilay Öztürk, who bagged medals in the World Para Swimming Championships over the weekend, inspire fellow Paralympic swimmers and have been heaped with praise for their unprecedented success that brought national pride

Two Paralympic swimmers enjoyed a spectacular success as they became the source of national pride while inspiring a new generation of swimmers with disabilities. Teenage swimmers Sümeyye Boyacı and Sevilay Öztürk won silver in women's 50-meter backstroke and won bronze in women's 50-meter butterfly categories, respectively, in the World Para Swimming Championships in London last weekend. They received a hero's welcome when they returned to Turkey on Monday. Yesterday, the duo was received by President Recep Tayyip Erdoğan, who had earlier telephoned Öztürk and Boyacı to congratulate them. Social media is also awash with congratulatory messages for the two girls "making the nation proud" in a sport that grabs only a little of the spotlight in the country. Boyacı, who has also added a European title to her name in her short career, was ecstatic over the win.

"I only came second because my rival touched my arm while approaching finish and with a time difference of 3 milliseconds. This was not an ordinary silver medal for me. It was a special, important race and I am grateful to everyone, from my fans to sponsors for their support," she told reporters after returning to Turkey. "This is extraordinary for me because I came in second after a 27-time Paralympic swimming champion, after someone 27 years older than me," 16-year-old Boyacı said. It is a distinguished feat for a young swimmer who competed in a world championship for the first time.

Sevilay Öztürk came in third, but she is happy to compete in an important championship. "I now want to win gold in the 2020 Paralympics so we can see the Turkish flag flying on the podium," she says.

Boyacı's win and accomplishment make her a role model for a younger generation of para swimmers. In the eastern city of Muş, 65 children with disabilities learn swimming at their local swimming pool under the guidance of professional coaches. They are all seeking success like Boyacı. The first swimming pool in the landlocked city, built just two years ago, now hosts children with mental and physical disabilities in free weekly swimming courses that started two months ago.

Emrullah Güler, head of the city's youth and sports directorate, told Anadolu Agency (AA) that they want help the children with their physical development and social inclusion, a problem for many in Turkey's disabled community.

"The families welcomed the swimming courses in particular. They tell us that their children had been introverts, unable to express themselves and with low self-confidence before they took the course. Swimming made major differences in the lives of those children," he says. Swimming trainer Abbas Oğlağo says most of his students saw a swimming pool for the first time and were at first afraid to dip their toes in the water. "Their families helped us to encourage them and now we see they don't want to stop swimming all day. Swimming also gives them a chance to release their energy so they can be calmer. We also see they have higher self-confidence now," he says. Fifteen-year-old Muhammed Aksoy, a physically disabled swimmer, says swimming changed his life.

Aksoy, who said he was confined to his room at home and spent hours in front of his computer, says he now barely spends time at home and made many new friends. "My morale is much better now," he adds.