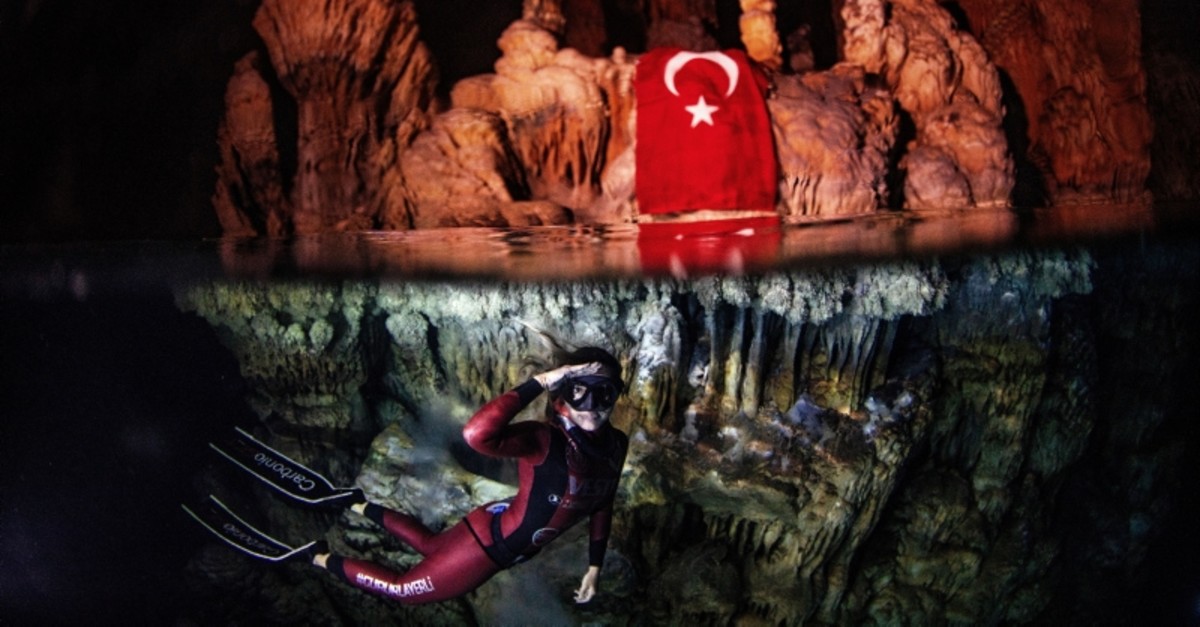 Multiple world record holder Şahika Ercümen on Monday broke the women's world record for cave diving without an air tank in Gilindire Cave in the southern Turkish province of Mersin.

In a 100-meter dive supported by Turkey's Ministry of Industry and Technology and the Çukurova Development Agency, Ercümen broke the 90-meter world record for cave diving without fins.

Ercümen aimed to enter the Guinness World Records with the historic free dive. She dedicated the dive to Republic Day, marked on Oct. 29, and saluted Turkish soldiers who are sacrificing their lives to defend the country.

Turkish athletes and soccer players have made the headlines recently when they made military salutes in international competitions as a tribute to soldiers who were carrying out a risky counterterrorism operation in Syria.

Ercümen swam a 25-meter course back and forth four times while holding her breath, and reaching a total distance of 100 meters. Speaking to Anadolu Agency after the attempt, Ercümen said she was "very stressed" going into the water. "I had a great responsibility, especially after I received messages from all around the country in support of the attempt. Still, I managed to do it, thank God. I can't describe my emotions now, but I can say I am proud," she said.

The 34-year-old diver trained for the record attempt at a swimming pool in Mersin before she started training in the cave itself. She first set her sights on breaking the record nearly a decade ago.

The Gilindire Cave, which is 555 meters long and 46 meters deep, is located on Turkey's southern coast, with its mouth facing the Mediterranean Sea. It was discovered by a shepherd in 1999 and dates back to the Ice Age. Stalagmites, stalactites and other formations decorate the interior of the cave.