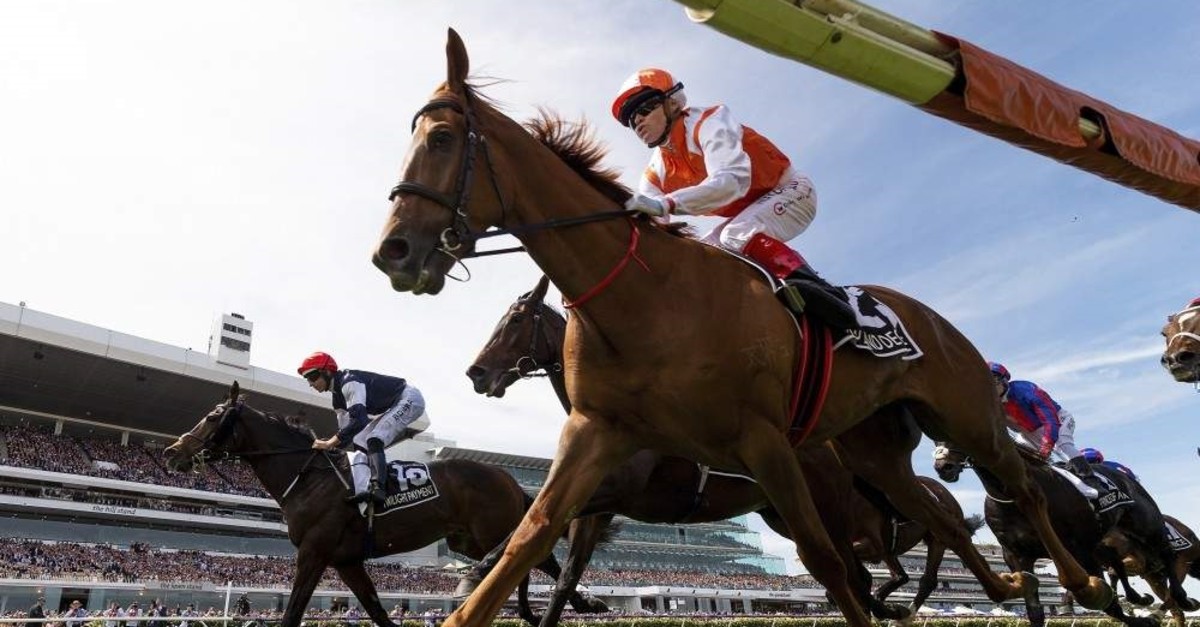 With veteran jockey Craig Williams in the saddle, 4-year-old Vow and Declare ended a decade of international domination in a thrilling finish to edge out Prince of Arran, Il Paradiso and Master of Reality for the famous 3,200-meter (2-mile) "Race that stops a nation." Twilight Payment set the pace until Danny O'Brien-trained Vow and Declare got up on the line to upset a field packed with overseas runners and containing only two Australian-bred horses. "I was lucky enough to sit on Vow And Declare. A credit to Danny O'Brien," said Williams, who now has a Melbourne Cup to go with the Cox Plate, Caulfield Cup and Golden Slipper to add to his illustrious career. "It was a privilege to ride him today. We had a difficult barrier draw, but we trusted him. We knew what we can do. Great to be associated with a horse like this."

Master of Reality, ridden by Frankie Dettori, crossed the line second in a photo finish ahead of British raider Prince of Arran and American stallion Il Paradiso. But a stewards' protest over interference by Dettori in the final 100 meters was upheld with Prince of Arran elevated to second, Il Paradiso to third and Master of Reality relegated to fourth. O'Brien, who gave Vow and Declare a light spring campaign of just two runs before Tuesday, paid tribute to Williams. "An amazingly special thing to happen," he said. "I feel incredibly blessed to have a horse good enough to be in it and then for him to be ridden so beautifully by Craig. "He rolled the dice like he does. He's an outstanding jockey."

First staged in 1861, the Melbourne Cup has been run on the first Tuesday of November since 1876, and the winning horse instantly becomes a household name in Australia. It is a cultural institution and tens of thousands of well-dressed punters flock to Flemington, with boozy parties held nationwide. The race was run this year with the industry under extreme scrutiny following damning revelations about the fate of retired racehorses. While slaughtering horses instead of rehoming is not illegal in Australia, an undercover probe by the Australian Broadcasting Corporation alleged the practice was far more widespread than acknowledged. It detailed healthy horses being brutalized at one abattoir before being killed on an "industrial scale," with their meat shipped overseas for human and pet consumption. It sent shockwaves through the industry, which pledged to do better. But racegoers seemed largely undeterred as 81,408 packed into heaving grandstands, slightly down on last year's attendance of 83,471, with bookies predicting more than 3 million Australians would place bets. The Melbourne Cup was not directly linked to those slaughterhouses though the race had already been a target of animal rights activists because of the deaths of six horses at the race since 2013. There were no fatalities on Tuesday, but Irish 5-year-old Rostropovich pulled up lame with a fractured pelvis after finishing last. Racing Victoria said in a statement that she was "comfortable and receiving the best veterinary care." It is not just in Australia that horse racing is feeling the heat. A thoroughbred was euthanized after being injured in the U.S. during the high-profile Breeder's Cup Classic at Santa Anita over the weekend. Mongolian Groom was the 37th horse to die since December at the California track, a grim toll that has sparked outrage, an investigation by law enforcement authorities and dire warnings about racing's future from federal legislators.