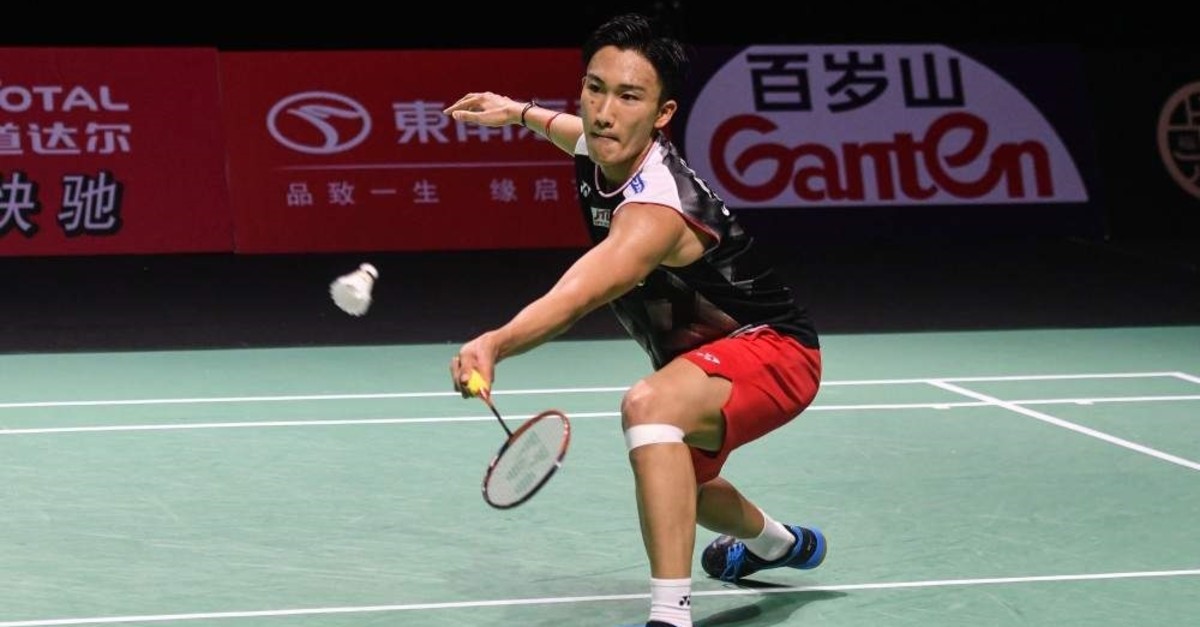 Kento Momota hits a return against Chou Tien-chen of Taiwan during their men's singles final match, Fujian, Nov. 10, 2019. (AFP Photo)
by Nov 10, 2019 5:38 pm
Kento Momota won his 10th title of a remarkable year as Japan's world number one defeated Chou Tien-chen to retain his Fuzhou China Open badminton crown on Sunday. Home hope Chen Yufei similarly successfully defended the women's title with a gritty victory over Japan's Nozomi Okuhara. Reigning two-time world champion Momota battled past Taiwan's world number two Chou 21-15, 17-21, 21-18 in a repeat of last year's final. Chou saved one match point, but handed Momota the title by hitting into the net. The Japanese player fell onto his back and screamed in celebration, his fists clenched.
Momota lost the final of the Indonesian Masters in January to Denmark's Anders Antonsen and said that defeat sparked his incredible run of titles. "I was in form in Indonesia and I was very disappointed when I lost," said the 25-year-old, whose haul in 2019 includes another world crown and the prestigious All England Open. "I used that as motivation to work harder. I didn't want to lose another final so I've put in a lot of effort."
The women's final was a similarly grueling affair and likewise went to three games. China's Chen lost the first game 21-9 to Okuhara but recovered to lift the Fuzhou title for the second year in a row by winning the next two 21-12, 21-18. It was more disappointment for Okuhara, who has now lost all six finals she has contested this year. "I tried my best, but it wasn't enough," she said. "It's very painful to accept. I'm very disappointed that I lost another final." In contrast, this was Chen's fifth tournament triumph this year. "I feel honored and proud of myself," she said.
Last Update: Dec 20, 2019 1:34 am
RELATED TOPICS