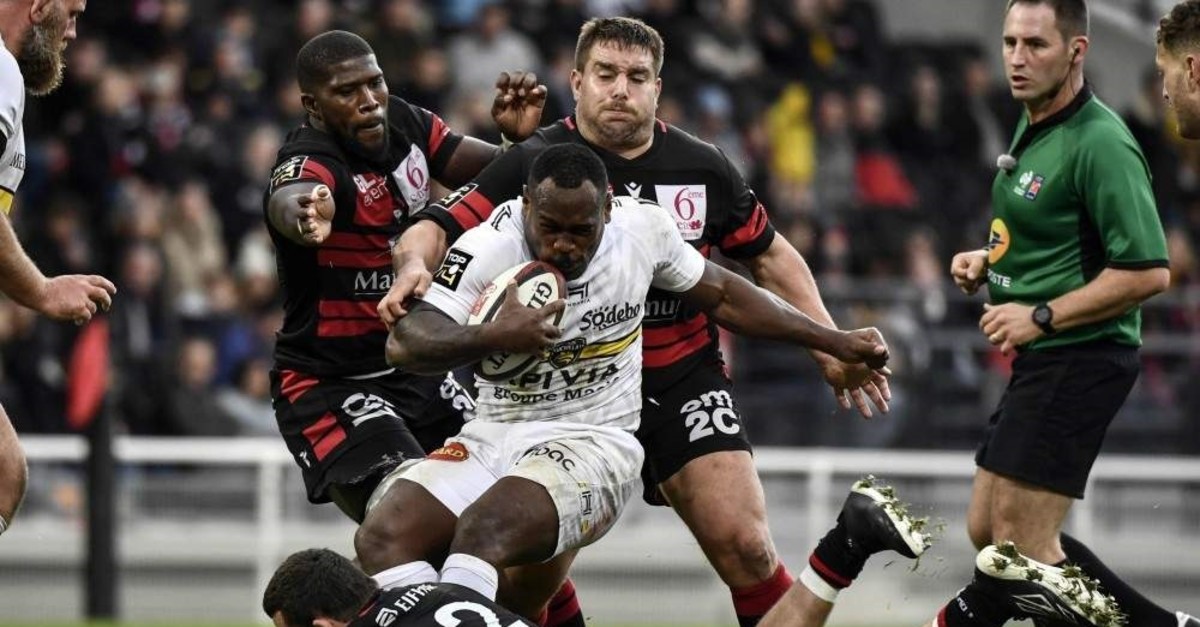 La Rochelle's Levani Botia (C) vies with Lyon's French prop Raphael Chaume (C behind), Lyon, Nov. 10, 2019. (AFP Photo)
by Nov 10, 2019 6:05 pm
Fiji winger Josua Tuisova impressed on his first Lyon appearance since the Rugby World Cup as the French Top 14 leaders hammered La Rochelle 45-17 on Sunday.
Tuisova, 25, who scored twice as the Pacific Islanders were knocked out of the competition at the pool stages in Japan, played a part in three of his new side's five tries against last season's fellow semi-finalists.
Lyon's Pierre Mignoni handed club debuts to Tuisova and France's Demba Bamba who missed the opening eight rounds of the campaign due to their international commitments.
His La Rochelle counterpart Jono Gibbes started four players who participated at the World Cup including Tuisova's compatriot Levani Botia.
The visitors, who are yet to win away from Stade Marcel-Deflandre this season, crossed for the first try of the game through France prop Dany Priso after six minutes.
Dylan Cretin scored for the home side before fly-halves Ihaia West and Jonathan Wisnewski traded penalty goals and Lyon led 11-10 after 23 minutes.
Mignoni's outfit took control of the fixture with Baptiste Couilloud's first of two tries after a powerful run by Tuisova and further Wisnewski efforts at the posts for a 24-10 advantage at the break.
Tuisova, who joined Lyon after six campaigns with Toulon, then set-up Couilloud for the scrum-half's double. Wisnewski converted the extras and the top of the table side led 31-10 after 44 minutes.
La Rochelle's only second half response came as Geoffrey Doumayrou scored two minutes later.
With less than half an hour to play it looked as if Tusivoa would finally get on the scoreboard after he ran in from a Cretin off-load but the Fiji winger selflessly chose to pass to Ngatai in the in-goal area for Lyon's fourth try of proceedings.
Former France international Mathieu Bastareaud was replaced with 23 minutes to go in his final Lyon appearances before he joins New York's Rugby United.
Lyon clinched the bonus point with six minutes to go as loose forward Loann Goujon smashed through Jeremy Sinzelle for his first try of the campaign.
Later on Sunday Stade Francais and Racing 92 meet in the Parisian derby with both clubs in the relegation zone.
On Saturday champions Toulouse hammered Clermont 34-8 in a re-run of June's final.
Last Update: Dec 20, 2019 1:34 am
RELATED TOPICS