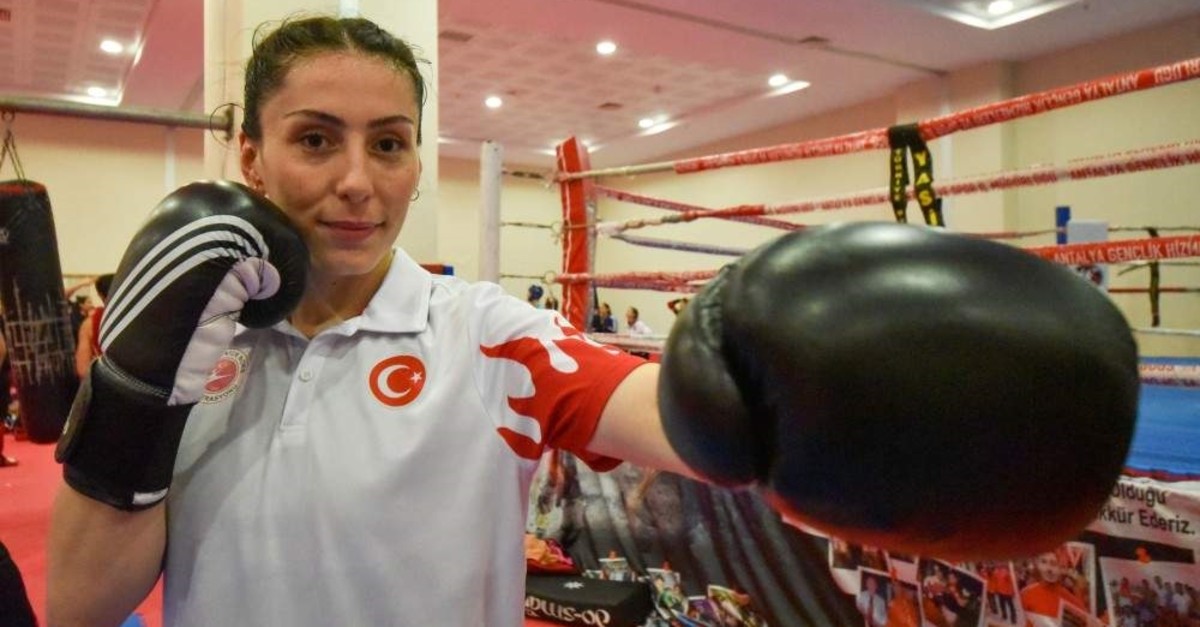 Dilara Kele? won 15 Turkish top titles in only three years in kickboxing. (DHA Photo)
by Daily Sabah with DHA Nov 24, 2019 5:12 pm
When kickboxers from around the world descend on Antalya this week, they will be joined by fellow competitor Dilara Keleş, a 25-year-old noncommissioned officer from the Turkish army’s growing team of kickboxers. The young woman launched her professional kickboxing career only three years ago, but has since managed to garner 15 Turkish titles, a bronze in the European Cup, and most recently, silver in the World Championship, held in Sarajevo this October. Keleş, one of a team of gendarmerie kickboxers, now has her sights firmly set on gold. Speaking of her hopes for the next tournament, to be held on November 26 in Antalya, on the Mediterranean coast, she stated: “I want a medal for the Gendarmerie. I want to be the champion this time.”
Metin Yürük, a 26-year-old lieutenant, will also compete in the tournament. A 10-time Turkey champion and bronze medal winner in European competition, Yürük joined the Gendarmerie Team three years ago. “I’ll be proud if I can wave our flag here as a world champion,” he says. Tanju Karadağ, meanwhile, a specialist sergeant who decided to take up kickboxing on the advice of his superiors, is a six-time Turkey champion and won gold in the European Cup held in Antalya last January. “I have trained very hard for this competition and hope to be world champion this time,” he says.
The tournament that will end on December 1, and sees kickboxers competing in full contact, point fighting, kick light and musical forms. A total of 49 athletes from Turkey compete in the tournament where about 1,000 players from 70 countries will take part.
Kickboxing has been on the rise in Turkey in recent years. This year, Turkish kickboxers collected a total of 926 medals in international competitions, “the highest such number,” according to Salim Kayıcı, chairman of the Turkish Kickboxing Federation.
Last Update: Dec 20, 2019 1:53 am
RELATED TOPICS