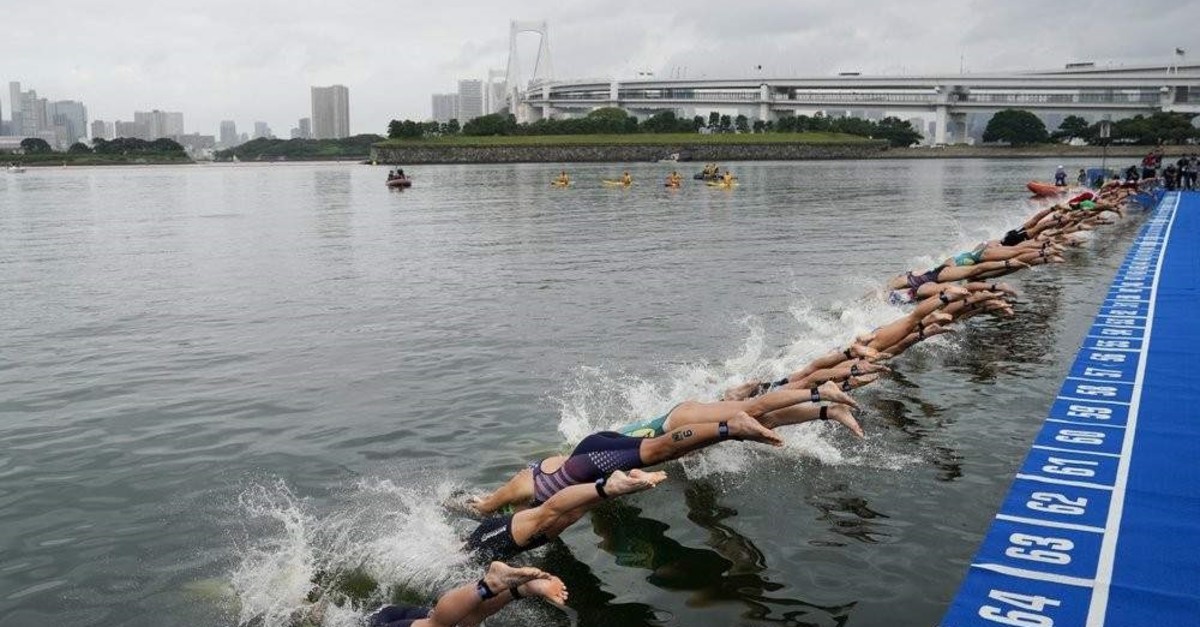 Athletes dive into the water during a triathlon test event at Odaiba Marine Park, a venue for marathon swimming and triathlon at the Tokyo 2020 Olympics, in Tokyo, Aug. 15, 2019. (AP Photo)
by Associated Press Dec 04, 2019 1:41 pm

The IOC moved next year’s Tokyo Olympic marathons and race walks out of the Japanese capital to avoid the stifling heat and humidity. Now some swimmers and an 11,000-member coaching body are asking that something similar should be done with the distance-swimming venue in Tokyo Bay.

Known as the “Odaiba Marine Park,” the water temperatures there were near danger levels in test events this summer for open-water swimming and triathlon. E. coli levels also plague the urban venue, and athletes have complained about the odors coming from the small inlet.

“Here’s the reality,” Catherine Kase, who coaches open water for the U.S. Olympic team, said in an email to the Associated Press. “If a marathoner faints or passes out, they may get a few bumps and bruises. If the same thing happens to an open-water swimmer, the result could be lethal.”

Tokyo’s heat again is the main problem. Water temperatures in the venue this summer were very warm, climbing one day to 30.5 degrees Celsius. That’s barely under the 31-degrees-Celsius limit set by swimming’s world governing body FINA.

FINA rules specify that the race will be shortened or canceled if temperatures go over the limit.

“For all open-water swims alternative plans should be made in case environmental factors make the swim unsafe forcing it to be canceled or curtailed, Kase added. “We would like to push for a viable back-up plan. The straightforward answer is that we are not comfortable with the Odaiba venue.”

The venue also has water quality issues including E. coli bacteria and problems with water transparency. Tokyo organizers say bacteria levels fall within “agreed limits,” on most days, though rainfall exacerbates the problem.

John Leonard, the executive director of the American Swimming Coaches Association, was even more emphatic about a move and placed much of the blame on FINA.

“We support a change in venue,” he said in an email to AP. “The ASCA position is always to err on the side of safety for the athletes. FINA talks about safety and then does the opposite and puts athletes in harm’s way.” FINA and local organizers say there is no “B Plan.”

The International Olympic Committee promised last month there would be no more venue changes. It made this pledge after angering Tokyo Governor Yuriko Koike, who strongly opposed moving the marathons out of Tokyo to the northern city of Sapporo.

The IOC said the decision was made, primarily to consider athletes who must run in the heat. But Koike’s allies characterized it as “an IOC-first decision, not an athletes-first decision.”

Cornel Marculescu, the executive director of FINA, spoke cautiously in an interview with AP.

Asked about the water temperatures at the venue, Marculescu replied: “I don’t want to comment,” he said, and suggested that elaborating could cause “problems.”

“This is what it is,” he added. “We check the quality of the water, we check the temperature all the time.”

In Tokyo, to counter E. coli levels, organizers have installed underwater screens that work as a filter. E. coli was within agreed limits on all but one day in test events this summer. But the screens also appeared to drive up water temperatures, and organizers plan to install triple screens for the Olympics.

In a statement, Tokyo spokesman Masa Takaya said: “we will consider operating methods that can help suppress water temperatures, such as allowing the underwater screens to float, and opening them when the weather is good.”