First international gold fires up judoka with Down syndrome 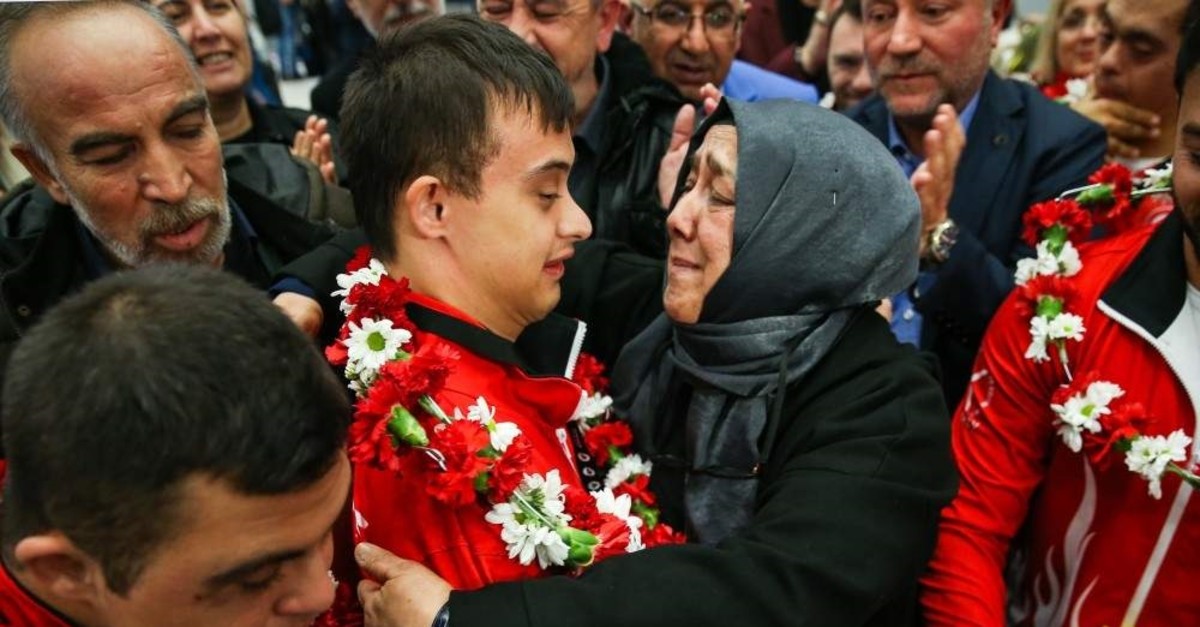 Semiha Erdem hugs her son Talha Ahmet Erdem at the airport as he returns from Portugal after winning gold, Dec. 2, 2019. (AA Photo)
by Hilal Taş Dec 08, 2019 9:36 pm
Talha Ahmet Erdem made it into Turkish sports history by bringing the country its first gold medal in a world judo championship for athletes with Down syndrome. The 24-year-old martial artist has now set his sights on future competitions and pledges he "won’t return home without taking to the podium, to have our national anthem played,” motivated by his historic win.
Erdem, Mehmet Can Topal and Doğukan Coşar were the only Turkish players in the tournament held in Portugal’s Guimaraes earlier this month. Erdem, who competed in 81 kilos in the T23 category, beat his Portuguese rival Corte Diogo 4-2 to win the first gold for Turkey while Topal won a silver in the T21 final.
Coşar became the second judoka to win gold for Turkey in the T21 category.
The martial artist who took to judo six years ago reached this stage both with his own hard work and the selfless efforts of his parents who were his most ardent supporters. Erdem, an employee of Down Cafe Belsa, a cafe run by people with Down syndrome in the northwestern city of Kocaeli, saw overwhelming support from friends and family. His mother Semiha says she has always been with her son wherever he goes and found work in his school to be with him.
Erdem is quite busy nowadays after his unprecedented title. A familiar face thanks to his gold medal, he is comfortable with newfound fame. “They call me champion now,” he says. “I am very proud. It was my first time abroad for judo. I always waited for this day and knew that I’d win a medal there,” he said.
“I made a promise to people I know and told them I’d be on the podium for winners, they would hear me recite our national anthem,” he proudly said, vowing there will be “more” medals.
His father Turhan is both proud and emotional. “I cried when I saw him holding Turkish flag on the podium. This was what he got for his labor,” he said.
Semiha Erdem says her son would get “weird looks” from other people for his condition but the family overcame this, particularly at school. “I spoke about his condition to every student in his school. I did not have any problem with parents but children can be cruel at times. They used to mess with him, unaware of if they would hurt him. I managed to win their hearts in the end,” she recounts. “I always tried to help him integrate, to mingle with other people. He did not attend special schools [for children with Down syndrome],” she says.
Last Update: Dec 20, 2019 2:14 am
RELATED TOPICS