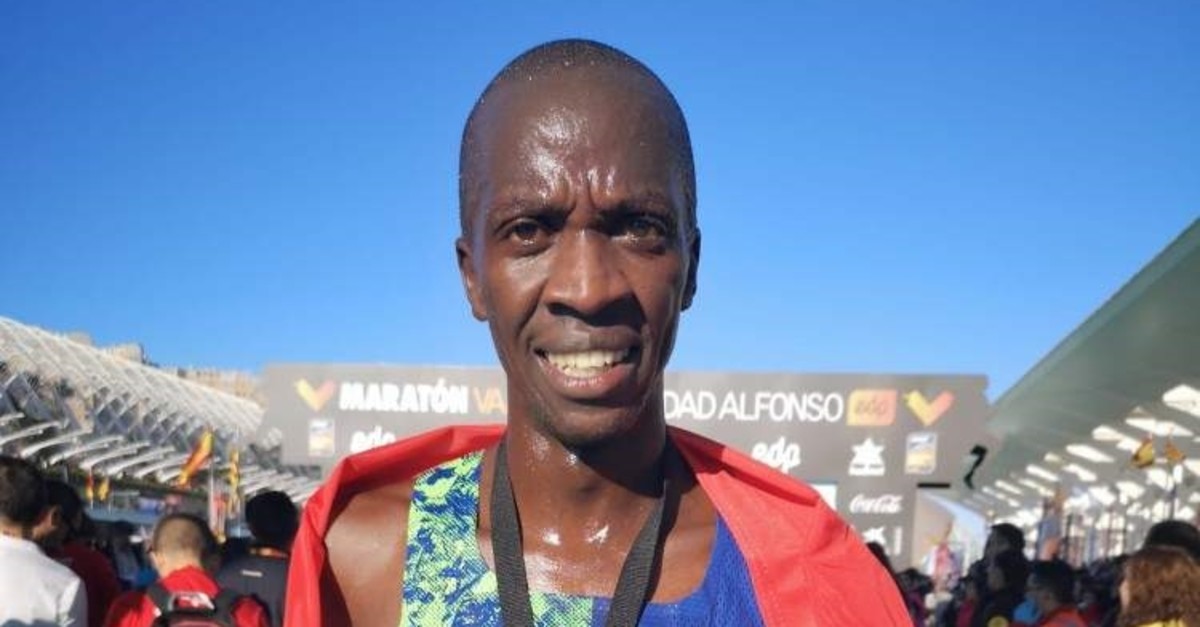 | AA Photo
by Anadolu Agency Dec 10, 2019 2:03 pm
European record-breaking Turkish athlete Kaan Kigen Özbilen aims to finish a marathon in under 2 hours, 4 minutes so he can have a chance to win a 2020 Summer Olympics medal in Tokyo.
Özbilen broke Mo Farah’s European record in the Valencia Marathon on Dec. 1, finishing at 2:04:16 mark, nearly a minute better than Farah's 2:05:11. He finished the race at second place, trailing only to Ethiopian debutant Kinde Atanew, who won in a course record of 2:03:51.
"My training partner is a world record-holder Eliud Kipchoge and all my training level was showing under 2:04. So, it was an expected result which had to come earlier. But before the world championship in June, l broke a toe and lost six weeks of training and possibly a world medal," Özbilen told Anadolu Agency on Monday. "I am very happy to be a part of European athletic history," Özbilen said. "My next goal and dream is the Tokyo Olympics medal."
The 33-year-old runner also added that he is planning to run until he is 40. Athletes have professional and family lives and 33 is a mature age, he said, adding that he is also planning to race in the 2024 Olympics.
Responding to a question on the secrets of his success, he noted, "The majority of this comes from genetics. It is about choosing the correct discipline, and my results show l chose marathon as the correct discipline for myself."
"What I see in Turkey is a problem in talent selection and very few clubs are supporting athletes at very low incomes. You can not expect a young athlete to grow for European record only with TL 2,000-3,000 monthly support," Özbilen stressed.
Noting that a 2:04:16 marathon result is not a one-day result, but it is a "10-year journey," he said, adding that it starts at a young age with successful middle distance results, such as 3:35-3:37 maximum for 1,500 meters (4,921 feet).
"After the athlete moves to 5,000 meters and 10,000 meters you must reach 13-13:10 at 5,000 meters and you must run around or under 28 minutes at 10,000 meters," he added.
The federation and clubs must give Turkish athletes long term sufficient and individual support to have successful results, he added. Indicating that breaking the world record would not be easy, he said: "Definitely, I will do my best and develop. I put my goals step by step and now my next step is to run under 2:04 and to get a medal in the Tokyo Olympics."
In response to a question on the reason for running for the Turkish flag as a Kenyan-origin athlete, "I love to run for [the] Turkish flag. Firstly to clarify, l did not get any money or any promise to be Turkish," he stressed. "My brother Önder was in Kenya and he was known as a big brother in my region for selecting young talents. It took me a year to convince him that l still have big targets. "We started to run after our dream. To be the best of Europe in front of Mo Farah's record was a dream that only we believed in and now we will go to our new dream of Olympic or World medal."
Özbilen also shared the best locations for him to train for marathons, saying, "In the summer, [Turkey's Black Sea province of] Bolu and [eastern Turkish province of] Erzurum are good locations, but in the winter season, all the world's best marathoners prepare in Kenya or Africa or even [in] Mexico in mild climates."
On having a healthy diet, he said, "I love Turkish food such as tas kebap and tantuni."
"l never have drinks like Coke and also l do not eat much fast food and junk food. Natural food is the best," he added.
Last Update: Dec 20, 2019 2:17 am
RELATED TOPICS