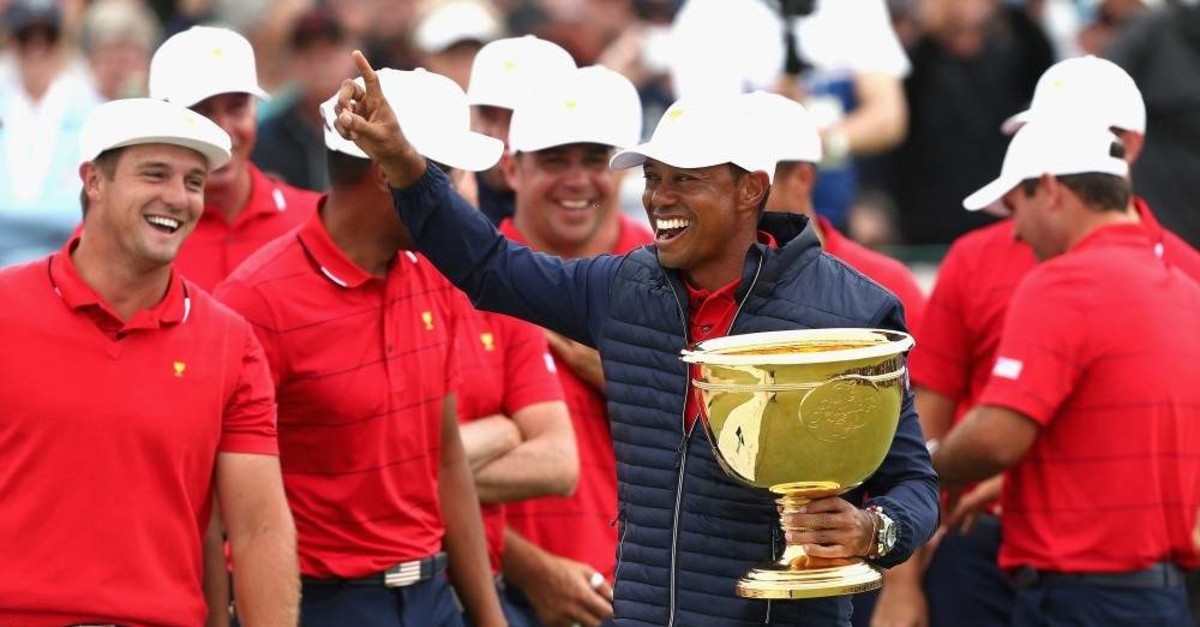 Woods capped off a big year that began with his 15th major at the Masters by leading the U.S. to a stunning turnaround to deny the Internationals a first Presidents Cup in 21 years

United States captain Tiger Woods led from the front as the Americans dominated the Sunday singles to overhaul the Internationals at Royal Melbourne 16-14 and claim an eighth successive Presidents Cup.
Woods clinched a record 27th win in the event with a 3 and 2 victory over Abraham Ancer to fire up his team and then beamed from the sidelines as they landed crushing early blows before sealing the Cup with a match to spare.
"We did it together. We came here as a team. My teammates and my boys all played well, the captains did an amazing job," a thrilled Woods said after the Americans sewed up their 11th win in the 13th Cup. "It's been one of the more amazing challenges but... all the guys, they believed in one another and relied on one another."
Matt Kuchar rolled in the winning putt from just over five feet on the 17th as he halved his match with Louis Oosthuizen.
Rickie Fowler halved the final match with Marc Leishman in front of a deflated gallery as the United States won eight of the 12 points on offer in a stinging Sunday reverse for the Internationals, who had led 10-8 overnight.
No team had won after trailing into the final day but the class and depth of the Americans prevailed when it mattered most. "We were right there to the end... Just a couple of matches didn't quite go our way," rued Internationals captain Ernie Els.
It has now been 21 years since the Internationals claimed their sole win, that victory coming at Royal Melbourne in 1998.
AMAZING GOLF
Woods's win over Ancer brought his record at the biennial event to 27 victories, 15 losses and one halved match in his ninth appearance as a player, eclipsing compatriot Phil Mickelson's 26-16-13 tally. At 43, the youngest captain in the event's 25-year history and only the second playing skipper, Woods finished with an unblemished 3-0-0 record for the week.
Dustin Johnson crushed Chinese debutant Li Haotong 4 and 3 before Patrick Reed, under pressure after losing all three of his previous matches, pushed his team in front with a 4 and 2 win over Taiwan's C.T. Pan.
Reed had his swing coach Kevin Kirk carrying his bag after his brother-in-law caddie was ejected from the event for clashing with a spectator on Saturday. The Texan charged out of the blocks with six birdies in the opening seven holes before Pan trimmed the American's six-hole lead to two by the 13th.
"The last couple of days were tough and today wasn't easy," said Reed, who was heckled throughout the event for a controversial penalty in the Bahamas last week. "I played some amazing golf but he put the pressure right back on me."
The Internationals' cause suffered a crushing blow when Hideki Matsuyama, having charged to a four-hole lead against Tony Finau, collapsed on the back nine and collected only a half-point.
South Korea's Im Sung-jae beat Gary Woodland 4 and 3 and Canadian Adam Hadwin delayed the U.S. procession by grabbing a half-point against Bryson DeChambeau. But Patrick Cantlay snatched back the lead with a 3 and 2 win over Chile's Joaquin Niemann.
Adam Scott, condemned to a ninth defeat in nine Cup appearances, lost 2 and 1 to Xander Shauffele before Webb Simpson beat South Korean An Byeong-hun by the same margin, slamming the door shut on the Internationals' hopes of victory.
The only suspense left was whether the Internationals could win the last three matches to grab a share of the Cup for the first time since 2003. Australian Cameron Smith held up his end of the bargain with a 2 and 1 win over Justin Thomas but Oosthuizen squandered a two-hole lead to allow Kuchar to extend the Americans' reign.