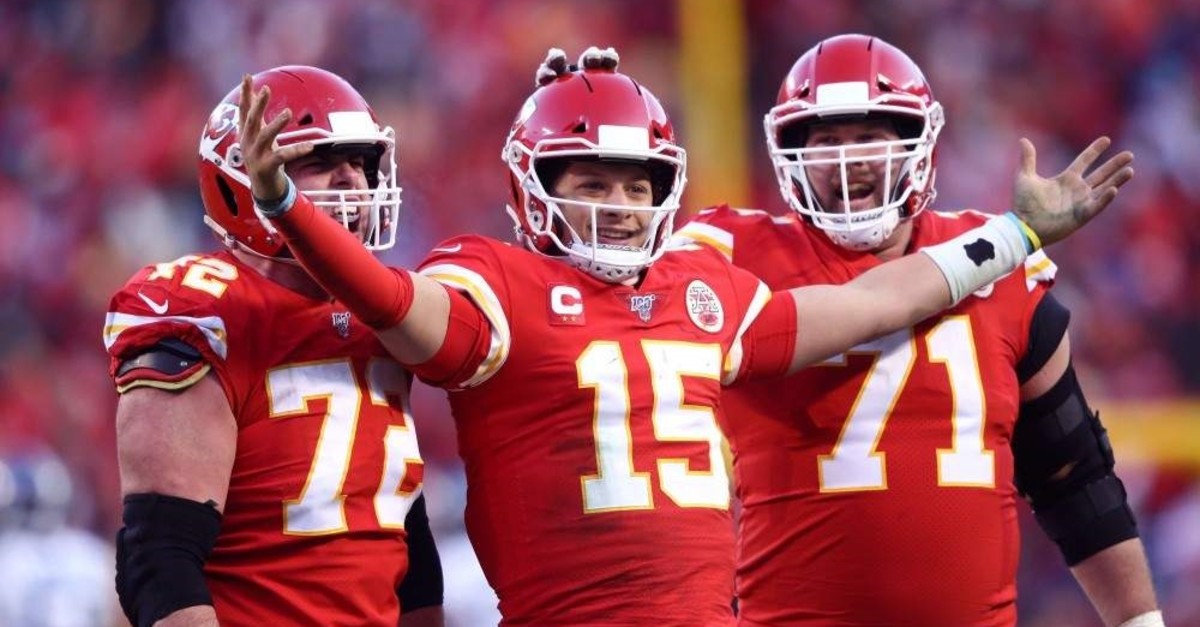 The San Francisco 49ers will meet the Kansas City Chiefs in next month's Super Bowl after they won their conference championships on Sunday.

Patrick Mahomes helped the Chiefs overturn a 10-point deficit to complete a convincing 35-24 win over the Tennessee Titans to take the American Football Conference Championship at Arrowhead Stadium.

The reigning NFL MVP threw for three touchdowns and danced into the end zone for a superb individual score as the Chiefs successfully neutralized the threat posed by Titans running back Derrick Henry.

It is the first time the Chiefs have advanced to the Super Bowl since their victory over the Minnesota Vikings in 1970.

"I'm lucky to be a part of this team with all these guys – it makes my job a lot easier," said Mahomes, who finished with 294 passing yards and 23 completions.

The win came one year after the Chiefs suffered an agonizing home overtime loss to the New England Patriots at the same stage of the playoffs.

"It's amazing, to be here to do it at Arrowhead, these people deserve it. We're not done yet," Mahomes added. "We're going to get it."

Mahomes said the Chiefs – who had fought back from 24-0 down to rout the Houston Texans in the divisional round last week – had kept their cool after falling behind early on against the Titans.

"We just stayed with the process. It was like last week, we just stuck with the game plan and knew it was going to work out," he said.

The Titans had reached the brink of the Super Bowl after a giant-killing playoff run which included wins over the New England Patriots and the top-seeded Baltimore Ravens.

But despite starting strong, the Titans ran out of ideas once the Chiefs defense contained powerhouse rusher Henry, who helped Tennessee forge early leads of 10-0 and 17-7 before the Chiefs rallied.

Henry had few complaints after being restricted to a relatively paltry 69 yards and one touchdown after 19 carries.

"They just had a great game plan, man," Henry said after the defeat.

"They were coming off the ball, those guys were being physical. They played a great game today on defense and you know their offense, we know the type of offense that is explosive, can score at any moment," he said.

"We just came up short. All the credit to them and good luck to them," Henry added.

In Santa Clara, meanwhile, the 49ers clinched the National Football Conference Championship with a 37-20 rout of the Green Bay Packers that was more one-sided than the score line suggested.

Niners running back Raheem Mostert rushed for four touchdowns and a whopping 220 yards as the run-oriented San Francisco offense punched hole after hole through a porous Packers defense.

The game was effectively over by half-time with Mostert crossing for three of his four touchdowns – a record in an NFC championship game – in the opening two quarters as San Francisco opened up a 27-0 lead by halftime.

"I just woke up like it was any other game," Mostert said of his stellar display. "It was just one of those games where once we all got in the groove we were like 'Hey, let's keep it riding, keep it rolling' and that's what we did."

But it was another disappointing outing for Packers quarterback Aaron Rodgers, who once again fell short in his pursuit of a second career Super Bowl title.

Rodgers, regarded by many as one of the greatest quarterbacks in NFL history, finished with 326 passing yards from 31-of-39 attempts but also had two interceptions and was sacked three times.

Rodgers later acknowledged that Sunday's defeat had stung as he faces up to the realization that at 36, he may have only a limited number of opportunities to reach the Super Bowl again.

"It's a little raw right now for sure," the Packers quarterback said. "It definitely hurts than earlier in your career just because you realize how difficult it is to get to this spot.

"With all the changes this off season, to get to this point, with a new coach and a new offensive system, you felt like it was something special. It felt like it was meant to be almost. So it's kind of disappointing. I don't have the same number of years ahead of me as I do behind me. So yeah, it's disappointing," he said.