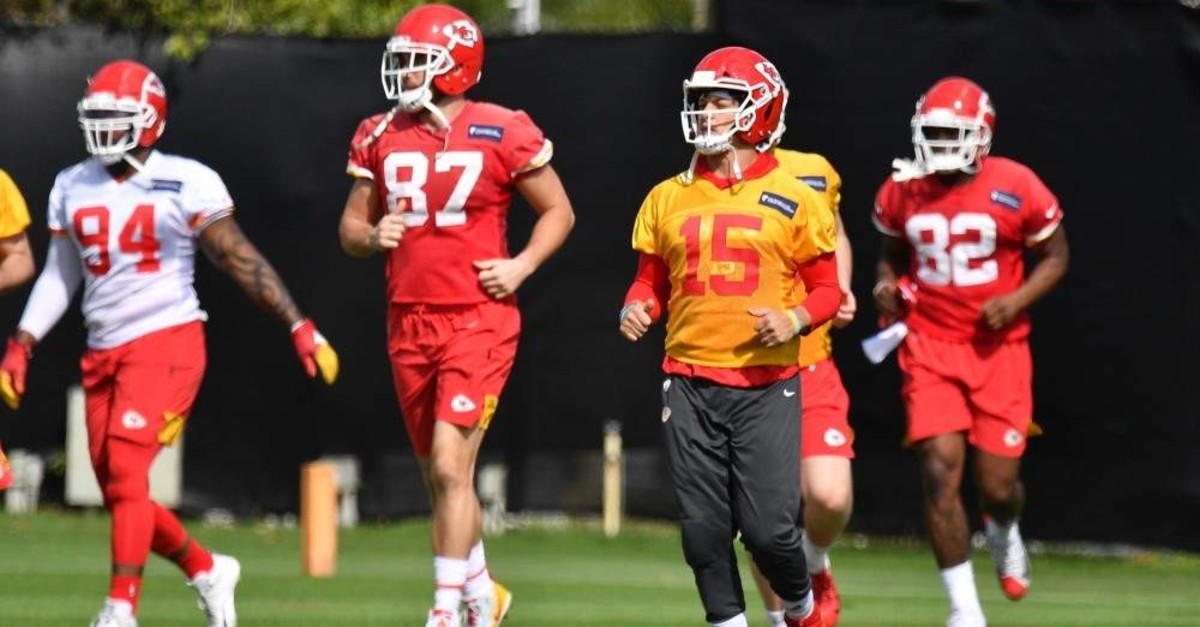 The Kansas City Chiefs, who secured their only championship title in Super Bowl IV, could set a new mark for the longest span between Super Bowl victories as they take on San Francisco 49ers in Miami Sunday.

All-world quarterback Patrick Mahomes, 24, would become the second-youngest signal-caller to win it all – the first being Ben Roethlisberger in Super Bowl XL, who was 23 years old at that time. Likewise, Andy Reid would cast off the title of the most wins of a NFL head coach without a Super Bowl victory. He is sixth in league history with 221 total regular-season and playoff victories, and the five coaches in front of him have combined for 23 Super Bowl or NFL championships. "Just getting him here isn't the goal," Chiefs tight end Travis Kelce said of his coach. "Winning this thing for him is." "He's had an amazing career," Mahomes added. "Obviously, we want to win this game, the big Super Bowl, put that on his resume. He's someone who's been successful from Day 1, and he's still successful now." Reid said this week he's "very humbled" by the support from friends across the league as he leads his second team to the Super Bowl. His Philadelphia Eagles lost Super Bowl XXXIX in 2005. But those sentiments won't exist on the opposing sideline, where the 49ers hope to make a history of their own.

San Francisco is seeking its first Super Bowl win in 25 years, dating to Super Bowl XXIX in 1995 that also was played in Miami. Another win would tie the Niners with the New England Patriots and Pittsburgh Steelers for the most Lombardi Trophies, six, in NFL history, and also secure the first-ever father-son combo to win Super Bowls as head coaches. San Francisco coach Kyle Shanahan's dad, Mike Shanahan, won back-to-back titles with the Denver Broncos in 1998 and 1999. Kyle Shanahan, who was a ball boy for the 49ers in the team's latest Super Bowl win, has been thrilled with his group's preparation in the two weeks since an NFC Championship Game victory over the Green Bay Packers. "I wish the players could have two weeks every week to do a game plan," he said. "I mean, for them to come out on a Wednesday ... and to be firing on all cylinders, it's not usually like that." The 49ers roll into the Super Bowl with a dominant run game, having rushed for 471 yards while throwing just 27 times in two playoff victories. That has prompted questions about whether quarterback Jimmy Garoppolo can handle a bigger load if needed on Sunday, but his coach has plenty of faith. "Jimmy should never apologize for us running the ball too well," Shanahan said. "You can't run the ball if you don't do good on third down, and Jimmy's been as good as anyone, to me, on third down this year." Garoppolo, who led all passers this season by earning a first down on exactly half (65 of 130) of his third-down pass attempts, enters with a record of 23-5 (.821) as a starter in the regular season and playoffs combined.

Combined with Mahomes' 27-8 (.771) record, the pair has the highest combined win percentage (.794) of opposing starters, with a minimum of 25 starts each, in Super Bowl history.

Mahomes comes in red-hot, having thrown for 615 yards, eight touchdowns and no interceptions in two playoff games while adding 15 carries for 106 yards and a touchdown on the ground. He'll have to survive 49ers pass rush – led by rookie defensive end Nick Bosa – that had 48 sacks in the regular season and has nine more in the playoffs. "He's a monster," Mahomes said of Bosa, who said he'll lean on the advice from his brother, Joey Bosa, who has played Mahomes twice a year with the Los Angeles Chargers. Both teams are near full health. All Chiefs players have practiced in full this week, with defensive tackle Chris Jones expected to take closer to a full workload after being limited in the AFC Championship Game. For the 49ers, running back Tevin Coleman, linebacker Kwon Alexander and safety Jaquiski Tartt have been limited but are expected to play.