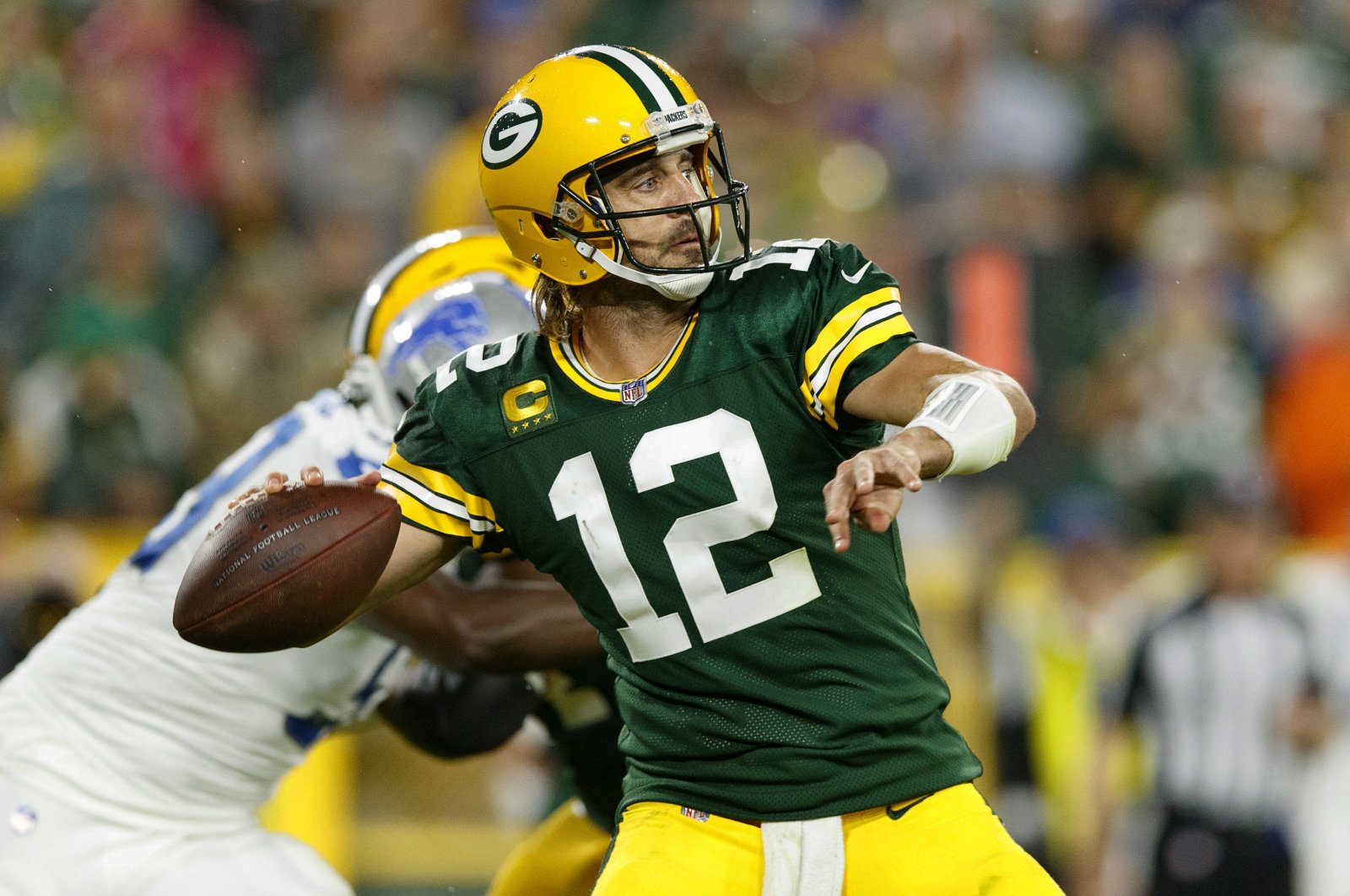 Down by three at the end of the first half, Green Bay might have been wondering if they were going to start their season 0-2; but then they remembered they were playing the Detroit Lions, whom they hadn't lost to in four games over the previous two seasons and over whom at the time they enjoyed a 104-72-7 all-time series lead. Make that 105 wins for the Packers now, thanks in part to their Aarons leading the way.

Aaron Jones caught three of Aaron Rodgers’ four touchdown passes and rushed for a fourth score, and the Packers had a welcome return to normal after an embarrassing opening-week loss, beating the Lions 35-17 on Monday night.

Green Bay (1-1) won its ninth straight home opener. The Packers, who got thumped 38-3 by the New Orleans Saints in Week 1, looked more like the team that went 13-3 in each of coach Matt LaFleur's first two seasons.

Rodgers went 22 of 27 for 255 yards and surpassed John Elway for 10th all-time in passing yards with 51,633. Rodgers has followed up each of the Packers’ last five regular-season losses by throwing four touchdown passes and no interceptions in his next game.

Jones became the first Packers running back to catch three touchdown passes in a game since Andy Uram against the Chicago Cardinals in 1942. He had 17 carries for 67 yards and six catches for 48 yards.

Detroit’s Jared Goff completed 13 of his first 14 passes but struggled the rest of the way as the Lions (0-2) blew a 17-14 halftime lead. Goff finished 26 of 36 for 246 yards. He connected on touchdown passes to Quintez Cephus and T.J. Hockenson but also threw an interception and lost a fumble.

The Packers faced third-and-12 on their opening series of the second half when Rodgers threw a 50-yard completion to Davante Adams, who ended the night with eight catches for 121 yards.

Green Bay dominated the rest of the way.

Rodgers capped that drive with a 22-yard touchdown pass to Robert Tonyan. Detroit’s next series ended when Goff threw an incompletion on fourth-and-1 from the Green Bay 25.

Rodgers threw an 11-yard touchdown pass to Jones to extend the Packers’ lead to 28-17.

Green Bay’s Krys Barnes recovered Goff's fumble at the Detroit 23 on the Lions’ next snap. Jones scored on a 1-yard run and that was that.

The Packers activated wide receiver Equanimeous St. Brown from the practice squad, giving him the chance to play against his younger brother. The Lions selected receiver Amon-Ra St. Brown out of Southern California in the fourth round of this year’s draft. Amon-Ra had the better stat line with three receptions for 18 yards, while Equanimeous had one catch for no gain.

Green Bay’s Lucas Patrick, who started at left guard against New Orleans, was active after getting out of concussion protocol. But he wasn’t on the field for the opening series.

Jon Runyan Jr. was at left guard instead in the 2020 sixth-round pick’s first career start. Runyan's father was an All-Pro tackle who went on to represent New Jersey in Congress from 2011-15.

Lions: Host Baltimore (1-1) on Sunday. The Ravens are coming off a Sunday night victory over the Kansas City Chiefs.

Packers: At San Francisco (2-0) on Sunday night. This will be the fourth time in the last three seasons the Packers have played at San Francisco. They won 34-17 last season. Two years ago, the Packers lost 37-8 to the 49ers in the regular season and 37-20 in the NFC championship game.