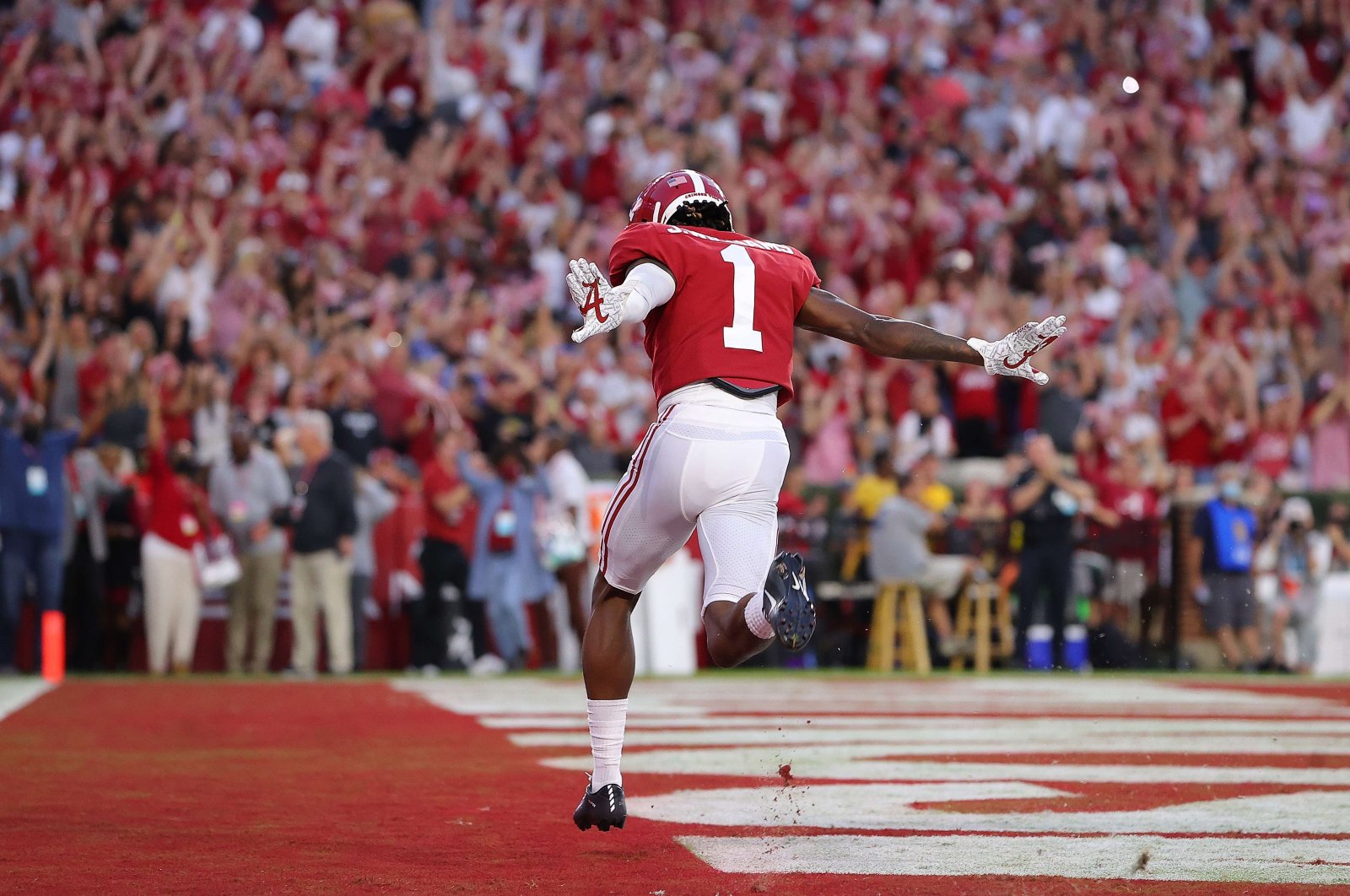 Jameson Williams (1) of the Alabama Crimson Tide reacts after returning the opening kickoff for a touchdown against the Southern Miss Golden Eagles during the first half at Bryant-Denny Stadium, Tuscaloosa, Alabama, U.S., Sept. 25, 2021. (AFP Photo)
by ASSOCIATED PRESS Sep 27, 2021 12:09 pm
RECOMMENDED

Any team with a 2-2 record after four weeks of play – looking at you, Clemson – has no business being in The Associated Press (AP) Top 25, especially when one of those losses came at the hands of a previously unranked team. If .500 teams are to be included in the AP Top 25, then the Wisconsin Badgers are fully deserving of that honor, as their two losses came at the hands of teams both ranked in the top 10.

A month into the season, 12 teams that were ranked in the preseason are unranked, including two preseason top 10s, and a total of 38 teams have spent at least one week in the AP Top 25.

The number of ranked teams to lose through four weeks increased to 25 when six more went down this past weekend.

The most surprising development? Clemson barely holding on in the Top 25.

A day after losing for the second time this season, the Tigers checked in at No. 25 in the AP Top 25 presented by Regions Bank, ending a streak of top 10 appearances at 97 weeks.

The voters cut Clemson some slack and maybe that's fair. The Tigers did stay within a score of No. 2 Georgia, which has otherwise stampeded its competition.

Reputation and preseason expectations help a lot, too.

The remnants of the preseason rankings can still be spotted. Oklahoma started at No. 2 and has slipped to No. 6 after beating three unranked FBS teams by a combined total of 15 points.

Of course, throwing out all preconceived notions after most teams have played three or four games – some of which were glorified scrimmages – doesn't make sound logic, either.

There's still not enough information available to make definitive judgments based solely on results. Iowa, for example, has gone from No. 18 in the preseason to No. 5 based on beating two ranked teams (Indiana and Iowa State) that are no longer ranked and have combined for four losses and no Power Five victories in September.

Reality Check leans more toward rewarding accomplishments and making the struggling teams, even ones with a recent history of success as good as Clemson's, win their way back in.

Reality check: Ohio State transfer Jameson Williams has given the Tide the deep threat it needed, averaging 25 yards per catch.

Reality check: Bulldogs defense by national rankings: First in scoring; first in passer efficiency; first in yards per play; fifth in yards per rush; sixth in interceptions; 11th in sacks.

Next: at Stanford, Saturday.

Ranked: Too high but somebody needs to be No. 3.

Next: vs. Indiana, Saturday.

Reality check: Sean Clifford, 72% passer. If he can keep up anything close to this, Penn State can keep this lofty ranking.

Next: at Maryland, Friday.

Reality check: Hawkeyes had plodded their way to perfection, but are about to face two straight opponents with firepower in Maryland and Penn State.

Ranked: A little too high.

Next: at Kansas State, Saturday.

Reality check: Who are you and what have you done with Oklahoma's offense? The Sooners have been held under 24 points in consecutive home games for the first time since 1998.

Reality check: With a couple of NFL prospects at cornerback in Sauce Gardner and Coby Bryant, the Bearcats are allowing opposing quarterbacks to complete just 44.3%, the lowest in the nation.

Reality check: WR Treylon Burks has 19 catches for 373 yards. That's 39% of the Razorbacks' receptions and 43% of their yards receiving. Go-to guy.

Next: vs. No. 7 Cincinnati, Saturday.

Ranked: Credit the Irish for coming up with ways to win, but too high.

Next: at Kentucky, Saturday.

Reality check: Gators will get a lot of mileage out of playing Alabama close.

Next: at Rutgers, Saturday.

Reality check: Drama tends to follow the Buckeyes, even when things are going well. It also tends to cloud perceptions. This is still the favorite to win the Big Ten – just not as big a favorite as they have been in recent seasons.

Reality check: Rebels defense has shaved almost 2 yards off its yards per play allowed from last year. Let's see how improved it is against 'Bama.

Next: at Utah State, Friday.

Reality check: Cougars stayed unbeaten without injured QB Jaren Hall (ribs). Baylor Romney was fine at home against USF, but a trip to Logan could be tougher.

Ranked: About right. The back half of the rankings are pretty tightly packed.

Next: at Wisconsin, Saturday.

Reality check: What happens when the Wolverines can't just run all over an opponent? Michigan managed two first downs in the second half against Rutgers.

Next: vs. Mississippi State, Saturday.

Reality check: Aggies seemingly have enough talent around their backup quarterback to piece together a functional offense. It hasn't happened yet.

Next: vs. Louisiana-Monroe, Saturday.

Next: vs. Western Kentucky, Saturday.

Reality check: RB Kenneth Walker III was bottled up by Nebraska and the Spartans' offense dried up. Interesting to see how they adjust going forward.

Next: at Hawaii, Saturday.

Reality check: Not surprising the Bulldogs would be less-than-sharp on a short week after a big upset of UCLA. QB Jake Haener and Co. avoided the upset to UNLV.

Reality check: Cowboys are last in the Big 12 in yards per play at 5.21. College football in the Sooner state hasn't been this defensive in years.

Next: vs. Arizona State, Saturday.

Reality check: QB Dorian Thompson-Robinson is not very accurate (57.3%), but he hits big plays and has thrown only one interception.

Next: at No. 19 Oklahoma State, Saturday.

Reality check: Pop quiz: What team leads the country in runs of 10 yards or more? That's right, it is the Bears with 43. Last season in nine games, they had 32.

Next: at LSU, Saturday.

Reality check: Is the Bo Nix era over at Auburn? LSU transfer T.J. Finley is going to get his shot. Some better play from the receivers would help whichever quarterback is out there.

Next: vs. Louisiana Tech, Saturday.

Reality check: The Wolfpack's defense has remained stingy without star linebacker Payton Wilson (left arm), who was lost for the season after Game 2.

Next: vs. Louisville, Saturday.

Reality check: The Deacs formula for success: minimize penalties (4.8 per game) and turnovers (1.0 per game), run a lot of plays (79 per game). Dave Clawson is an undervalued coach.

Next: at Boston College, Saturday.

Reality check: Tigers also lost two key players against N.C. State. Star DT Bryan Bresee (knee) is out for the season, and freshman RB Will Shipley (knee) will miss about a month.

Instead of Clemson and North Carolina State, how about Maryland or San Diego State or UTSA?