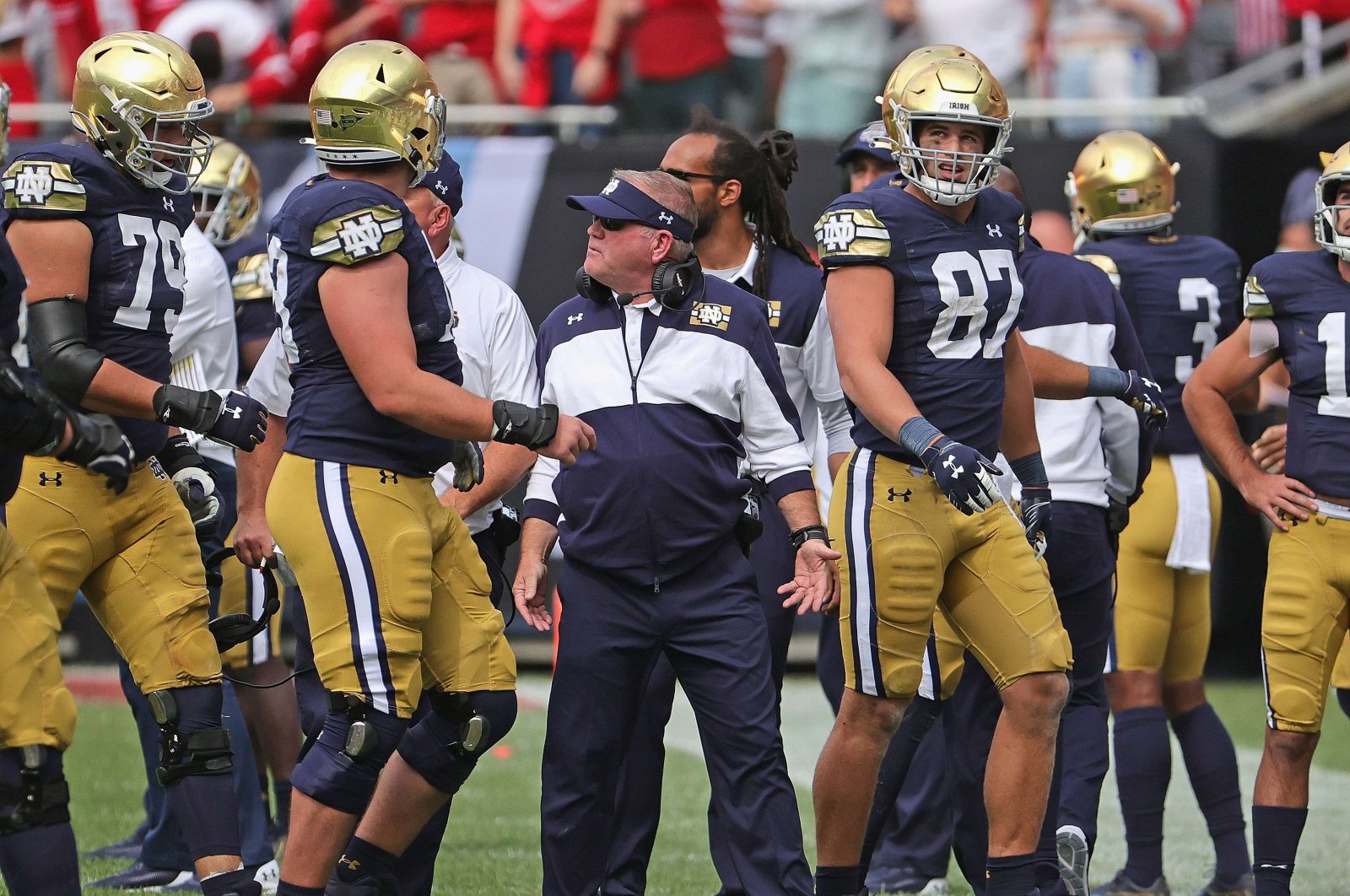 For the first three quarters and less than a minute into the fourth, the Wisconsin Badgers were doing just enough to seemingly eke out a must-win versus Notre Dame, one of the most storied programs in college football. Then the wheels came off.

Chris Tyree returned a kickoff 96 yards for a touchdown and Drew Pyne threw a fourth quarter touchdown pass in relief of an injured Jack Coan, helping No. 12 Notre Dame pull away from No. 18 Wisconsin 41-13 on Saturday at Soldier Field.

The Fighting Irish (4-0) have shown plenty of vulnerabilities as they retooled a team that went to the College Football Playoff last season. But they keep winning.

“We got a long way to go still, but they're getting better each week," Notre Dame coach Brian Kelly said. “I'm having fun coaching them. They're not perfect by any means, but they're going to be better in November.”

With two early-season losses, albeit both to teams that should be ranked in the top 10 when the new polls are released late Sunday, the Badgers now find themselves in the all too familiar role of at best playing spoiler in the Big Ten, with next week's game against No. 19 Michigan and the Oct. 30 matchup versus No. 5 Iowa the only remaining games on the schedule against currently ranked teams. If the Badgers remain undefeated for the rest of the season they will play in the Big Ten Championship game, where even with a victory their two losses may still see them – and possibly any Big Ten team – shut out from the College Football Playoff.

For about 45 minutes late Saturday afternoon, college football was on overload.

North Carolina State went from agony to ecstasy against No. 9 Clemson. Baylor stopped a 2-point conversion to upset No. 14 Iowa State. No. 16 Arkansas finished off No. 7 Texas A&M to claim a Lone Star state title.

No. 19 Michigan held off Rutgers, UTSA remained unbeaten with a last-second field goal against Memphis, an LSU transfer rallied Auburn from behind against Georgia State and UConn ALMOST won.

It was a time for multiple screens and social media reactions, and a fun reminder that any random Saturday in the college football season can feel like the first couple of days of the NCAA basketball tournament.

There was just so much stuff going on.

The most significant development was in Raleigh, North Carolina, where N.C. State missed a potential game-winning field goal in the closing seconds, but still managed to beat Clemson in double overtime.

The six-time defending Atlantic Coast Conference champion Tigers have lost two games in September for the first time since 2014, the last time they failed to win the league and go to the College Football Playoff.

Clemson's offense is a mess. The Tigers have scored five offensive touchdowns in three games against FBS opponents, and needed overtime against the Wolfpack to get No. 5.

D.J. Uiagalelei has still not thrown for more than 200 yards in a game this season. The running game has been no better. Dabo Swinney was asked the last time Clemson was so disjointed offensively and he said maybe 2010.

That was back before Clemson had become the program that challenged Alabama for supremacy of college football. That was before two generational talents at quarterback – Deshaun Watson and Trevor Lawrence – led Swinney's teams to a couple of national titles and two more championship game appearances.

Uiagalelei was supposed to be next in line, but after he passed for more than 800 yards in two starts last season, filling in for Lawrence, the former five-star recruit from Southern California seems lost behind an offensive line that isn't giving him enough protection.

Clemson fans are turning on offensive coordinator Tony Elliott. What the heck is happening here?

“You know what? That comes with the territory because the expectation and the standard at Clemson and who we are, we’re not meeting it. It’s just that simple,” Swinney said.

More than a month before Halloween and Clemson's CFP streak is in grave danger.

ACC is a mess

North Carolina State's signature victory, its first against a top 10 opponent in nine years under Doeren, came two weeks after the Wolfpack took a beating at Mississippi State.

North Carolina got a lot of offseason hype, but is now 2-2 after getting walloped by Georgia Tech.

The only unbeaten teams left in the conference are Wake Forest and Boston College, two other members of an Atlantic Division that Clemson has run roughshod over in recent years.

There is a chance no ACC team will be ranked in the next AP Top 25.

Clemson has been ranked in the top 10 of The Associated Press (AP) poll for 97 consecutive weeks. That is tied with Alabama for the longest current top-10 streak and the second-longest such streak in the history of the poll behind Miami's 137 from 1985-1993.

Not only will that streak end Sunday when the new rankings are revealed, but the Tigers' streak of 106 straight weeks being ranked should probably come to an end, too.

When Arkansas hired Sam Pittman, the former offensive line coach who had never led a program of his own, it seemed as if the Razorbacks had settled.

Coming after the awful two-year tenure of Chad Morris, Arkansas was stuck at the bottom of the toughest division in college football in what seemed like a huge hole.

Even Arkansas native Eli Drinkwitz passed on the Razorbacks' head coaching job to go to Missouri. That opened the door for Pittman.

As for the Aggies, this was supposed to be the season that Jimbo Fisher's team closed the gap on Alabama. Instead, they have been passed by Arkansas and Pittman.

Don't worry, Aggies fans. After the latest contract extension, Fisher has nine more seasons to figure it out.

Oklahoma fans were chanting for backup quarterback Caleb Williams as Spencer Rattler and the offense slogged to a victory against West Virginia. Tough crowd. The No. 4 Sooners are still unbeaten and considering the way ranked teams have been dropping, that's got to count for something ... Alabama has won 100 consecutive games against unranked teams. The second-longest streak coming into Saturday was Clemson at 36 ... Even in a routine blowout for No. 10 Ohio State against Akron, some drama for the Buckeyes when linebacker K'Vaughan Pope stormed off the field after not being put in the game ... SMU knocked off TCU to win the Iron Skillet for a second straight meeting, running for 350 yards and starting a skirmish after the game when they tried to plant their flag at midfield in Forth Worth ... Drinkwitz said earlier this week he would rather play a regional rivalry than make a trip to Boston College. He was right. BC 41, Missouri 34 in overtime ... After replacing Bo Nix, quarterback T.J. Finley seems like a good bet to start next week for Auburn at LSU, his former team ... Bowling Green pulled off the biggest upset of the season, stunning Minnesota as a 30-point underdog. It was a baffling loss for the Gophers against a program that has been one of the worst in major college football over the last five seasons ... Baylor at 4-0 is the most surprising team in the Big 12 under second-year coach Dave Aranda, who went 2-7 in his debut ... Washington State coach Nick Rolovich is facing a deadline to comply with the state's COVID-19 vaccine mandate and doing so with a 1-3 record that includes no victories against FBS teams.