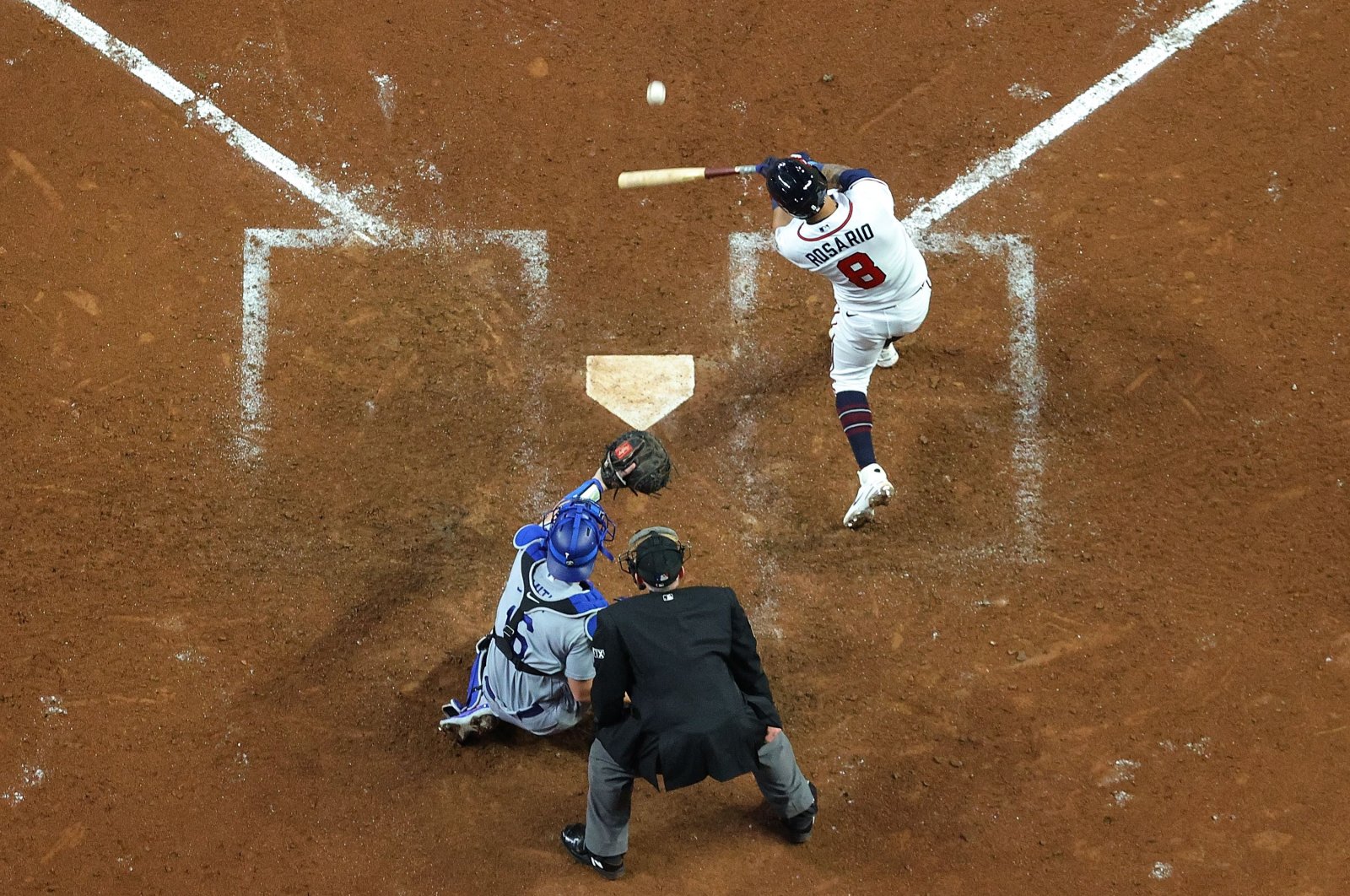 Eddie Rosario (8) of the Atlanta Braves flies out during the eighth inning of Game 6 of the National League Championship Series against the Los Angeles Dodgers at Truist Park, Atlanta, Georgia, U.S., Oct. 23, 2021. (AFP Photo)
by ASSOCIATED PRESS Oct 24, 2021 10:04 am
RECOMMENDED

For the first time this century the Braves will be heading back to the World Series, hoping to exorcise the demons of futility that have a knack for showing up when teams from Atlanta have a chance to win it all.

Eddie Rosario capped a remarkable NL Championship Series with a three-run homer, sending the Atlanta Braves to the biggest stage of all with a 4-2 victory over the defending champion Los Angeles Dodgers on Saturday night.

The Braves won the best-of-seven playoff four games to two, exorcising the demons of last year's NLCS – when Atlanta squandered 2-0 and 3-1 leads against the Dodgers – and advancing to face the AL champion Houston Astros.

Game 1 is Tuesday night at Minute Maid Park in Houston.

“It's a great moment in my life,” Rosario said through an interpreter. “But I want more. I want to win the World Series."

The Braves were Series regulars in the 1990s, winning it all in '95 with a team that included Hall of Famers Greg Maddux, Tom Glavine, John Smoltz and Chipper Jones.

That remains their only title in Atlanta. The Braves lost the Series four other times during that decade, a run of postseason disappointment that marred a momentous streak that grew to 14 straight division titles.

After getting swept in the 1999 World Series by the Yankees, the Braves couldn't even get that far in the postseason.

Twenty-two years of frustration, 12 playoff appearances that fell short of a pennant.

Rosario was acquired in a flurry of deals just before the July 30 trade deadline that rebuilt the Braves' depleted outfield, which lost Ronald Acuña Jr. to a season-ending knee injury and slugger Marcell Ozuna to a hand injury and legal troubles.

They weren't missed at all in the NLCS.

“Anything that was thrown at us,” Freeman said, “we were able to overcome it.”

Rosario set an Atlanta record and became only the fifth player in baseball history to get 14 hits in a postseason series. He was an easy choice as MVP of the series.

Spurred on by chants of “Eddie! Eddie! Eddie” from the raucous sellout crowd of more than 43,000, Rosario finished 14 of 25 (.560) against the Dodgers, with three homers and nine RBIs.

Will Smith worked a perfect ninth for his fourth save of the postseason after a brilliant relief stint by winner Tyler Matzek, who escaped a huge jam in the seventh by striking out the side.

Rosario's final hit was certainly the biggest of the 30-year-old Puerto Rican's career.

With the score tied at 1 in the bottom of the fourth, Rosario came up after pinch-hitter Ehire Adrianza extended the inning with a two-out double into the right-field corner. Slow-running catcher Travis d'Arnaud was held at third by coach Ron Washington, surely aware of who was up next.

Rosario got into an extended duel with Walker Buehler, who stepped up to start on three days' rest after ace Max Scherzer wasn't able to go because of a tired arm.

Finally, he got one he liked from the Dodgers' 16-game winner – a cutter that Rosario turned into a 105 mph rocket down the right-field line, higher and higher, straight as an arrow until it landed well back into the seats below the Chop House restaurant.

Rosario knew it was gone, dancing down the line after delivering a 361-foot finishing shot to a highly paid team that won 106 games during the regular season – 18 more than the NL East-winning Braves – but came up short in its bid to become baseball's first repeat champion since the 2000 New York Yankees won their third straight title.

“We had a tremendous season,” Roberts said. “We were two wins away from going to the World Series. I want the guys to be proud of that.”

The Braves will be looking to bury their city's reputation for postseason misery across a wide range of sports.

From four World Series losses in the 1990s to the NFL Falcons blowing a 28-3 lead in the 2017 Super Bowl, Atlanta again finds itself on the cusp of an extremely rare feat.

The ‘95 Braves remain the city's lone team in the four major sports – baseball, football, basketball and hockey – to capture a title. Freeman said after a Game 5 loss that the city's history would remain an issue “until we kill that narrative.”

They're four wins from doing just that.

Braves manager Brian Snitker will see a familiar face in the opposite dugout during the World Series.

Troy Snitker is the hitting coach for the Astros.

The Braves got a stellar performance from their bullpen – including 10 strikeouts – after starter Ian Anderson was lifted for a pinch-hitter in the fourth.

A.J. Minter struck out four in two perfect innings. Matzek did the same in a much more tenuous situation, coming on in the seventh with runners at second and third and a run already in after Luke Jackson failed to get an out.

Matzek struck out the side that inning, including Mookie Betts on three straight pitches to strand both runners. The pitcher pumped his fist twice and let out a scream on his way off the mound.

The left-hander returned in the eighth for another perfect inning, including his fourth K, before Smith fanned two more hitters in a 1-2-3 ninth.

Matzek has 11 strikeouts with runners in scoring position in the seventh inning or later this postseason.

Not bad for a guy who didn't play at all in 2017 and worked his way to the Braves with two stints in an independent league.

Dodgers: After a streak of seven straight victories in elimination games was snapped, they won't play another game that counts until the 2022 season opener against the Colorado Rockies. That comes on March 31 at Dodger Stadium.

Braves: Charlie Morton is set to go against his former team in the World Series opener. He memorably came out of the bullpen in Game 7 of the 2017 Series to pitch four innings of two-hit ball, closing out the lone title in Astros history with a 5-1 win over the Dodgers.