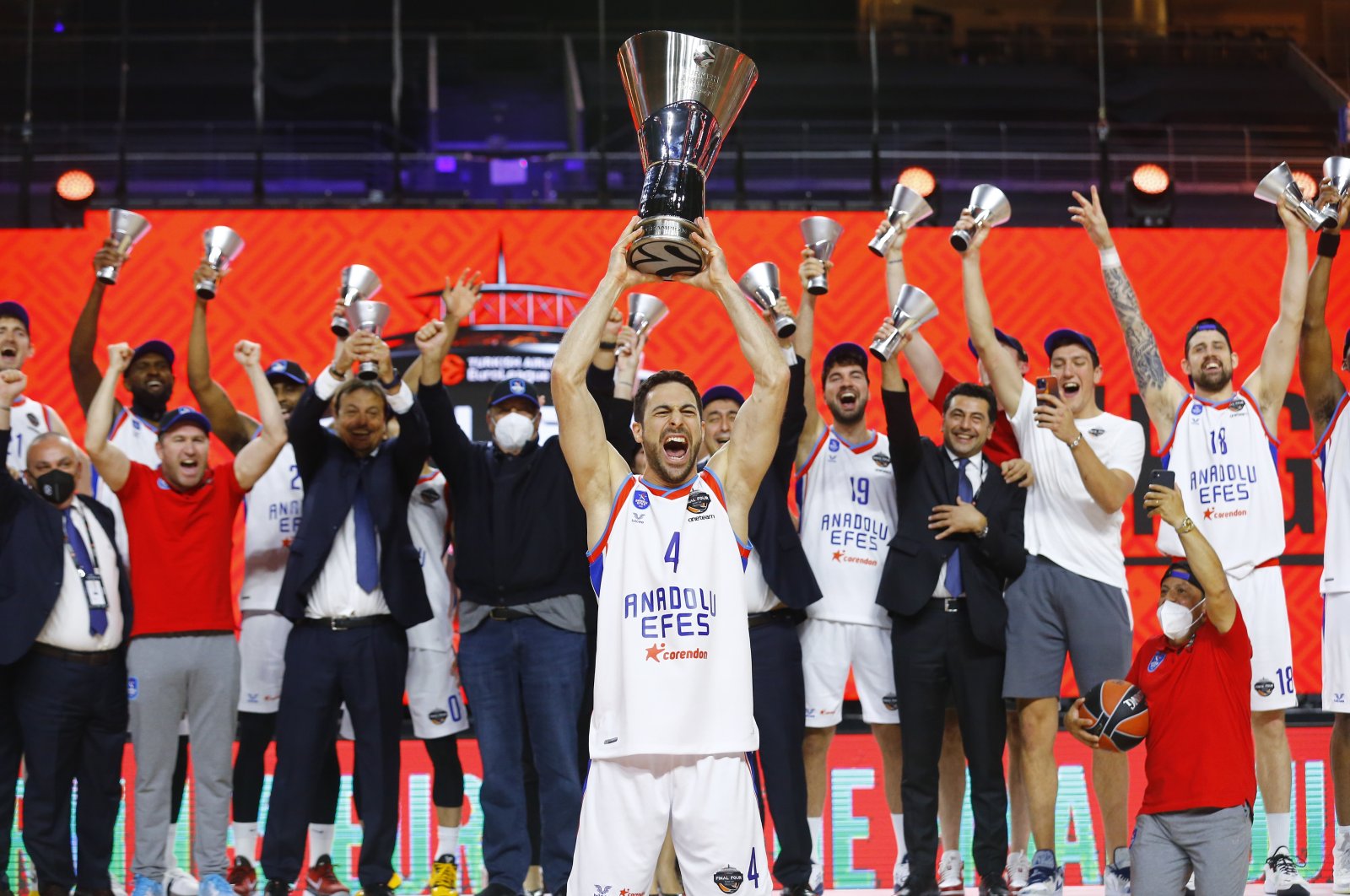 Anadolu Efes's Doğus Balbay celebrates with the trophy and teammates after winning the THY EuroLeague at Lanxess Arena, Cologne, Germany, May 30, 2021. (Reuters Photo)
by Agencies May 30, 2021 11:48 pm
RECOMMENDED

Efes became the second Turkish team to win the EuroLeague since Fenerbahçe’s Final Four victory back in 2017.

The victory made all the players on the team champions for the first time as well as Ergin Ataman, who became the first Turkish-born head coach to lift the trophy.

On the night, Efes staved off a late Barcelona charge as the Catalonians came back from an 11-point deficit to tie the game in the fourth quarter and was within one with 3 minutes 25 seconds remaining.

Vasilije Micic, however, came to the Istanbul side’s rescue as he scored seven points in the final 3 minutes to make sure Efes went home with the trophy.

Micic finished with 25 points and five assists, while his backcourt mate Shane Larkin added 21 points, while Sertaç Şanlı chipped in with 12 for the winners, reports the EuroLeague official website.

Cory Higgins led Barcelona with 23 points and Kyle Kuric netted 18. Brandon Davies tallied 17 points and 11 rebounds and Nikola Mirotic added 11 and nine for Barcelona, which came up short in its bid to win its third continental crown and first since 2010.

The Spanish side made a better start to the game and the score was 22-15 in favor of Barcelona when the first quarter ended.

Barcelona had opened the scoring on the game's first possession through a Victor Claver tip-in before Davies picked Krunoslav Simon's pocket and raced for a slam.

Şanlı scored twice inside to get Efes going. He remained a weapon inside; his 3-point play and a free throw on the next possession gave Efes a 6-8 lead.

Davies, meanwhile, went to work for Barcelona with a basket-plus-foul on the offensive glass, a score in the paint and drawing two fouls from Şanlı.

After Chris Singleton's free throws briefly gave Efes the lead, Davies put back his own miss and Higgins drilled a 3-pointer. Kuric added a free throw and a layup to make it 20-13.

After Micic's free throws and a fast-break bucket from Kuric, Barcelona led 22-15 after 10 minutes. A basket-plus-foul from Leandro Bolmaro in transition gave Barcelona a double-digit advantage.

Adrien Moerman's tip started the Efes revival. Bolmaro committed an unsportsmanlike foul on Larkin after a steal and the resulting free throws and a Tibor Pleiss triple – Efes's first of the game – made it 25-22, prompting a Barcelona timeout.

Simon capped a 0-9 run with a bank shot. Alex Abrines and Higgins gave Barcelona some breathing room with free throws only to see Larkin attack and get to the free-throw line, from where he made six shots in a 0-12 run that gave Efes a 29-36 lead.

Bolmaro ended the Barcelona drought and Kuric drilled a three from the corner and made a pair of free throws. Rodrigue Beaubois split free throws with 1 second left in the second quarter to send the teams to the locker rooms at halftime with the score on 36-39.

Micic scored on either side of an offensive foul called on Higgins as Efes jumped ahead 39-46. Mirotic got his first points of the game, but a four-point play by Micic made it 41-52.

Kuric and Larkin traded 3s. Higgins shined with a block, a layup and a pull-up three, but Micic was only getting stronger for Efes and Bryant Dunston and Beaubois added points for Efes from the line.

Şanlı countered with an alley-oop dunk, courtesy of an assist from Larkin. Davies made a wide-open 3 and then fed Mirotic for a bucket that tied it at 69-69 with 5 minutes left, which caused Efes to call timeout.

Micic responded with a 3 from the top of the key only to see Higgins answer with a 3-point play. Larkin hit back with a basket-plus-foul, too.

After Davies and Singleton traded baskets, Micic drove for a layup that made it 74-79 with less than 3 minutes remaining.

Micic matched Higgins's free throws with a basket in penetration. Davies missed a three and Kuric missed on the break as Barcelona started to run out of time.

Larkin added two free throws for a seven-point lead with 32.7 seconds to go and Barcelona missed its next two shots.

Kuric gave Barcelona hope when he made three free throws with 12.1 seconds on the clock to make it 81-84, but Micic got to the line and iced the game with 7.3 seconds left.