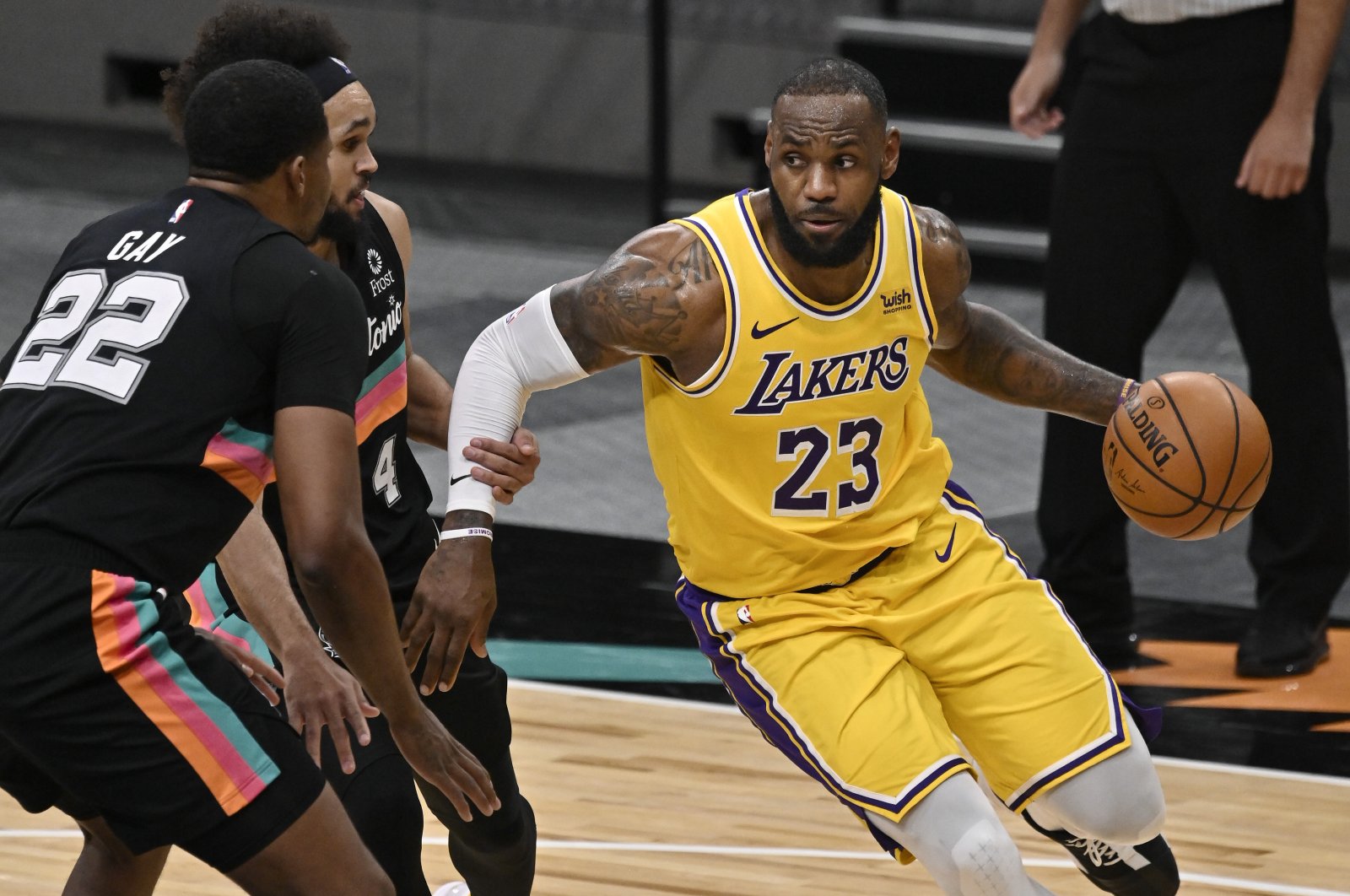 Anthony Davis had 35 points and 11 rebounds, and LeBron James added 26 points, 11 rebounds and 10 assists and the Los Angeles Lakers rallied to beat the San Antonio Spurs 109-103 on Friday night.

The Lakers closed with a 9-0 run for their second victory over the Spurs in three days.

Keldon Johnson had a career-high 26 points and added 10 rebounds, and DeMar DeRozan had 23 points, nine rebounds and seven assists for San Antonio.

Johnson blocked James’ layup attempt, but Kyle Kuzma tipped in the follow to give the Lakers a 105-103 lead with 53.9 seconds remaining. James followed with a layup, and Davis closed the scoring with two free throws.

Chris Paul hit a clutch jumper with 7.3 seconds remaining after a successful coach’s challenge on the other end and Phoenix beat Denver to improve to 5-1 for the first time since 2009-10.

With Phoenix leading 102-100 with around 30 seconds remaining, Mikal Bridges was called for a foul that would’ve sent Gary Harris to the line. But Suns coach Monty Williams successfully challenged the play, with replays showing Bridges slid underneath Harris with no contact.

Phoenix won the jump ball and Paul hit a jumper to send the Suns to the victory after blowing a 16-point lead. Jamal Murray’s shot at the buzzer rimmed out.

Deandre Ayton had 22 points and 11 rebounds, Devin Booker added 22, and Paul 21 for Phoenix, which won the night before in Utah. The red-hot Suns have won 13 of their last 14 dating to their perfect stint inside the NBA bubble.

Murray returned from a bruised right elbow and found his range early, scoring 14 of his 31 points in the first quarter. Denver fell to 1-4.

Milwaukee shot 22 of 45 from 3-point range, and Antetokounmpo was two assists from a second straight triple-double. The reigning two-time MVP had 26 points, 13 rebounds and 10 assists Wednesday in a 119-108 loss at Miami.

The Bucks have beaten the Bulls 11 straight times, the second-longest winning streak by either team in the history of this series.

Chicago played its second straight game without forwards Lauri Markkanen and Chandler Hutchison as well as guards Ryan Arcidiacono and Tomas Satoransky as part of the NBA’s health and safety protocols related to COVID-19. Markkanen is the Bulls’ second-leading scorer (17.3) and top rebounder (6.8).

Zach LaVine had 16 points for the Bulls.

Bradley Beal had 31 points and seven assists and Washington beat Minnesota without Russell Westbrook for its first victory in six games this season.

Westbrook sat out for rest on the second game of a back-to-back,, but the Wizards (1-5) didn’t look like the same team that lost the night before at home to Chicago.

Malik Beasley scored 21 points for Minnesota. The Timberwolves who have lost three in a row with star center Karl-Anthony Towns missing all three games because of a dislocated left wrist.

Luka Doncic had season highs of 27 points and 14 rebounds for his first double-double of the season to lead Dallas past Miami.

Tim Hardaway Jr. added 18 points to helps the Mavericks rebound from a 118-99 loss at home to Charlotte on Wednesday night.

Bam Adebayo scored 19 points for Miami, and Avery Bradley had 15 for Miami. Jimmy Butler scored two points, both on free throws, while playing 27 minutes in his first appearance since playing only the first half on Christmas against New Orleans because of a sprained right ankle.

Mike Conley made seven 3-pointers and scored a season-high 33 points to lead Utah past Los Angeles.

Conley also had seven assists, and Donovan Mitchell added 15 points for the Jazz. Derrick Favors chipped in with 14 points and 11 rebounds off the bench in Utah's first home victory of the season.

Derrick Rose and rookie Saddiq Bey each added 17 points for the.

Jayson Tatum had 28 points for the Celtics. Jaylen Brown scored 25, but missed a tying 3-pointer in the final seconds.

Trae Young added 21 points and John Collins had 20 for Atlanta. The Hawks improved to 4-1, splitting a back-to-back set with Brooklyn at Barclays Center.

Kevin Durant scored 28 points for the Nets. They have lost three of four.

Damian Lillard joined Hall of Famer Clyde Drexler as the only Portland players to score 15,000 points for the franchise, finishing with 34 as the Trail Blazers spoiled Golden State’s home opener.

CJ McCollum added 28 points for Portland, knocking down 4 of 5 3-pointers early as the Trail Blazers hit 10 of 15 from long range to start the game.

Stephen Curry had 26 points, eight rebounds and five assists for the Warriors. Andrew Wiggins scored 15 and Kelly Oubre Jr. contributed 10 points in his first home game with the team.