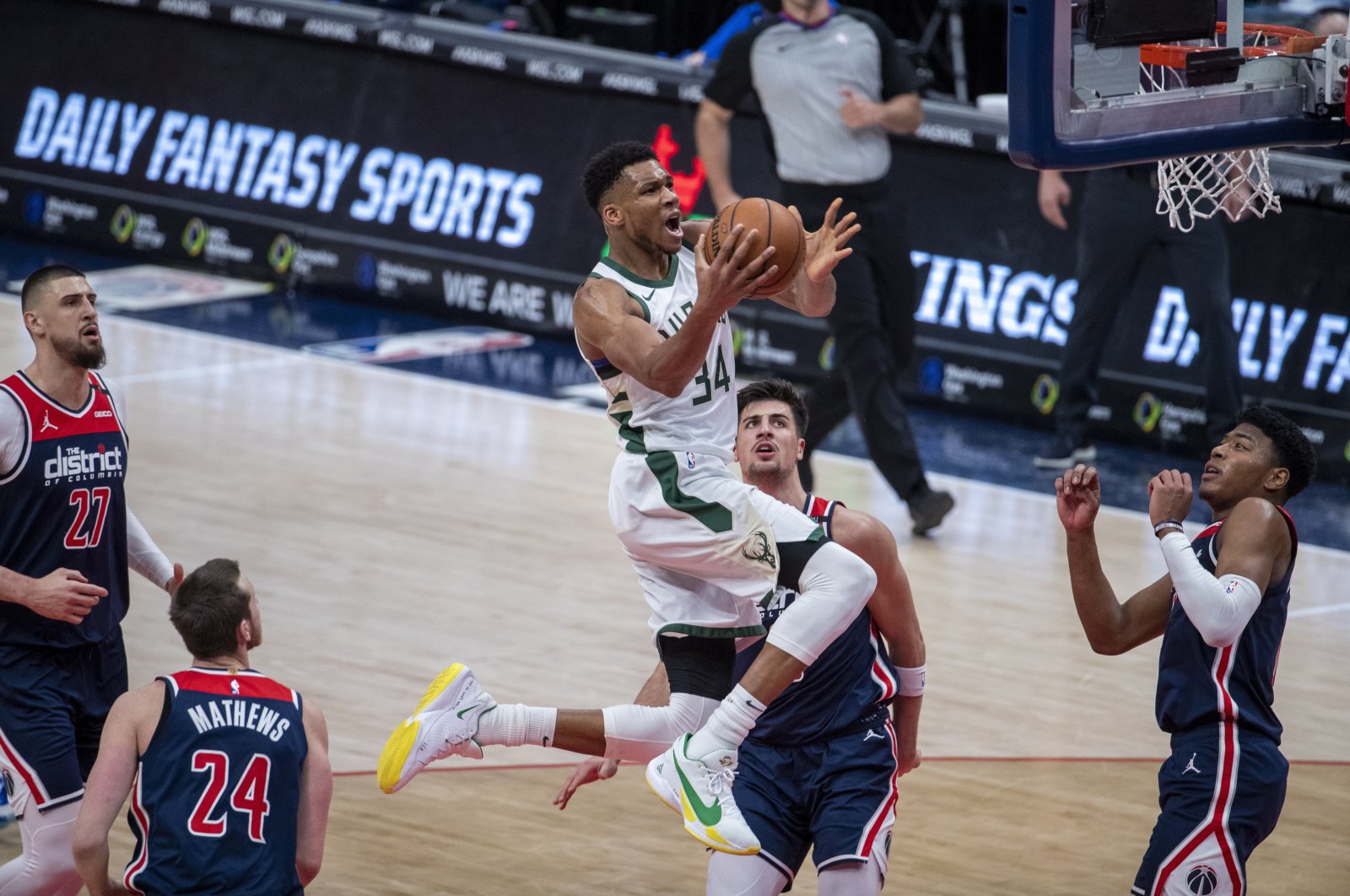 Giannis Antetokounmpo's triple-double of 33 points, 11 rebounds and 11 assists propelled the Milwaukee Bucks to a 125-119 NBA victory over Washington on Saturday, despite Russell Westbrook's 42-point triple-double for the Wizards.

It was part of an explosion of five triple-doubles on the day – an NBA single-day record.

Westbrook added 10 rebounds and 12 assists for Washington, but even with his league-leading 11th triple-double of the season, the Wizards missed the production of NBA leading scorer Bradley Beal, who sat out with a sore knee.

Jrue Holiday added 10 of his 18 points in the fourth quarter for Milwaukee as the Bucks held on in the back-and-forth battle despite a fierce late challenge from the Wizards, who knotted the score at 119-119 with 41 seconds remaining.

Milwaukee's Khris Middleton made two free throws with 32.9 seconds to play then forced a driving Westbrook into a miss with 25 seconds left.

"No doubt, that's the game right there," Bucks head coach Mike Budenholzer said. "You talk about wanting to win a game with stops and that's what we were able to do."

On the other end, Middleton drained two more free throws to help the Bucks seal the win.

Antetokounmpo's triple-double was his second straight and his sixth of the season.

He was just one of eight Bucks players to score in double figures as Milwaukee won their third straight and solidify their hold on third place in the East behind the Philadelphia 76ers and the Brooklyn Nets – who beat the Detroit Pistons 100-95 on Saturday behind a triple-double from James Harden.

Harden scored 12 of his 24 points in the fourth quarter. He added 10 rebounds and 10 assists and the Nets hung on after the Pistons took a one-point lead with less than three minutes remaining to pull off the gritty win.

Kyrie Irving added 18 points for the Nets, who remained without star Kevin Durant as he recovers from a hamstring strain.

"I had to be aggressive," Harden said. "Things weren't going great for us offensively. I think defensively we were playing hard and it showed, but it was one of those nights where we've just got to find a way to win.

"I just wanted to be a little more aggressive in the last two minutes."

The New York Knicks notched their 20th win of the season, 119-97 over the Thunder in Oklahoma City, fueled by Julius Randle's second triple-double of the season.

Randle scored 26 points with 12 rebounds and 12 assists, becoming the first Knicks player since Mark Jackson in 1987-88 to post multiple triple-doubles in the same season.

"Obviously the Knicks have so much history and tradition, so to be a part of that is obviously a blessing for sure," Randle said.

RJ Barrett added a career-best 32 points on 12-of-21 shooting as the Knicks bounced back from a 33-point loss to the Bucks on Thursday.

Indiana forward Domantas Sabonis joined the triple-double outburst with his fifth of the season, scoring 22 points with 13 rebounds and 10 assists to help the Pacers to a 122-111 victory over the Suns in Phoenix.

Malcolm Brogdon scored 25 points for the Pacers, who had 13 from Caris LeVert – who made his Indiana debut almost two months after a post-trade physical exam revealed a small cancerous mass on one of his kidneys.

LeVert, who arrived with the Pacers from Brooklyn in the multi-team deal that sent Harden from Houston to the Nets, had surgery in January, when the team said he would require no further treatment.

"I'm just happy to be on the court," said LeVert, who admitted that two months earlier he didn't know when he might return.

"The main thing for me was to try to contribute to a win," added LeVert, who got the start and played almost 27 minutes."That's what I'm all about."