Efes hosts Zalgiris, Fener travels to Valencia in THY EuroLeague 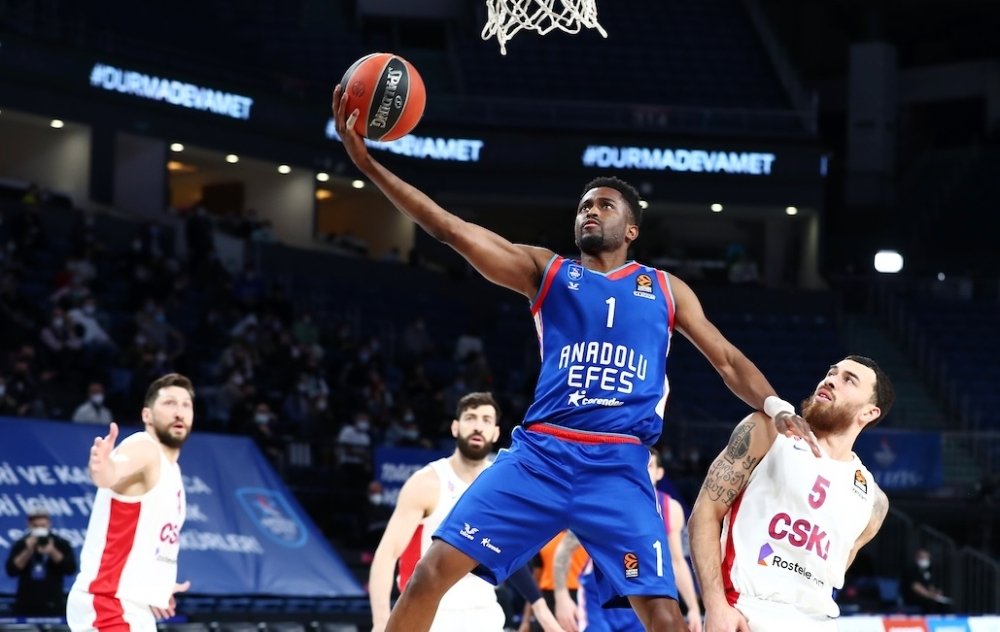 Both Istanbul clubs are two of the hottest teams in the league right now. Efes is on a six-game winning streak, while Fenerbahçe has won 12 of its last 13 games

Anadolu Efes and Fenerbahçe will play their Turkish Airlines EuroLeague Round of 29 matches on Friday. Efes will host Lithuania’s Zalgiris, while Istanbul powerhouse Fenerbahçe will travel to Spain for a face-off against Valencia.

Fifth-placed Anadolu Efes and the ninth-placed Zalgiris (15-13) are riding two different waves but will have the same goal in mind when they face each other, according to the EuroLeague’s official website.

Efes is arguably the hottest team in the league right now, riding a six-game winning streak, the last of which was a landslide against defending champion CSKA Moscow, 100-70.

Zalgiris, on the other hand, has lost four of its last six games despite giving it all to stay in the tight playoff race. Their last match ended in a 64-69 home defeat to Milan.

In such a close playoff race, everything is at stake for these two teams, who are only two wins apart.

Efes and Zalgiris have previously played each other 17 times in the modern EuroLeague. The Lithuanian champion currently holds the high ground in the series, 7-10.

In Round 4, Zalgiris snapped Efes's three-game winning streak in its head-to-head duels. In that game, Zalgiris won 89-73 at home behind 17 points by Nigel Hayes. For Efes, whose biggest star, Shane Larkin, was still injured, Bryant Dunston led the way with 20 points.

Efes’ Shane Larkin and Zalgiris’ Thomas Walkup will be the protagonists of an electric duel on Friday night.

Larkin has averaged 14.7 points, 2.7 rebounds, 4.4 assists and 1.6 steals and has been one of the main catalysts in the Efes resurgence in the last months.

For Zalgiris, Walkup has started in all his 28 appearances this season, averaging 7.0 points, 3.1 rebounds, 4.5 assists and 1.1 steals even though he was held scoreless last week for the first time in the EuroLeague since Round 18 of the 2018-19 season.

Two of Valencia Basket's core players will stare at their former team when Fenerbahçe visits on Friday.

Valencia was 9-4 at home last season and has won its last two home games against CSKA Moscow and Real Madrid.

The last time they met, Valencia claimed an 86-90 comeback road win in Round 11, back in November. Valencia overcame a 43-33 halftime lead with a 0-10 start to the third quarter and then followed its guards in the fourth quarter to a late victory.

Valencia's defense held Fenerbahçe to a 7-for-19 2-point shooting (36.8%) after halftime to secure the victory.

Fener’s Nando De Colo, who made his EuroLeague debut as a Valencia player a decade ago, has scored at least 20 points in five straight games, averaging 23.6 points on great shooting plus 6.0 assists during that time.

While no player can single-handedly stop De Colo when he's on a roll, one way to slow him down is to attack him on the other end. Valencia will turn to its top scorer Klemen Prepelic, who has 12.0 points per game ppg, for that.

Valencia is 11-2 this season when it has scored at least 80 points and Fenerbahce is 4-10 when it has failed to reach the 80-point mark, so both teams will be pushing for a high-scoring game.

The Spanish side’s balanced attack will be critical to that effort with Bojan Dubljevic, Mike Tobey, Kalinic and Williams needed to score inside and Prepelic and Sam Van Rossom from deep to keep the Fenerbahçe defense on its heels.