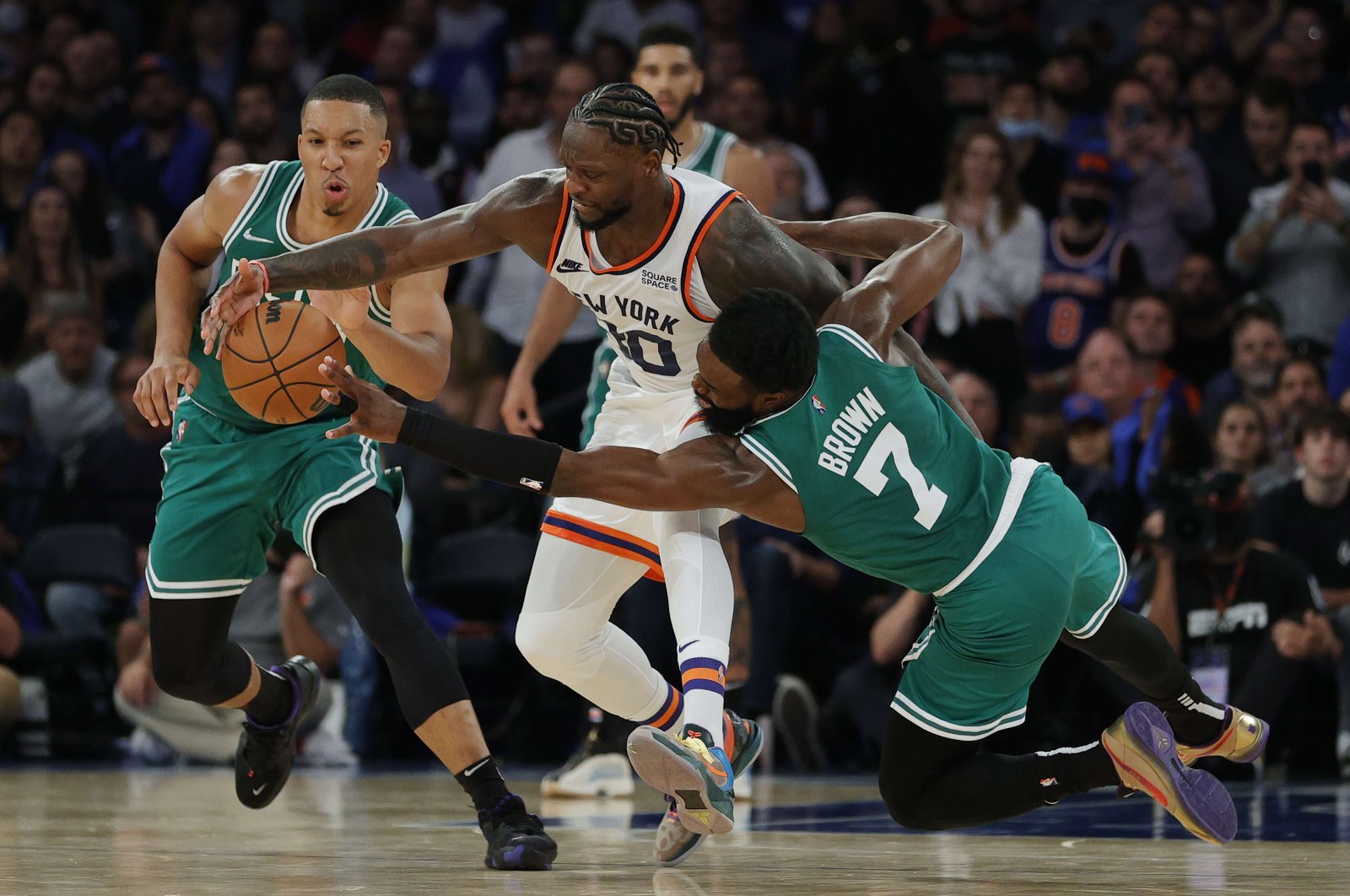 Julius Randle and Evan Fournier led the way for the Knicks. Randle had 35 points, while debutant Fournier added 32 – including a crucial 3-pointer in the final minute of the second overtime period – as the Knicks held on for a dramatic win.

Boston forced overtime after Marcus Smart drilled a 25-foot buzzer-beating 3-pointer to tie the game at 116-116.

The Celtics were sparked by a 46-point display from Jaylen Brown, who led the scorers and finished with nine rebounds and six assists.

"I can't wait to go home and lay on the bed, I swear," a shattered Randle said after the victory. "First game back? Sheesh, goodness. I'm tired.

"Every time before we go out, coach always puts on the board, 'Find a way to win.' And we got it done. This is why we take the preseason seriously, so we can win games like this," Randle added.

"The energy in this building – I can feel it, I'm loving it," Fournier said. "I'm just very happy. I think about all the work we did in the preseason, doing all the extra conditioning. At the end, it was just mental."

No Simmons, no problem

The Sixers' preseason has been dominated by the soap opera involving unsettled star Simmons, who was suspended from Wednesday's opener after a reported bust-up at team practice on Tuesday.

But there was no sign of the dressing room rancor affecting the Sixers as last season's Eastern Conference champions cruised to an emphatic win on the road in the Big Easy.

Embiid, who had been sharply critical of Simmons's conduct on Tuesday, was one of six Philadelphia players to make double figures.

The two sides reached halftime locked at 53-53, but the Sixers cut loose in the third quarter, outscoring the Pelicans 28-17 to take a stranglehold on the contest before piling on 36 points in the final quarter.

Embiid led the Sixers scoring alongside Korkmaz, while Tobias Harris and Tyrese Maxey, starting in place of the suspended Simmons, each had 20 points.

Brandon Ingram led the scoring for the Pelicans with 25 points, while Nickeil Alexander-Walker added 23. The Pelicans started their campaign without Zion Williamson, who is recovering from surgery to repair a foot injury.

In other games Wednesday, Karl-Anthony Towns finished with 30 points as the Minnesota Timberwolves breezed past the Houston Rockets 124-106.

Anthony Edwards added 22 points, while D'Angelo Russell scored 22 for Minnesota against a Rockets team who trailed by 35 points at one stage late in the fourth quarter. Christian Wood led the Rockets scoring with 16 points.

In Phoenix, reigning NBA MVP Nikola Jokic led the Denver Nuggets to a 110-98 victory over the Suns with a 27-point haul.

Phoenix led by seven at halftime, but Denver turned the screw after the interval, outscoring the Suns 59-40 in the final two quarters.