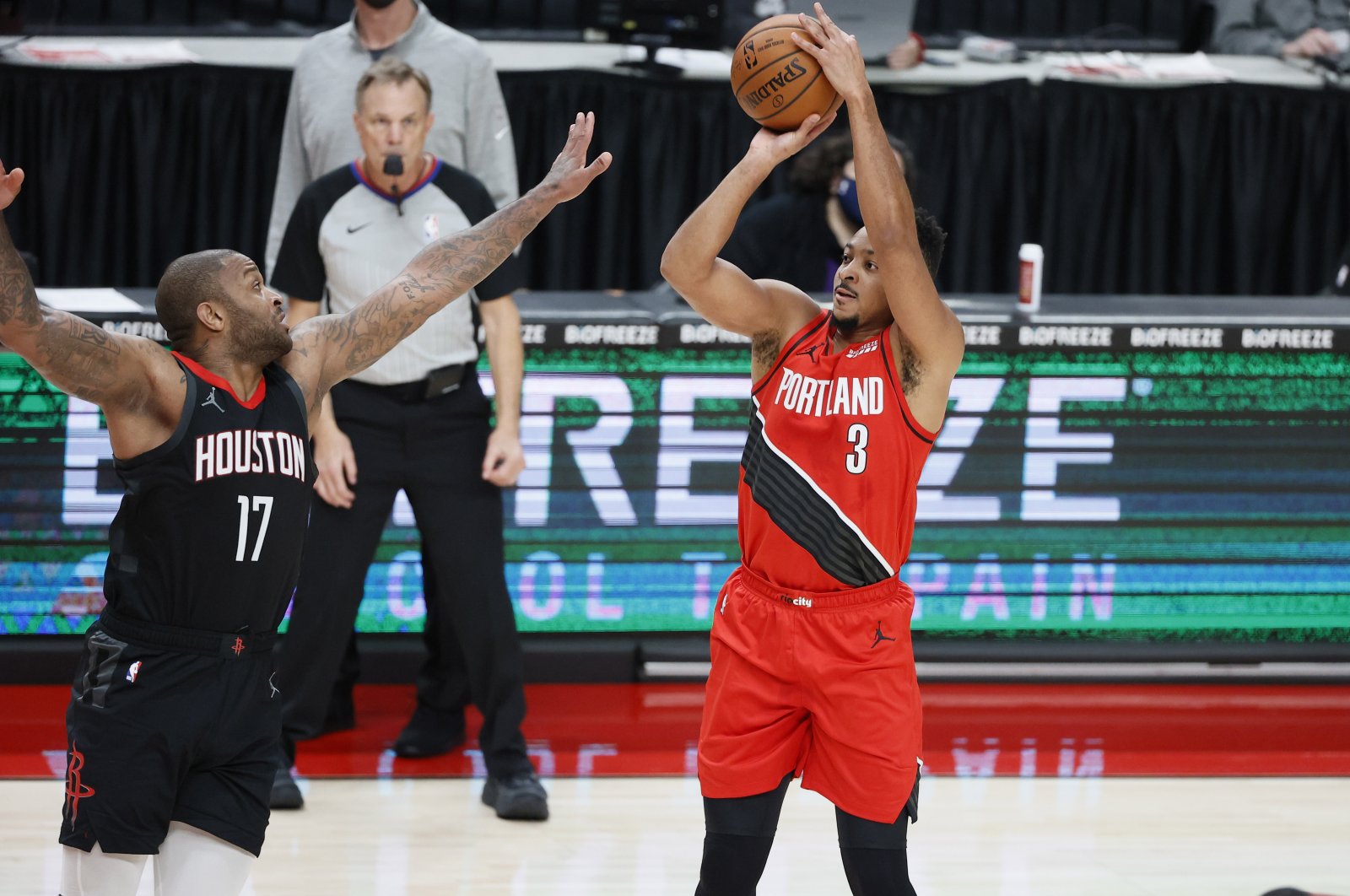 McCollum scored 44 points, with a career-high nine three-pointers, and Damian Lillard added 32 as the Trail Blazers withstood a 44-point, 17-assist performance by Harden.

Center Christian Wood added 31 points for the Rockets, who had just nine players in uniform – one above the NBA minimum of eight – after two players tested positive for COVID-19 and four more were listed as unavailable due to "health and safety protocols" after being declared close contacts of those with the virus.

The Rockets' scheduled season opener against Oklahoma City had been postponed when they could not field eight players.

Harden was among those unavailable on Wednesday after it was deemed he had violated NBA anti-COVID-19 measures that ban players from attending gatherings of more than 15 people.

He was fined $50,000, in the latest installment of pre-season drama surrounding Harden, who turned up late to training camp amid reports he has demanded to be traded.

The three-time, reigning NBA scoring champion played more than 43 minutes. He connected on 12 of 22 shots from the field, including six three-pointers.

But the Trail Blazers responded, with Lillard driving toward the basket then passing the ball to McCollum who calmly sank a 3-pointer of his own.

"I just got to the corner," McCollum said. "I knew (Lillard) was going to be aggressive, he drew a crowd. My man turned his back so I just relocated to the open area and knocked down the trey."

The Rockets had the ball again after a timeout, but Robert Covington came up with the steal from Harden as he was driving toward the basket.

In Detroit, Cleveland guard Collin Sexton scored 32 points, including a layup to force a second overtime as the Cavaliers beat the Detroit Pistons 128-119.

Andre Drummond added 23 points against his former team, Cedi Osman scored 22 off the bench and Darius Garland chipped in 21 as the Cavaliers rallied from a 9-point deficit with 2:15 left in the first overtime.

The Pistons appeared to seize control in the third quarter when Jerami Grant scored 14 of his 28 points. Blake Griffin scored 26 points and Derrick Rose had 13, but the Pistons – with 24 turnovers leading to 31 Cavaliers points – could not hang on for the win.

It was close in Charlotte, where Oklahoma City's Shai Gilgeous-Alexander drained a game-winning jump shot with 1.4 seconds left in the Thunder's 109-107 season-opening win over the Hornets.

Oklahoma City led by 13 with less than two minutes to play and held off a Hornets rally to gain the win.

Miles Bridges scored three 3-pointers in the final 25 seconds as the Hornets battled back, knotting the score at 107-107 with 10.3 seconds remaining.

But Gilgeous-Alexander took an inbounds pass and drained a jump shot over Caleb Martin to seal it for the Thunder.

A triple-double from Russell Westbrook and 39 points for Bradley Beal were not enough for the Washington Wizards, who fell 130-120 to the Orlando Magic.

Westbrook joined another elite club with 15 points, 15 rebounds and 12 assists, becoming just the fourth player in NBA history – after Magic Johnson, Jerry Lucas and Oscar Robertson – to post a triple-double in his team's first two games of a season.

But his home opener for the Wizards, where he landed in a trade from Houston, was another defeat. Terrence Ross led the Magic with 25 points off the bench. Nikola Vucevic scored 22 points and grabbed 17 rebounds and Markelle Fultz added 21 for Orlando.

The victory moved Rivers into sole possession of 10th place on the NBA's all-time wins list, his 945th victory in his 22nd season as a head coach, moving him ahead of Bill Fitch.