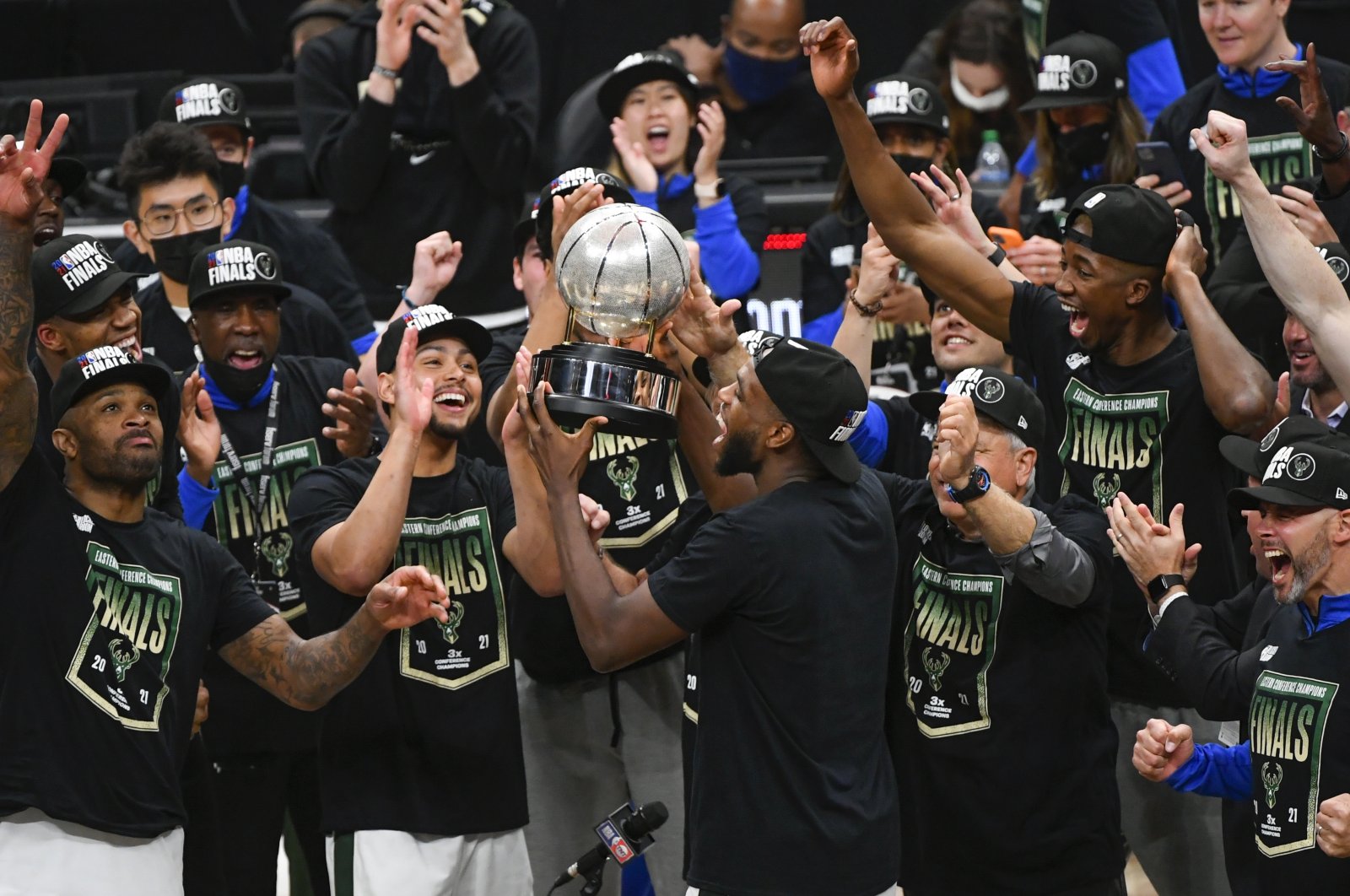 Milwaukee Bucks secured their first NBA Finals in 45 years as Khris Middleton poured in 32 points to power his side to a series-winning 118-107 victory over the Atlanta Hawks Saturday.

The third-seeded Bucks beat the host Hawks in the best-of-seven series 4-2 to book their first appearance in the league championship since 1974.

"As a little kid, everybody wanted to be part of this chance to go to the finals. This is amazing," said Bucks guard Jrue Holiday.

Milwaukee will face the Western Conference champion Phoenix Suns in the finals which begin Tuesday.

The Bucks earned the Eastern Conference championship trophy, celebrating with it on the Hawks' State Farm Arena floor.

"It is sweet. These guys have put the work in all year. They deserve to go to the finals," said Milwaukee coach Mike Budenholzer. "We've got more work to do."

The Bucks won despite the absence of two-time league MVP Giannis Antetokounmpo, who sat out with an injured left knee. The 26-year-old Greek forward hyperextended the joint when he landed awkwardly in game four of the series.

The Hawks got their top player Trae Young back after he missed the previous two games with a bruised foot. But Young struggled to score in game six, shooting just four-of-17, missing all six of his 3-point attempts and finishing with just 14 points.

Young said he wasn't fully recovered from the injury but decided to try his luck.

"I didn't want to go and not play and think to myself all off-season what if I could have been out there and played," said Young.

"It would have hurt me so I just decided to go out and play and leave it all out on the floor."

Holiday stepped up for the second straight game to help fill the offensive void with Antetokounmpo out, flirting with a triple-double and finishing with 27 points, nine rebounds and nine assists.

Brook Lopez, who was the star of Thursday's game five wins with 33 points, delivered 13 points on Saturday for the Bucks.

The young Hawks, who last made it to the finals 60 years ago when they were based in St. Louis, were trying to force a seventh game.

Cam Reddish came off the bench to score a team-high 21 points, Bogdan Bogdanovic had 20, and John Collins finished with 13 points and 11 rebounds in the loss.

Middleton shot 10-of-22 from the field and made all eight of his free throws as he scored 16 straight points for the Bucks in the second half.

"I just tried to shoot and be confident, and just play the right way," Middleton said.

The Bucks started quickly, jumping out to a 15-4 lead in the first quarter after a Lopez dunk. The Hawks clawed their way back into it in the second quarter to trail by just four, 47-43, at the half.

But Milwaukee broke the game open in the third quarter by outscoring the Hawks 44-29 as Middleton and Holiday took charge of the offense.

Lopez made an alley-oop dunk with 1:29 to go in the fourth to make it 113-110 and PJ Tucker nailed a clutch 23-foot 3-pointer with 62 seconds remaining to stretch the Milwaukee lead to 10 points and help seal the win.

The second-seeded Suns will have a home-court advantage in the finals based on having a better record in the regular season.

Phoenix edged the Bucks in two games during the regular season, 128-127 in overtime in Milwaukee and 125-124 in Arizona.

They have met just once before in the postseason, back in 1978 when the Bucks won 2-0 in a best-of-three first-round series.

Championship experience will be lacking in the finals as no player on either team has won an NBA title before.