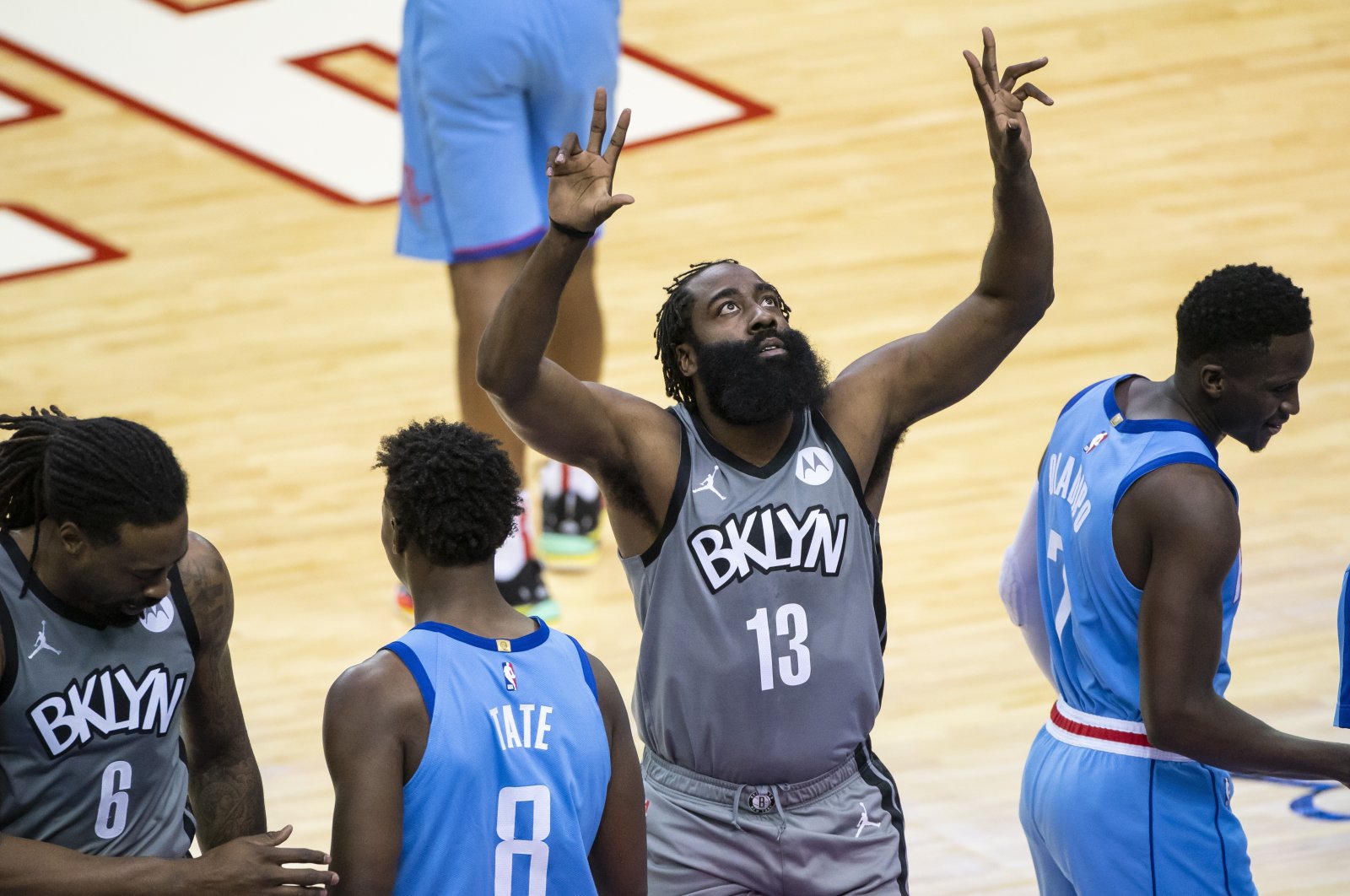 James Harden returned to Houston for the first time since his tumultuous departure from the Rockets on Wednesday, posting a triple-double to lead the Brooklyn Nets to a 132-114 victory over his former NBA team.

Harden, greeted by a first-quarter video tribute, cheers and a smattering of boos, delivered 29 points, 10 rebounds and 14 assists to fuel Brooklyn, where he finally landed in January after demanding a trade.

"I'm excited. I mean, we got a win," Harden said. "We've been playing very, very good basketball, and to finish out strong like this going into the All-Star break means a lot to us."

Harden was grateful for the tribute video that showcased his accomplishments in Houston, including the 2018 NBA Most Valuable Player award and the league scoring title the past three seasons.

He became just the sixth player in NBA history to record a triple-double in his first game against his former team, ably helping the Nets overcome the continued absence of Kevin Durant.

"As far as playing in Houston, a lot of mixed emotions with the fans, but I knew that was going to happen," he said. "I just wanted to come out here and give them a show. For me, once I get on that court, it's just 'Try to win.'

"I'm not really worried about anything else. So that was kind of my feeling: win the game and do whatever it takes and do what you've been doing."

In Philadelphia, Joel Embiid scored 40 points and pulled down 19 rebounds to lead the 76ers to a 131-123 overtime victory over the Utah Jazz in a clash of the top teams in the East and West.

The Cameroonian center drained a 3-pointer to knot the score at 118-118 with 6.5 seconds left in regulation and Tobias Harris scored 11 of his 22 points in overtime to lift the Sixers to victory over the league-leading Jazz.

Utah star Donovan Mitchell finished with 33 points, eight rebounds and six assists but was ejected after receiving his second technical in the extra period.

A frustrated Mitchell lashed out at game officials.

"I'm never, ever one to blame a ref, blame an official, but this is getting out of hand," Mitchell said of calls he felt should have gone Utah's way but didn't.

"There have been games like this we've won, games we've lost. We're nice, we don't complain, we don't get frustrated, we fight through things.

"But the fact that we continuously get screwed in a way by this ... it's getting ridiculous," added Donovan, who stormed off the court after his second technical for arguing with officials, kicking a water cooler toward a security guard as he departed.

Two West Coast games came down to the wire, as the Portland Trail Blazers edged the Golden State Warriors 108-106 and the Sacramento Kings beat the short-handed Los Angeles Lakers 123-120.

The defending NBA champion Lakers were again without injured forward Anthony Davis and missing LeBron James for the first time this season as he sat out with a sprained left ankle.

In their absence, Germany's Dennis Schroder led the Lakers with 28 points and nine assists.

But Schroder came up empty on a drive to the basket with 5.9 seconds remaining and the Lakers down by one. Montrezl Harrell grabbed the rebound but missed the putback attempt, Kyle Kuzma extended the Lakers' possession but also couldn't score and Harrison Barnes sealed it for the Kings with a pair of free throws.

Indiana point guard T.J. McConnell was the star in the Pacers' 114-111 victory over the Cavaliers in Cleveland, putting up an unconventional triple-double comprising 16 points, 13 rebounds and 10 steals.

McConnell broke the NBA record for steals in a first half with nine and just one shy of the best mark in a game, which stands at 11.

It was the 11th triple-double including steals since steals were recognized as a statistical category in the 1973-74 season.

"I was just playing with our defensive principles and trying to help run the team, I wasn't going out of my way to make steals," McConnell said. "We kind of dug ourselves a hole, so I'm happiest about the win."

A pair of more familiar triple-doubles, from Mason Plumlee and Dennis Smith Jr, powered the Detroit Pistons past the Toronto Raptors 129-105.

Plumlee had 14 points, 11 rebounds and 10 assists and Smith added 10 points, 12 rebounds and 11 assists – the first time since 1964 that two Pistons notched triple-doubles in the same game.