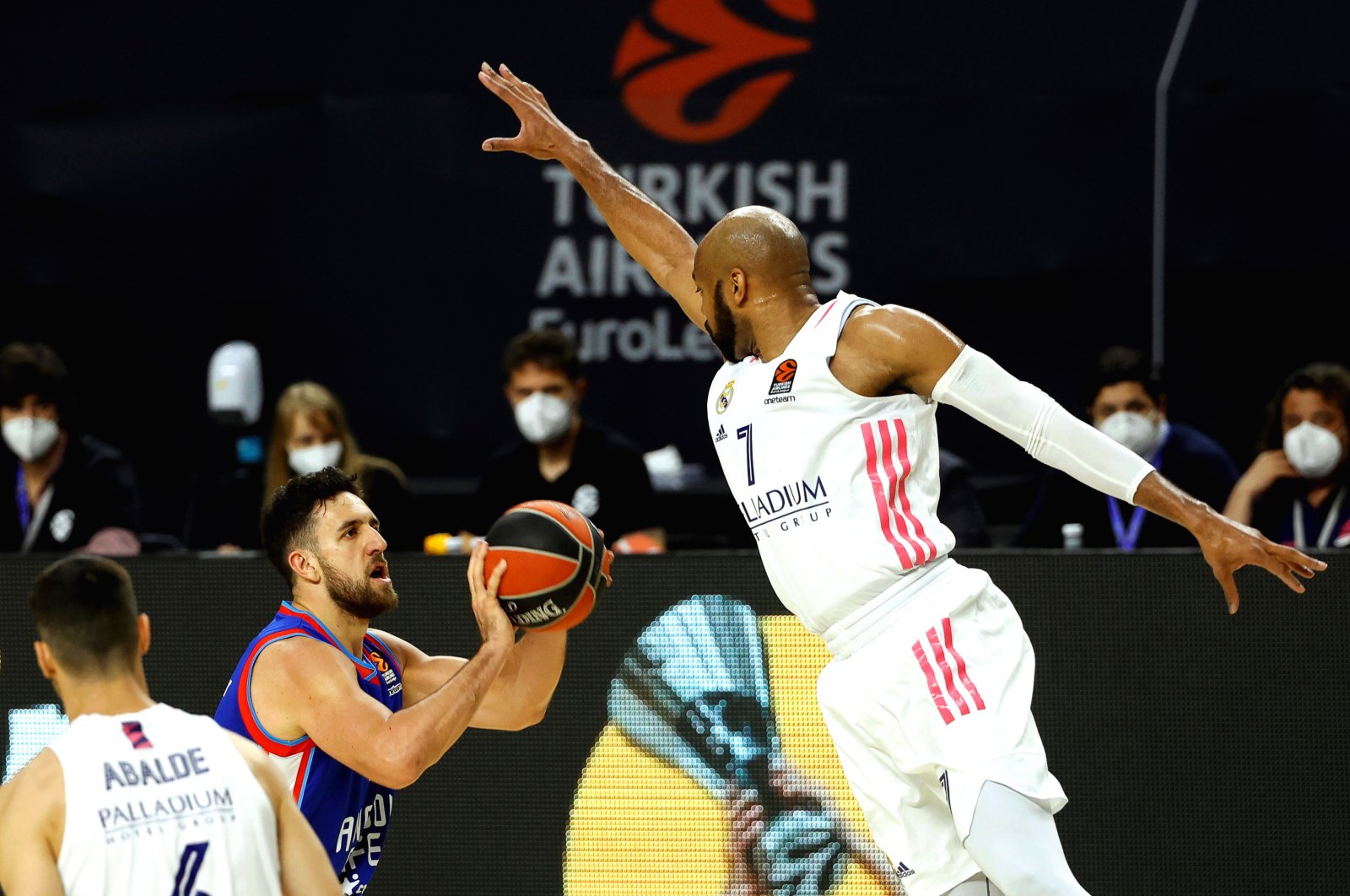 Spanish giants Real Madrid pulled off one of the biggest comebacks in THY EuroLeague Playoffs as it overcame a double-digit deficit to beat Turkey's Anadolu Efes 80-76 in Game 3 on Tuesday.

With the win, Real cut the best-of-five series deficit to 2-1, after a game in which Efes led by as many as 15 points on several occasions in the second half and 61-74 with 5 minutes left in the game.

However, inspired by Sergio Llull, the Spaniards hit five 3-pointers in the next four minutes to complete a comeback and stay alive in the series. Llull finished with 20 points and seven assists, Alberto Abalde scored 11 points, Usman Garuba had 10 points plus nine rebounds while Alex Tyus collected 10 points and seven rebounds.

Efes’ Vasilije Micic paced all scorers with 29 points and had six assists and three steals while Rodrigue Beaubois netted 18 points in a defeat.

"I am not surprised. I believe in this team. I think, when you are in this position, you have to fight until the end. And we did it," Llull said on the EuroLeague website.

"We are happy now, but we have to clear our minds and on Thursday we have another war," Llull added.

On the night, Efes missed its first seven field goals before Sertaç Şanli hit a mid-range jumper, followed by a pair of layups from Micic that gave the visitors their first lead.

Llull nailed a triple and after Alberto Abalde's 3-point, a jumper from Llull made it 13-8. However, Chris Singleton had a put-back layup and Beaubois hit a corner triple to tie it at 15-15 after 10 minutes.

Beaubois stayed hot early in the second quarter with nine points, which included a triple and a triple-plus-foul to make it 17-27.

Causeur answered by stringing together seven points – two floaters and a 3-pointer, but back-to-back triples from Şanli and Micic restored breathing room for Efes, 24-33.

Real kept going back to its 1-2-2 zone defense, which had Efes struggling, but the visitors kept control behind their defense. A triple from Micic made it 28-38 at halftime.

Beaubois and Carroll each banked in a shot from close range to start the third quarter before a triple from Beaubois made it 30-45. Carroll and Usman Garuba hit a triple apiece to cut into the deficit, getting the hosts within 38-47, but Micic and Simon knocked down back-to-back three-pointers for a 40-55 margin.

Efes was up by 58-66 with just under 7 minutes to go and Larkin hit a 3-pointer and Micic followed with one of his own before driving for a dunk that made it 61-74 with 5 minutes left. But, Llull and Abalde hit back-to-back 3s to spark the hosts' final run and Garuba fought to 75-76 with 1:35 left.

Real went front for the first time since the first quarter, 78-76, before Garuba scored a put-back with 22.5 seconds on the clock.

Real won to force Game 4 of the series, which it will host on Thursday night, still hoping to become the first team ever to come back from a 0-2 series deficit. Efes remains a win away from a trip to the Final Four.