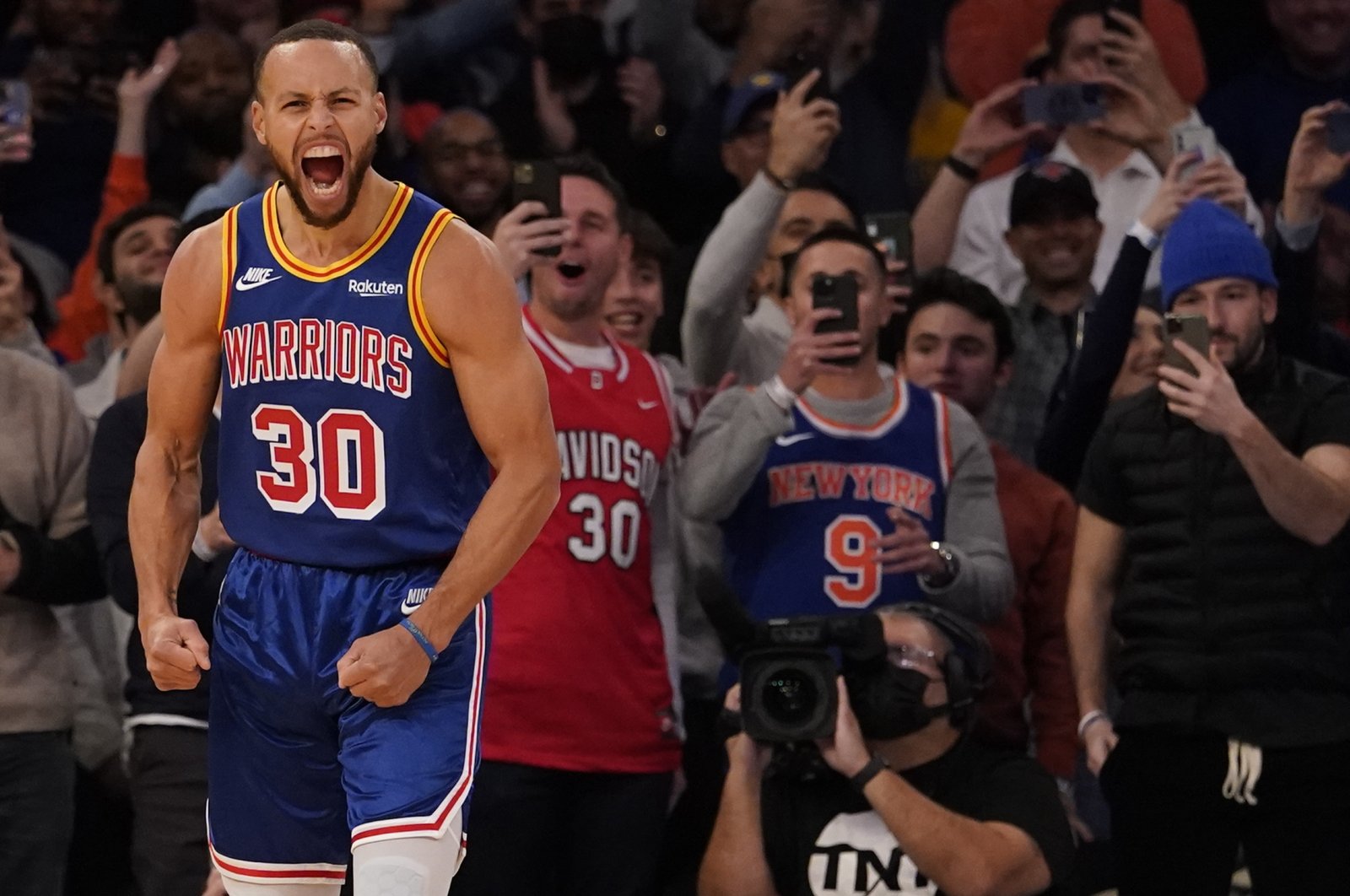 Curry, whose remarkable shooting range has revolutionized the NBA in his 13-year tenure, matched Allen's record with his 2,973rd career 3-pointer.

It came on his first shot of the clash with the New York Knicks, less than two minutes into the contest, and had the crowd on its feet.

He then missed a chance at breaking the record, but with 7:33 remaining in the opening period, Anthony Wiggins kicked the ball to him from the paint and he swished in number 2,974, letting out a yell as teammates celebrated with him and the New York crowd cheered.

"I can't say it enough, I appreciate so much the way the fans embraced the moment with me and let me just get kind of lost in it," Curry, 33, said.

Curry has been scorching towards overtaking Allen's record for years. He finally surpassed the milestone in his 789th career game; Allen achieved his old benchmark in 1,300 appearances.

Curry exchanged an emotional hug with coach Steve Kerr, who corralled the ball used in the record-setting shot.

Curry then embraced his father, former NBA player Dell Curry, as well as Allen, who was courtside.

"There was a lot of emotion for sure because I know how much work has gone into this, dreaming big from the time I first picked up a basketball," Curry said.

Kerr said the moment was "more emotional" than he had expected.

"It was just an outpouring of love and support for Steph from seemingly everybody in the building," Kerr said. "Beautiful, beautiful moment."

Curry is on pace to make well over 400 3-pointers this season, which would put him at more than 3,200 for his career.

He finished the night with five 3-pointers as the Warriors pulled away late to beat the Knicks 105-96 and improve their league-leading record to 23-5.

Curry's long-range prowess is such that there was real belief he could break the record with a single-game mark of 16 in a home game against the Portland Trail Blazers last Wednesday.

That didn't happen, but he did not have to wait too much longer.

Curry's 54-point performance against the Knicks on Feb. 27, 2013, at Madison Square Garden was a harbinger of a career that now includes three NBA titles and two Most Valuable Player awards.

"It's been a long week since our last home game, where everybody was talking about 16," he said.

"(It) seemed like every shot I took there was another level of anticipation and anxiousness around it.

"I was just trying to play my game. Tonight it kind of set up perfectly, made that first one, get that one out of the way and then just let the record-breaker come to me."

The atmosphere was electric even before the game, with Allen courtside and Reggie Miller, who held the 3-point record at 2,560 before Allen broke it in 2011, on duty as a television commentator.

Both chatted and shared a hug with Curry before the game, with filmmaker and Knicks super-fan Spike Lee catching the moment on his phone camera.

After the game, Allen and Miller presented Curry with a jersey with the number 2,974 emblazoned on it.

"Basketball history, this is pretty special," Curry said. "These two, legends. I watched them growing up and understood what it meant to shoot the ball because of them and my dad.

Reaction from around the league was swift.

"Just landed in Dallas to see @StephenCurry30 broke the record and to make it even doper he did it in the GARDEN!!" Los Angeles Lakers superstar LeBron James tweeted. "WOW CONGRATS BROTHER!! INCREDIBLE."

Curry and the Warriors won NBA titles in 2015, 2017 and 2018 against Cleveland Cavaliers teams led by James.

Just landed in Dallas to see @StephenCurry30 broke the record and to make it even doper he did it in the GARDEN!! WOW CONGRATS BROTHER!! INCREDIBLE

"He has revolutionized the way the game is played and continues to leave fans in awe with his amazing artistry and extraordinary shooting ability. We congratulate him on this historic achievement."

"Thank you @StephenCurry30 for revolutionizing the game of basketball forever!"