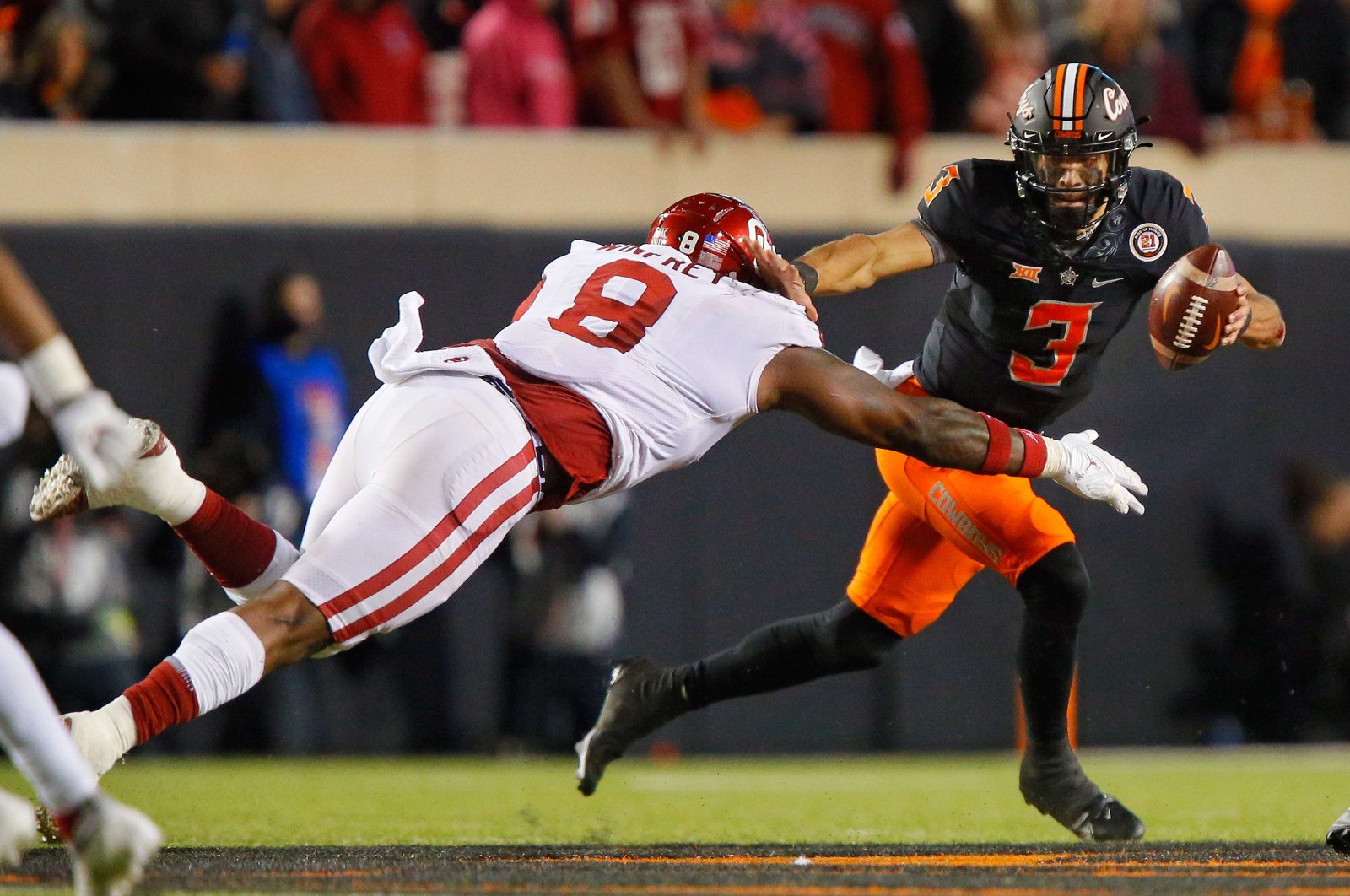 The last weekend of college football's regular season never ceases to provide its share of surprises, and as the games unfolded on Saturday, the No. 4 Cincinnati Bearcats, who finished their season undefeated the day before, were left constantly reevaluating their chances of crashing the College Football Playoff as No. 7 Oklahoma State and No. 6 Michigan both snapped lengthy losing streaks against their archrivals while No. 3 Alabama was taken to four overtimes before finally knocking off unranked Auburn.

Spencer Sanders threw for a touchdown and ran for another and No. 7 Oklahoma State beat No. 10 Oklahoma 37-33 on Saturday night to keep alive its playoff chances and stop the Sooners' streak of Big 12 titles at six.

Oklahoma State (11-1, 8-1, No. 7 CFP) snapped a six-game losing streak to Oklahoma. The Cowboys will play No. 9 Baylor next Saturday for the Big 12 championship. The Cowboys have a shot at their first Big 12 title since 2011.

“I told them we couldn’t be more proud of them for what they’ve accomplished," Oklahoma State coach Mike Gundy said. "That’s the good news. Next thing is, we need them all back here tomorrow afternoon. We’re in a one-week playoff again.”

Oklahoma (10-2, 7-2, No. 10 CFP) got the ball one last time at its 20-yard line with 54 seconds remaining and no timeouts. Caleb Williams scrambled and ran 56 yards to put the Sooners in scoring range.

“I wasn’t sure we were going to be able to catch him and get him down," Gundy said. “I’ve seen him do that on TV two, three, four times this year. Nobody ever catches him. He scores.”

Oklahoma State's Collin Oliver sacked Williams on fourth down at the Oklahoma State 32 with eight seconds remaining, setting off a wild celebration. Fans clad in orange and black poured onto the field to celebrate Gundy's third win in 17 tries against the Sooners. Songs such as “Friends in Low Places” by Garth Brooks and “All I Do Is Win” by DJ Khaled blared over the sound system.

Harbaugh tastes victory in The Game

Jim Harbaugh has always been a good coach.

No. 6 Michigan vanquished the Buckeyes on Saturday, ending a losing streak that has defined the program and its coach.

In Ann Arbor, the Wolverines were tougher and smarter, bludgeoning and confusing the Buckeyes with a well-schemed and well-blocked running game and getting after the No. 1 offense in the country with maybe the best pass-rushing combo in college football.

“It feels like the beginning,” Harbaugh said after he improved to 1-5 against Ohio State.

A year ago, it seemed like the end for Harbaugh at his alma mater.

Michigan was terrible during last season's abbreviated Big Ten schedule, going 2-4 and not even getting a chance to play Ohio State because of a COVID-19 outbreak before The Game.

Harbaugh was 49-22 through six seasons at that point, with no victories in the rivalry that mattered most. He had unquestionably made Michigan better since taking over in 2015, but Ohio State had soared to another level and left Harbaugh and the Wolverines behind.

After last season, Michigan and athletic director Warde Manuel faced a choice: Stick with Harbaugh, a demonstrably good coach, or dive into the market and hope to find someone better.

Michigan decided not to jump on the coaching carousel and trusted Harbaugh, though not so much that it didn't re-do his contract to make getting rid of him more affordable if this season didn't pan out.

With a new defensive staff and more confident and established offensive coordinator (Josh Gattis), Harbaugh delivered a team that perfectly matches his vision, with echoes of his greatest successes at Stanford and in the NFL with the 49ers.

Michigan's offense is a modernized version of ground-and-pound, supported by a defense that features two elite edge rushers in Aidan Hutchinson and David Ojabo.

Harbaugh returned to college football as its most fascinating coach, confident and quirky with all kinds of hype.

His failures against Ohio State turned into him into a punchline and easy target for critics: "This is your savior, Michigan?"

But if you are what your record says you are, Harbaugh is now 89-44 as a major college head coach and 44-19-1 as an NFL coach with a Super Bowl appearance.

One victory over Ohio State doesn't make Harbaugh a genius. Five losses against the Buckeyes didn't make him a dummy, though it was fair to question if he was making Michigan all it can be.

This might turn out to be a blip in the rivalry. Ryan Day, who inherited this Ohio State juggernaut from Urban Meyer, is still assembling one of the two or three most talented teams in the country every season.

But for a day Michigan and Harbaugh got the best of the Buckeyes, and the coach who opposing fans love to hate had once again become college football's most interesting man.

“There’s definitely stuff that people said that spurred us on even more. Sure," Harbaugh said and then added a not-so-subtle shot toward Day. "Sometimes people that are standing on third base think they hit a triple, but they didn’t.”

The Game is on.

A minute and a half to go and 97 yards to cover. Down a touchdown in college football's fiercest rivalry.

Alabama's Bryce Young put together a tying drive against Auburn that will seal a place for him in Iron Bowl history.

Young's 28-yard touchdown pass to freshman Ja'Corey Brooks was a thing of beauty, just inside the front pylon. It was a Heisman moment that got the third-ranked Crimson Tide into overtime after it had struggled to protect the talented quarterback.

“Throughout all the ups and downs, even that last drive, I have so much faith in my guys,” Young said. "My confidence never wavered.”

At that point it seemed inevitable the Tide would win, facing an Auburn offense with a hobbled backup quarterback in T.J. Finley.

After Alabama scored a TD on its opening possession, the Tigers matched it – and had a chance to win the game with a 2-point conversion.

The Crimson Tide had outgained the Tigers more than 2-to-1 and, despite its issues, was clearly the better team and the team best equipped to keep scoring in overtime.

Still, Auburn coach Bryan Harsin chose to kick the tying extra point, instead of going for two and the win in a spot where Alabama's offense could not respond.

If you're the underdog trying to spring an upset, this is how you do it. The more you play the better your chance of being exposed by the more talented team.

The Tide and Tigers exchanged field goals in OT round two and then went to the 2-point conversion shootout where Alabama won it in the bottom of the fourth.

Harsin's decision was egregious and he, too, earned himself a spot in Iron Bowl lore for all the wrong reasons.

Ohio State's four-year run as Big Ten champion is over.

So is Oklahoma’s six-year streak of Big 12 titles and Clemson’s six-year run atop the Atlantic Coast Conference.

Only Ohio State still has faint playoff hopes and it would take at least a few upsets during championship weekend to revive the Buckeyes.

Instead, Michigan, No. 17 Iowa, Oklahoma State, No. 9 Baylor, No. 20 Pitt and No. 21 Wake Forest will play for conference titles. Only Iowa was ranked in the preseason. The Hawkeyes, after rallying to beat Nebraska on Friday, got the help they needed from Minnesota on Saturday. The Gophers upset No. 18 Wisconsin to win Paul Bunyan’s Axe and hand the Big Ten West to Iowa.

There has never been a team to reach the playoff after being unranked in the AP preseason poll. Michigan and Oklahoma State both have a chance to pull that off.

There has been a persistent rumor about Oklahoma's Lincoln Riley being targeted by LSU to be its next coach. So much so that Riley was asked about it after losing Bedlam. Or at least a reporter tried to ask him about: “Let me stop you right there. I’m not going to be the next coach at LSU. Next question.” ... There will be two unbeaten teams in FBS heading into championship weekend: Georgia and Cincinnati. North Texas ended No. 15 UTSA's perfect season with a 45-23 victory. UTSA will still host the Conference USA title game next week against Western Kentucky. As for North Texas, it finished the season with five straight victories to become bowl eligible and maybe save coach Seth Littrell's job ... Old Dominion, one of two FBS programs to not play at all last season, also ended its season on a five-game winning streak to become bowl eligible under former Penn State assistant Ricky Rahne ... All signs and media reports point to TCU hiring SMU coach Sonny Dykes to replace Gary Patterson. Dykes would be switching sides in a crosstown rivalry and leaving on a down note. SMU lost four of the last five games, including at home to Tulsa on Saturday ... Washington State decided it didn't need to go looking for a new head coach to replace Nick Rolovich. A day after snapping a seven-game Apple Cup losing streak against Washington, Jake Dickert received a five-year contract ... The two biggest questions heading into the next week or so for Florida are: Who's the next coach? Can he keep quarterback Anthony Richardson from transferring? The talented freshman showed flashes all season of being a potential difference-maker and came off the bench to help Florida get bowl eligible by beating Florida State.