Bearcats one win away from making CFP history after downing ECU 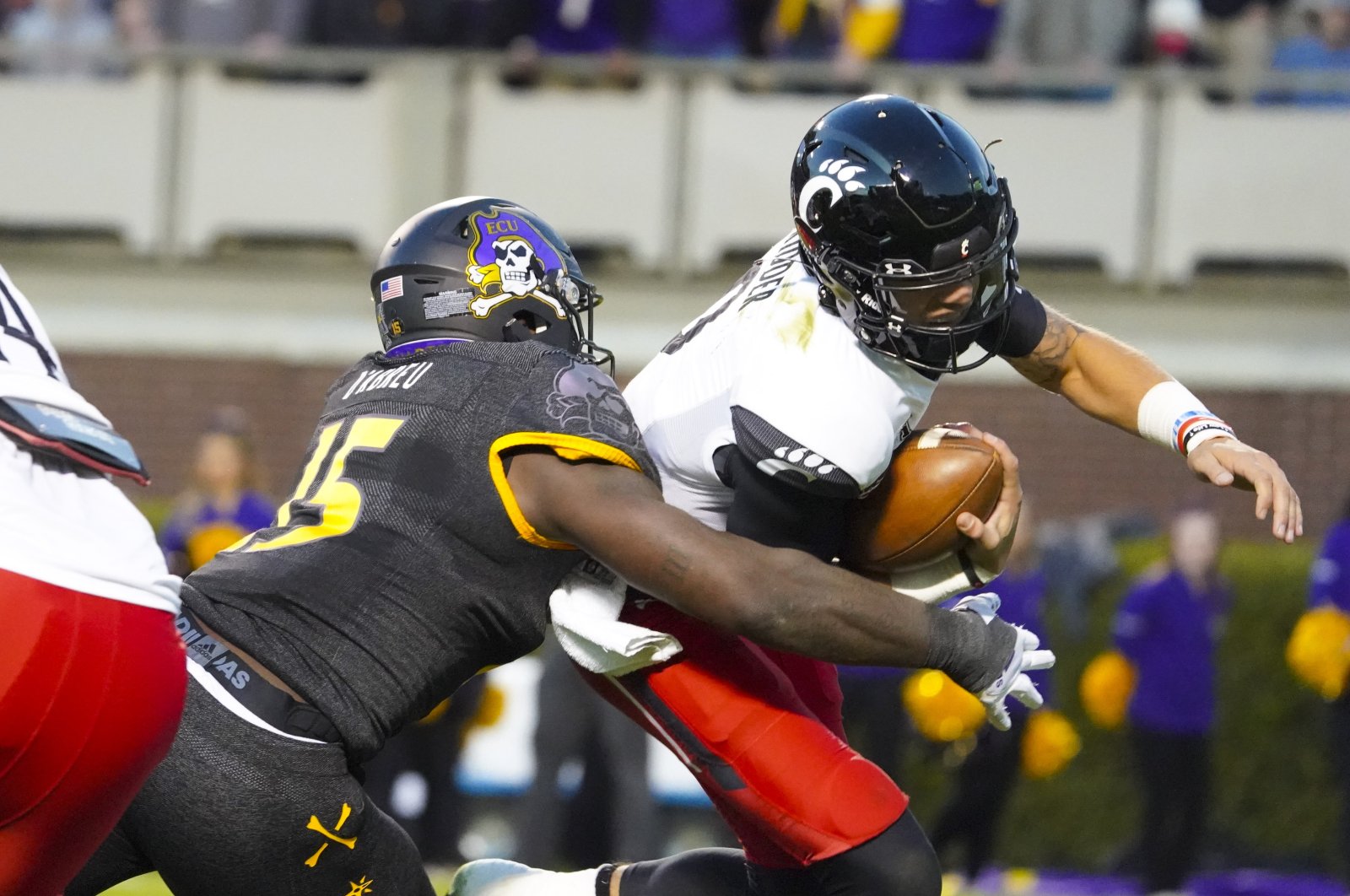 Barring a series of unfortunate events, the No. 4 Cincinnati Bearcats (12-0, 8-0 American Athletic Conference, CFP No. 4) are just a victory against No. 19 Houston away from becoming the first team outside of a Power Five conference to compete in the four-team College Football Playoff.

This outcome was largely achieved because of Cincinnati’s defense. As a bonus, Arquon Bush blocked a field goal and Ahmad Gardner returned the ball 60 yards for a fourth-quarter touchdown to make it 28-6.

Less than four minutes later, Darrian Beavers intercepted a pass at the 7:27 mark, but the ensuing possession resulted in Cincinnati’s second turnover inside the East Carolina 5-yard line.

Ridder finished 17 for 28 for 301 yards with two interceptions. Alec Pierce caught eight passes for 136 yards. Jerome Ford rushed for 85 yards and a touchdown.

With N.C. State down 30-21, Leary found Emeka Emezie on a busted coverage for a 64-yard touchdown strike with 1:33 left. The Wolfpack recovered the onside kick, then Leary threw a 24-yard sideline pass to Emezie with 1:09 remaining.

N.C. State (9-3, 6-2) beat North Carolina (6-6, 3-5) for the first time since 2018 to remain in contention for a trip to the conference championship game. It also officially eliminated six-time reigning league champion Clemson from the Atlantic Division race.

The Wolfpack would reach the title game if No. 21 Wake Forest loses at Boston College on Saturday, creating a three-way tie atop the division that would favor N.C. State by virtue of its division record and head-to-head win over Clemson.

Spencer Petras had a 2-yard touchdown run with 2:58 left to give Iowa its first lead and the Hawkeyes came back from a 15-point deficit in the third quarter to beat Nebraska.

Iowa won the border battle for the seventh straight year, but not before Jermari Harris intercepted Logan Smothers’ pass at the Iowa 2 with 43 seconds to play.

The Hawkeyes (10-2, 7-2) stayed alive in the Big Ten West race and now need Minnesota to beat Wisconsin on Saturday to go to the conference championship game next week in Indianapolis.

The loss was another gut punch to Nebraska (3-9, 1-8) in its worst season since 1957. The Cornhuskers, who won’t go to a bowl for a fifth straight year, finished with losses in six straight games and eight of nine. Their nine losses were by a total of 56 points.

Smothers, making his first start in place of the injured Adrian Martinez, threw for 199 yards and ran 24 times for 64 yards and two touchdowns.

Rising scrambled and found Britain Covey on an improvised forward pitch for a 13-yard touchdown with 6:45 left in the third quarter to cap the scoring.

Thomas proved tough to tackle on any play, but especially when he powered through the first level and into the secondary to extend his school record to 18 rushing touchdowns.

Brookshire passed for 192 yards and a touchdown and rushed for 46 yards and another score. The Aztecs (11-1, 7-1) celebrated at their temporary home in the Los Angeles suburbs after completing their first 11-win regular season in 99 years of football.

The Aztecs, who have never had a 12-win season, will host the Mountain West title game next Saturday, Dec. 4, against Air Force or Utah State.

San Diego State erased an early 13-point deficit with a bounce-back effort from its vaunted defense, which shut out the Broncos (7-5, 5-3) over the final 38 minutes.

KJ Jefferson threw for 262 yards and a touchdown and ran for another 58 yards to help Arkansas beat Missouri.

Jefferson led Arkansas (8-4, 4-4 Southeastern Conference) to scores on four straight drives in the third and fourth quarters to turn a four-point halftime lead to 18 with less than 12 minutes left. Treylon Burks was his biggest help, catching seven passes for 129 yards and a touchdown.

Arkansas hadn’t beaten Missouri since 2015, which was the last time the Razorbacks were eligible for a bowl. The eight wins are Arkansas’ most in the regular season since 2011.

Missouri (6-6, 3-5), which finished the regular season at .500 for the third straight year, managed just 316 yards of total offense, 219 of which came from running back Tyler Badie on the ground. Badie had 41 carries. He passed Devin West for Missouri’s single-season rushing record, finishing with 1,604 yards.