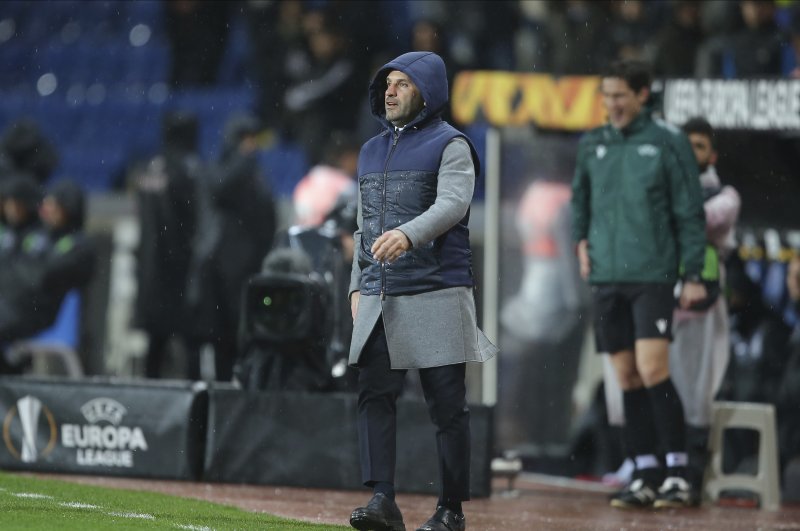 After nearly collapsing in the first 50 minutes of the first leg in Portugal, Başakşehir continued their excellent performance in the final minutes of that game in the second leg and eliminated Sporting Lisbon. Even though the game itself was not a very exciting one, the order of events made it a breathtaking experience for all Başakşehir fans. The Bosnian winger of the Turkish side, Edin Visca, first scored the third goal in the extra-time, which took the game to overtime, and then scored a penalty in the final minutes of overtime and eliminated Sporting. Nevertheless, the real architect of this victory was the manager Okan Buruk, who made the right changes after the first leg and defeated his opponent, which seemed invincible in the first leg.

After the match in Portugal, I wrote that Başakşehir’s 4-2-4 formation was not the right one against Sporting. Even though I do not equate formations with strategies since the latter is a larger concept which involves the former, in this case, Buruk’s decision to keep only two midfielders against a five-men Sporting midfield cost them a lot in the first game. In the second one, however, Buruk changed his mind and put three midfielders and took out one of the strikers, Enzo Crivelli. Added to that, Eljero Elia and Daniel Aleksic, two fast and creative players, were deployed against the slow Sporting defense. This made Başakşehir attacks much more dynamic compared to making lots of crosses to two target-man strikers in the penalty box.

However, Sporting also responded well to this approach in the second half and scored a goal that brought them to the last 16. Since both Aleksic and Elia were positioned on the right wing, the Portuguese side took more precautions on this wing and eventually decreased Başakşehir’s offensive capabilities. At this point Buruk had only two options, he could either order his team to cross the ball to Demba Ba and hope the veteran striker scores one, or take all risks and put even faster and more creative players on the pitch. He opted for the second one as he substituted midfielder İrfan Can Kahveci with winger Fredrik Gulbrandsen, who had to act like a true box-to-box player. The decision paid off as the team scored in extra-time and in the 30-minute overtime.

Since Buruk does not play with this type of strategy, with lots of fast and creative players, in the Turkish Super League, he had no choice but to increase the number of those players on the pitch. Nonetheless, this game should be enough to show that Başakşehir is capable of playing a much more talented game than the one they played with two big strikers. For the time being, they are getting the results they want in Turkey as well, but if the goal of the club is to become champions in the Super League and in the Europa League, they have to work more on the game they played in the second leg.