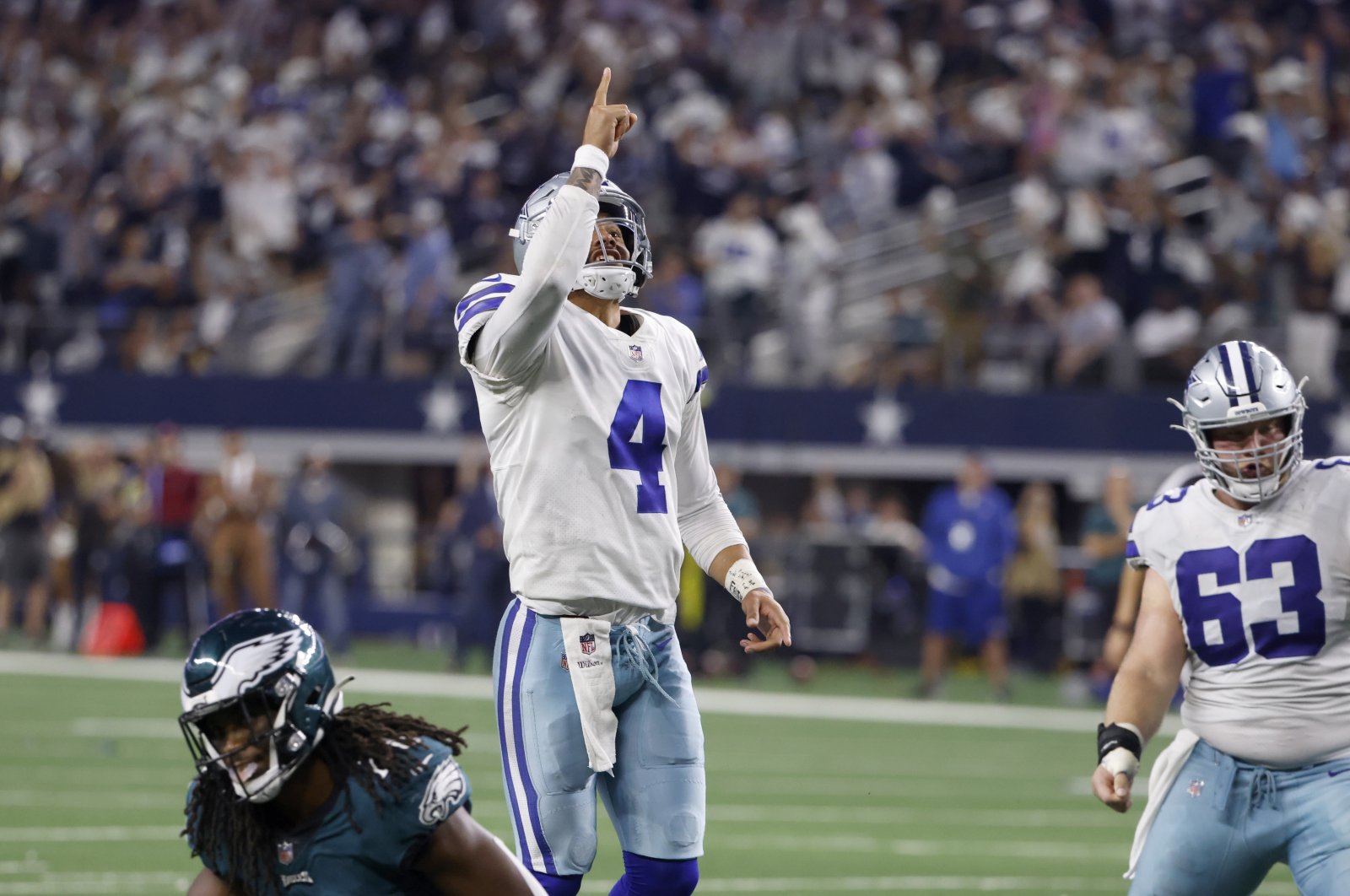 Dallas Cowboys quarterback Dak Prescott (4) and center Tyler Biadasz (63) celebrate a touchdown scored by Dalton Schultz in the second half of an NFL football game against the Philadelphia Eagles in Arlington, Texas, U.S., Monday, Sept. 27, 2021. (AP Photo)
by ASSOCIATED PRESS Sep 28, 2021 7:53 am
RECOMMENDED

After playing their first two games of the season extremely close – a two-point loss to Tom Brady's Tampa Buccaneers to open the NFL season and then a field goal as time expired to beat the Los Angeles Chargers in Week 2 – Dallas finally unleashed their high octane offense and ran out comfortable 41-21 winners over the Philadelphia Eagles on Monday Night Football in Dak Prescott's first home game since his season-ending injury a year ago.

Prescott ran toward the tunnel, raising his arms to the fans and tossing them souvenirs after the Cowboys manhandled the Eagles in prime time.

The scene was a stark contrast to almost a year earlier, when the star quarterback was in tears as he rode on a cart through the same spot after the gruesome ankle injury that ended his season.

Prescott threw for three touchdowns in his first home game since the injury, Trevon Diggs returned an interception 59 yards for a score and the Cowboys beat the Eagles 41-21 on Monday night.

“Just thankful for everything that I’ve been through, all of the hard work that made me account for just to be back out here doing what I love,” Prescott said. “It’s the greatest place to play football.”

Ezekiel Elliott ran for a season-high 95 yards and two touchdowns, and tight end Dalton Schultz had the first two-TD game of his career.

Except for a fumble in the end zone that gave the Eagles (1-2) their first touchdown, Prescott was efficient, going 21 of 26 for 238 yards without an interception in the first NFC East game for both teams.

Prescott's first game at AT&T Stadium since the season-ending compound fracture and dislocation of his right ankle in Week 5 last year against the New York Giants was also the return to full capacity after the pandemic-imposed limits last season. There were 93,267 fans inside with the retractable roof open at the $1.2 billion facility.

“A guy like Dak, he's going to be psyched regardless,” Elliott said. “There's not any extra he can get besides just the competitor he is, the player he is.”

The Cowboys (2-1) had a 19-1 edge in first downs late in the first half, but the Eagles were down just 20-7 at the break. After Javon Hargrave forced Prescott's fumble and caught the ball for the score, the Eagles stuffed the QB on a fourth-down sneak at the other end.

Diggs stepped in front of a pass from Hurts to the sideline on the third play of the second half and ran untouched for his first career TD while becoming the first Dallas player with a pick in each of the first three games since Everson Walls in 1985.

Hurts had completions of 41 yards to Quez Watkins, 38 yards to tight end Dallas Goedert and 27 yards to tight end Zach Ertz while finishing 25 of 39 for 326 yards with two TDs and two interceptions. Plenty of the Texas native's passing yards, and the second TD, came with the game out of reach.

Prescott's 19-yard touchdown pass to Schultz put the Cowboys ahead for good at 14-7 late in the first quarter, and a 2-yarder to Cedrick Wilson on fourth down essentially put the game away at 34-14 early in the fourth.

Any doubt was erased when rookies Micah Parsons and Osa Odighizuwa shared a sack of Hurts on a desperation try on fourth-and-9 midway through the fourth quarter. Odighizuwa had his first career sack in the first half, dropping Hurts for an 11-yard loss.

Schultz, who led Dallas with 80 yards receiving, scored again on a 22-yarder in the fourth quarter.

Tony Pollard added 60 yards rushing on 11 carries as the Cowboys finished with 160 yards on the ground against the NFL's No. 2 run defense.

“They had a good game plan to run the ball, we were second and 4, second and 3,” Eagles defensive tackle Fletcher Cox said. “One thing we’re known for is stopping the run. We couldn’t get off the field.”

Jimmy Johnson, who coached the Cowboys to a pair of Super Bowl titles in the 1990s, made a rare appearance on their home field when he was presented his Pro Football Hall of Fame ring at halftime along with safety Cliff Harris and receiver Drew Pearson. All three were inducted this summer.

Johnson started his speech by thanking owner Jerry Jones and ended it with the famous line he first shouted after an NFC championship game win over San Francisco during the 1992 season: “How 'bout them Cowboys!” Johnson and Jones split acrimoniously after another Super Bowl title to finish the 1993 season. The two hugged before Jones put the ring on Johnson.

Cowboys: Carolina visits Sunday with the Panthers seeking their first 4-0 start since the 2015 season, when they started 14-0 and lost to Denver in the Super Bowl.