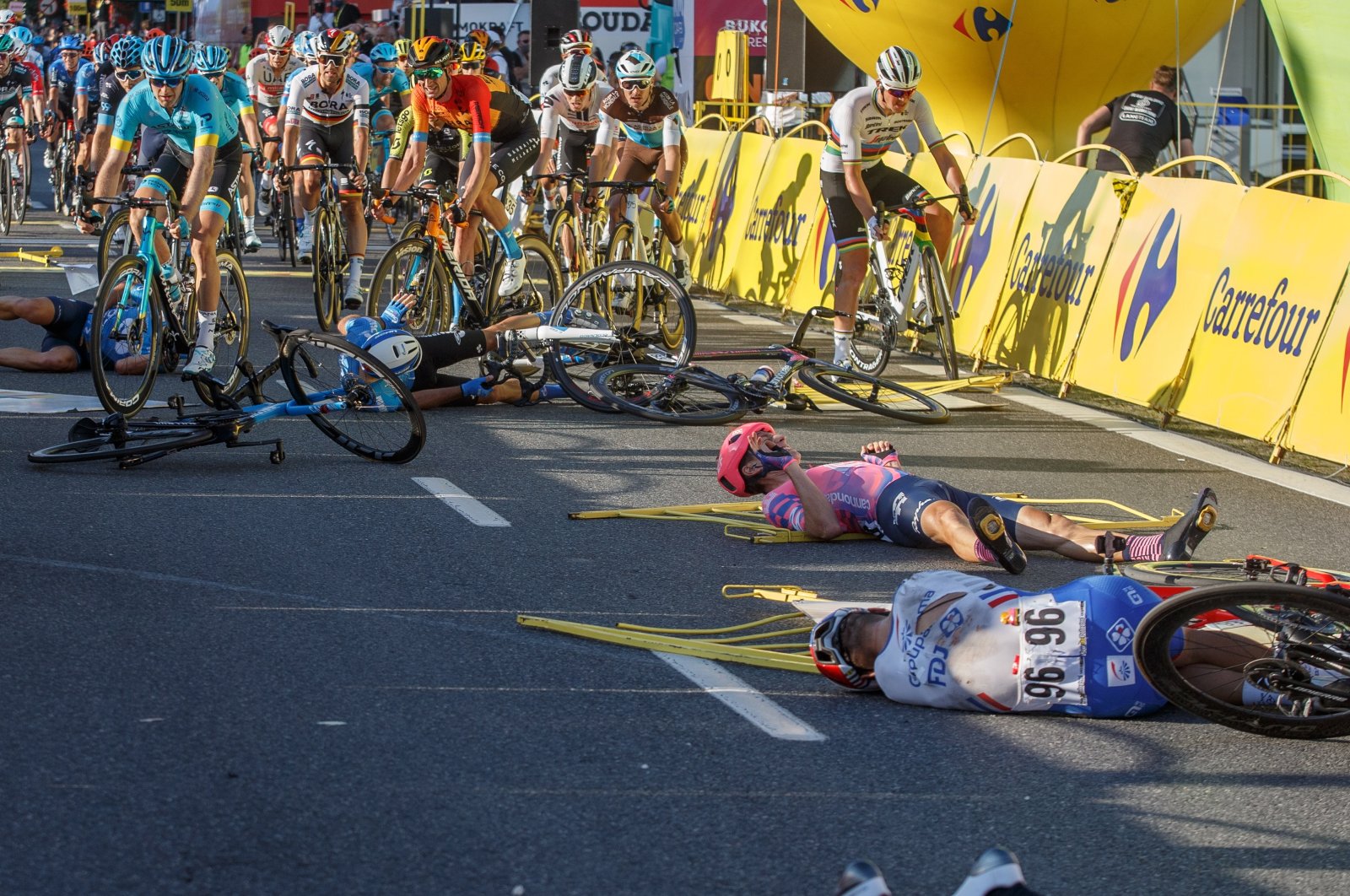 Cyclists lie on the street following a crash in the sprint during the Tour of Poland cycling race, between Chorzow and Katowice, Poland, Aug. 5, 2020. (EPA Photo)
by French Press Agency - AFP Aug 06, 2020 2:46 pm
RECOMMENDED

Dutch cyclist Fabio Jakobsen is in a serious but stable condition, doctors said on Thursday, a day after a horrifying crash in the opening stage of the Tour of Poland.

Jakobsen, of the Deceuninck-Quick Step team, underwent a five-hour operation to the head during the night and is still in a medically-induced coma in intensive care.

"Today we will try and wake him from the coma," Pawel Gruenpeter, deputy head of the Sosnowiec hospital where Jakobsen is being treated, told Polish media.

"A scan has been carried out and the brain does not appear to have been affected... The main injuries are to the face. Fortunately, the eyes have not been affected. The condition is serious but stable," Gruenpeter said.

Jakobsen, 23, was thrown into and over a barrier at a speed of 80 kmh (50 mph) as he raced elbow-to-elbow with fellow Dutchman Dylan Groenewegen of Jumbo-Visma in a tight sprint to the line in Katowice in southern Poland.

Groenewegen veered suddenly to the right, squeezing his rival into the security wall. Jakobsen somersaulted over the barriers before colliding with a race official.

No spectators were present as the race is being held with coronavirus pandemic precautions in place.

Groenewegen went on to win the stage but was later disqualified with Jakobsen declared the winner.

Organizer Czeslaw Lang said in a statement that he was "somewhat relieved" after speaking to doctors.

"After seeing the crash, we feared the worst, but now we know that the situation is serious but stabilized," Lang said.

Lang said that the race official also injured in the accident had "regained consciousness and is now in a stable condition."

The incident came a year to the day after the death of 22-year-old Belgian sprinter Bjorg Lambrecht, who died after falling and hitting a concrete structure on the 2019 Tour of Poland.

Governing body UCI earlier said it "strongly condemns the dangerous behavior of Dylan Groenewegen" and has referred the incident to a disciplinary panel.

Patrick Lefevere, general manager of the Deceuninck-Quick Step team, tweeted: "I am going to court. These kinds of actions must be outside cycling. It is a criminal act, sir."

The drama came at the end of the first stage, raced over 198km from Chorzow to Katowice in southern Poland.

Jakobsen is considered a rising star of the sprint in the peloton who made his name in 2019 with two stage wins on the Vuelta a Espana, one of the sport's three Grand Tours.

In last year's Tour of Poland he was third on the opening stage.

Groenewegen, 27, is a four-time stage winner on the Tour de France, including the final stage in 2017 on the Champs Elysees in Paris.