‘Dash for cash’: US teachers get apology after ice crawl for funds 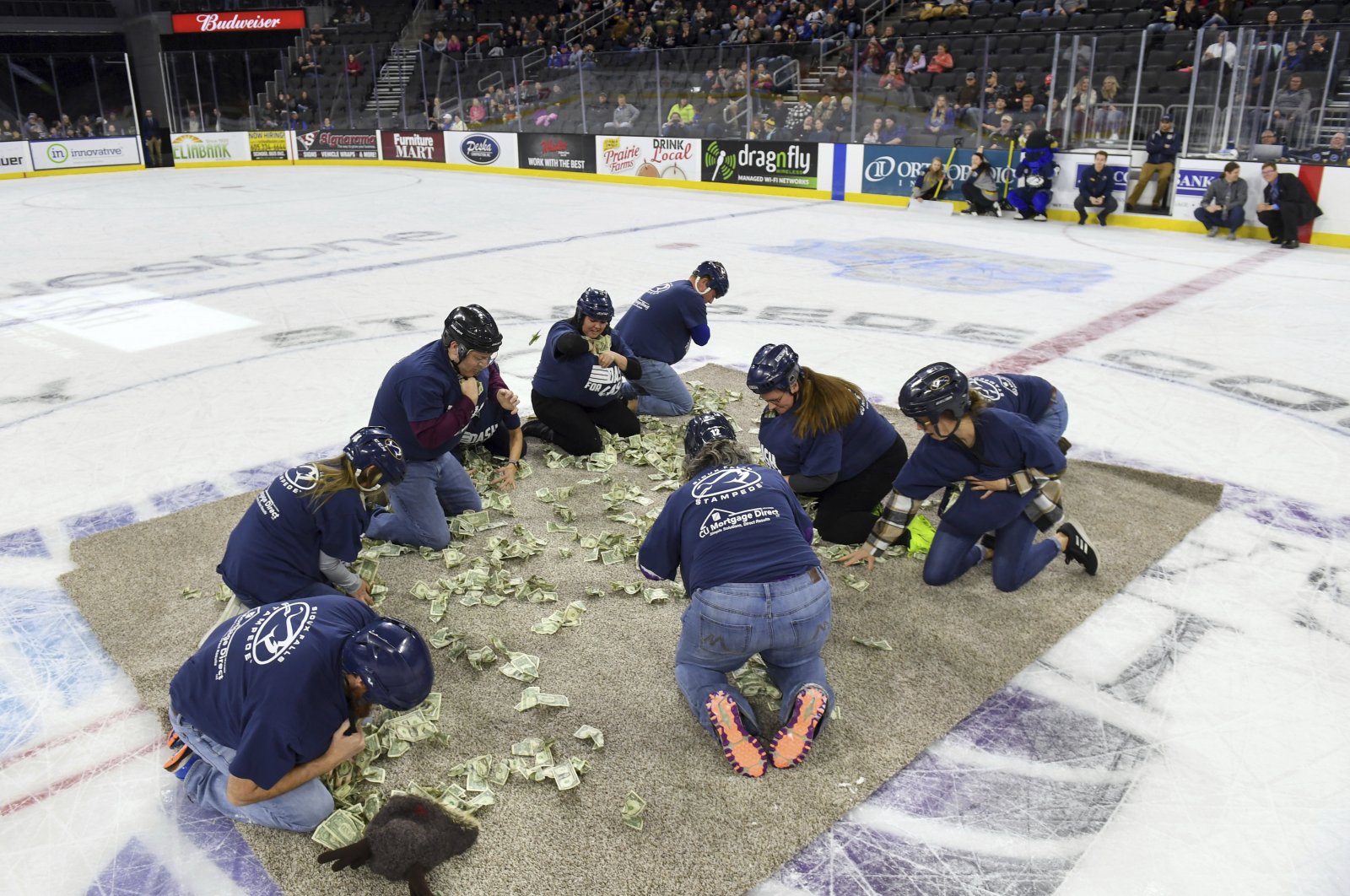 Local teachers scramble for dollar bills to fund projects for their classrooms in the first-ever Dash For Cash between periods at the Sioux Falls Stampede game, South Dakota, U.S., Dec. 11, 2021. (AP Photo)
by Daily Sabah with Agencies Dec 14, 2021 3:09 pm

A United States Hockey League (USHL) team apologized on Monday for a fundraising event that featured teachers crawling on ice to collect dollar bills between periods of the game to help pay for classroom supplies in South Dakota. The event that saw teachers on their hands and knees fetching dollar bills should not have happened, the head of the state's teachers union said Monday.

The Sioux Falls Stampede launched the "Dash for Cash" promotion on Saturday, dropping some $5,000 onto what appeared to be a mat on the center of the ice before 10 teachers frantically scooped up the cash on all fours in front of a live audience.

They had five minutes to collect as many of the 5,000 one-dollar bills that were spread out on carpet at center ice of the home arena for the Sioux Falls Stampede.

"Although our intent was to provide a positive and fun experience for teachers, we can see how it appears to be degrading and insulting towards the participating teachers and the teaching profession as a whole," the team said in a written statement.

"We deeply regret and apologize to all teachers for any embarrassment this may have caused."

The Stampede said the promotion was meant as a charitable gesture to help fund local teachers and classrooms, with the 10 participants in Saturday's affair randomly selected from 31 applications.

South Dakota ranks 50th in the nation for average teacher salary, according to the National Education Association.

The club said the 10 teachers received at least $500 apiece on Saturday, adding it would funnel another $500 to each participant as well as to the remaining applicants who were not part of Saturday's event.

The most money gathered by a teacher was $616, the Sioux Falls Argus Leader reported.

Many critics on social media called the event demeaning. Loren Paul, president of the South Dakota Education Association, said it showed that the state needs to do better for its teachers and students when it comes to funding education.

"While the Dash for the Cash may have been well-intentioned, it only underscores the fact that educators don’t have the resources necessary to meet the needs of their students," Paul said. "As a state, we shouldn’t be forcing teachers to crawl around on an ice rink to get the money they need to fund their classrooms.”

Ryan Knudson, the director of business development and marketing for CU Mortgage Direct, which donated money for the event, and Stampede President Jim Olander did not respond to phone and email messages left Monday by The Associated Press (AP).