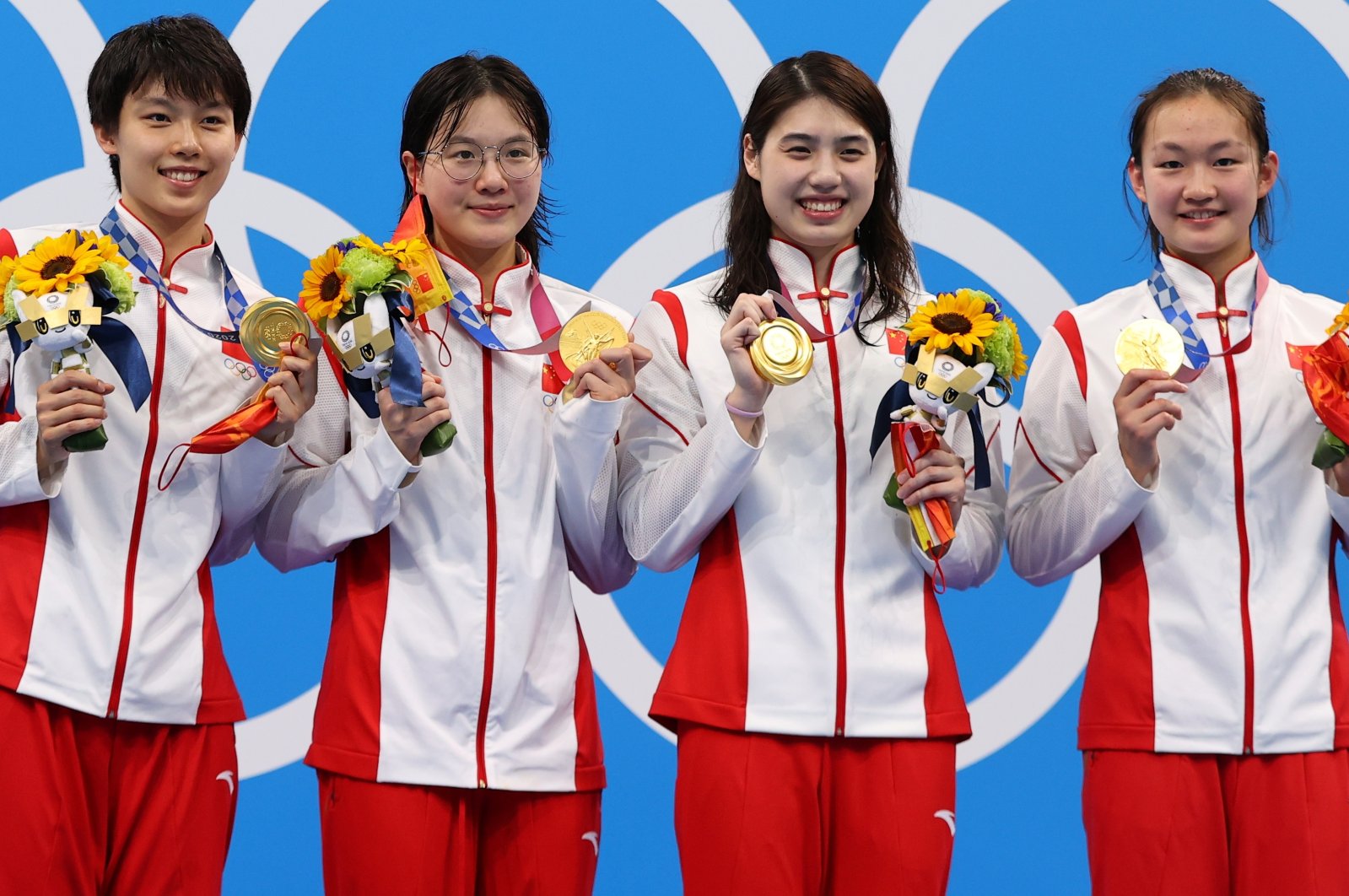 U.S. swimmer Caeleb Dressel won the men's 100-meter freestyle to help his country to two gold medals in Tokyo pools Thursday while China's women responded with two golds, and a world record, of their own.

Alongside Dressel's triumph in the marquee event, fellow American Bobby Finke clinched the 800-meter freestyle with an impressive late surge.

China gained its first gold in the Tokyo pool with Zhang Yufei winning the women's 200-meter butterfly and then she returned to the pool to help her team upset the favored Australians to win the 4x200-meter freestyle relay, setting a world record along the way.

Australia's Zac Stubblety-Cook took gold in the men's 200-meter breaststroke, also thanks to an incredible late surge to the finish.

World champion Dressel powered to victory in an Olympic record 47.02, finishing six-hundredths of a second ahead of Rio winner Kyle Chalmers of Australia, with Russian Kliment Kolesnikov taking bronze.

Dressel went into the race as favorite and led from rising star Kolesnikov at the turn before holding off a strong finish from Chalmers to touch first.

It was Dressel's fourth Olympic gold but his first in an individual event having picked up two relay medals in Rio and the 4x100-meter freestyle relay in Tokyo.

"I wasn’t worried about anything at all ... it means a lot, I knew the weight was on my shoulders," said Dressel.

"It's a really tough year, it's really hard. So, to have the results show up, It really came together, so I'm happy," Dressel said.

In the 800-meter free, Finke pulled off a surprise win ahead of Italian world champion Gregorio Paltrinieri, who led all the way until the 750-meter turn when German Florian Wellbrock moved in front for the last length.

But Finke then made his late move and powered home in a time of 7:41.87. Wellbrock faded but Paltrinieri did not, the Italian, who had been a doubt for the Games due to illness, touching 0.24 seconds behind Finke to take the silver.

Finke said he had to push hard when he saw Paltrinieri was clawing his way back towards the finish.

"I noticed when I was about 10 meters out that he was catching a little ground and that was all the motivation I needed," said the American.

Paltrinieri was the clear favorite last year before suffering with "mono," or mononucleosis, and its tiring effects.

China's biggest gold medal hope Zhang delivered in style – taking control from the outset as she set an Olympic record of 2:03.86 to improve on her silver from the 100-meter butterfly.

Americans Regan Smith and Hali Flickinger took silver and bronze to win the country's first medals in the women's event since Sydney in 2000.

Zhang was soon back in the water as part of the 4x200-meter team, which left the Americans and highly-rated Australians trailing in their wake in a race that saw all three medal winners swim under the world record time.

Australia had been the fastest qualifiers, and with double Tokyo gold medal winner, Ariarne Titmus in their ranks were the heavy favorites to follow up on their 4x100-meter gold.

Zhang kept China in front on the penultimate leg before handing over to Li Bingjie, who did well to hold off six-times gold medallist Katie Ledecky in the final meters as the United States had to settle for silver.

While China celebrated, Australia was left to rue their decision to leave out teenager Mollie O’Callaghan, who was their second-fastest swimmer behind Titmus in the heats.

There was also criticism from some pundits of their rotation policy of fielding different teams in the heats and the final.

In the men's 200-meter breaststroke, Arno Kamminga of the Netherlands led at the 150m turn and was inside world record time as he fought with Finland's Matti Mattsson.

Stubbletly-Cook was third on the last turn, 1.2 seconds adrift of the lead, but then delivered an astonishing final lap to secure the country's fifth gold medal in the pool so far and the first for their men.

Kamminga was second, adding to his silver in the 100-meter breaststroke, with Mattsson taking bronze.

The gold was the first in men's breaststroke for Australia since Ian O'Brien in Tokyo in 1964, also in the 200 meter.