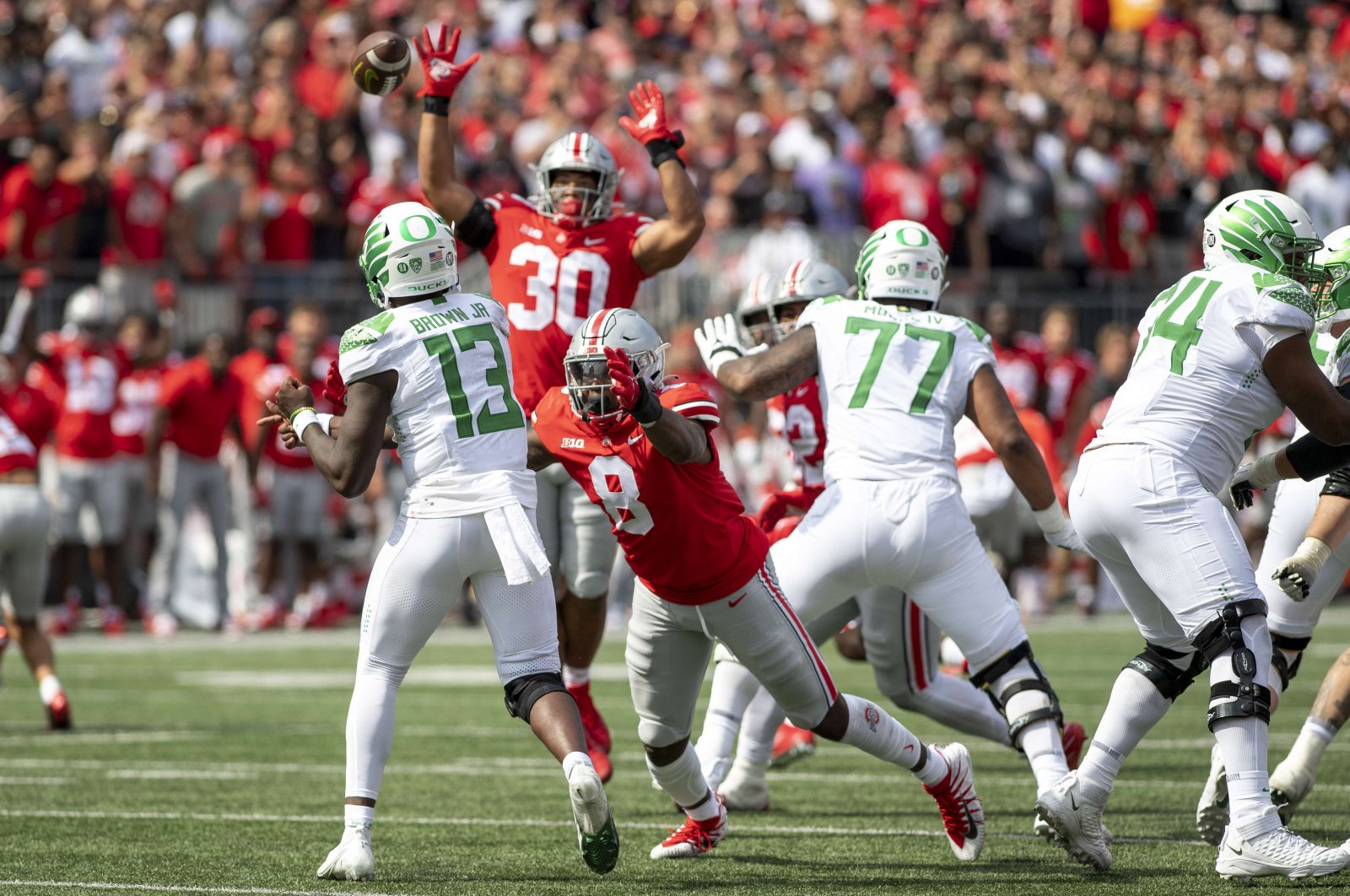 It is a rare feat to make it through a college football regular season undefeated, and while Ohio State was able to accomplish this in the previous two before ultimately capping each season with a bowl loss, the wheels came off on Saturday as the Oregon Ducks stunned the Buckeyes 35-28 in front of a crowd of 100,000 in Columbus.

Verdell, who has struggled with injuries the past two seasons, made it happen. He ran for 161 yards and scored three touchdowns as shorthanded No. 12 Oregon stunned No. 3 Ohio State 35-28 on Saturday.

“We saw the Minnesota running back was having a good game, and we wanted to do the same thing,” the 5-foot-8, 211-pound Verdell said.

The Buckeyes’ last loss in the regular season came at Purdue in October 2018 under Urban Meyer.

Ohio State (1-1, 1-0 Big Ten) never led the game it was favored to win by 14 1/2 points despite gaudy numbers from freshman quarterback C.J. Stroud. Its front seven struggled to contain Verdell, control the edge and get after Brown in front.

“They quickly adapted and just played with grit and toughness, knowing this was going to be a slugfest,” Oregon coach Mario Cristobal said.

“It's hard to express in words the magnitude of coming out here down a couple of guys due to injury, and just playing really, really gutsy football, executing at a high level,” Cristobal said. “A tremendous job of preparation and turning it into a reality by our players and coaching staff.”

The Buckeyes had a chance to tie it late after pulling within a touchdown with 7:55 to go. But when they got the ball again, Stroud took his first sack of the day and then was intercepted by Verone McKinley III on a desperation sideline pass on third-and-18 at the Oregon 35 with 2:50 left as a crowd of more than 100,000 sat stunned.

Stroud, trying to show he is a worthy heir to Justin Fields, likely will be fine. It's the Ohio State defense that needs work.

Twice in the first half Verdell scurried around the left end – one of them was a pitch pass on fourth-and-1 – and went untouched into the end zone from 14 yards out. Travis Dye exploited the left side again, running from 5 yards out to give the Ducks a 28-14 third-quarter lead.

Three plays into the second half, Verdell blasted through the middle untouched and outran defensive backs for a 77-yard score. He went left again for a 7-yard gain and a first down in the fourth quarter, one play before Brown connected with Moliki Matavao for a 14-yard touchdown to give the Ducks a 35-21 lead with 12:46 left.

Oregon: The Ducks were better than they showed in their opener when they struggled with Fresno State. Brown made smart decisions; Verdell, who was plagued by injuries the last two seasons, had a stellar day; and the O-line controlled the line of scrimmage.

Ohio State: Stroud is adept at finding his star receivers and making throws, but he is still getting comfortable with decision-making. He could be the next offensive star for the Buckeyes in a long line. But the defense needs improvement, especially linebackers. This loss is squarely on their shoulders.

“You ask yourself, is it personnel, is it scheme or is it coaching?" Day wondered. He said coaches would watch the tape and get to work on the problems.

Ohio State likely will take a considerable tumble in the next polls, while the Ducks move into the top 10.