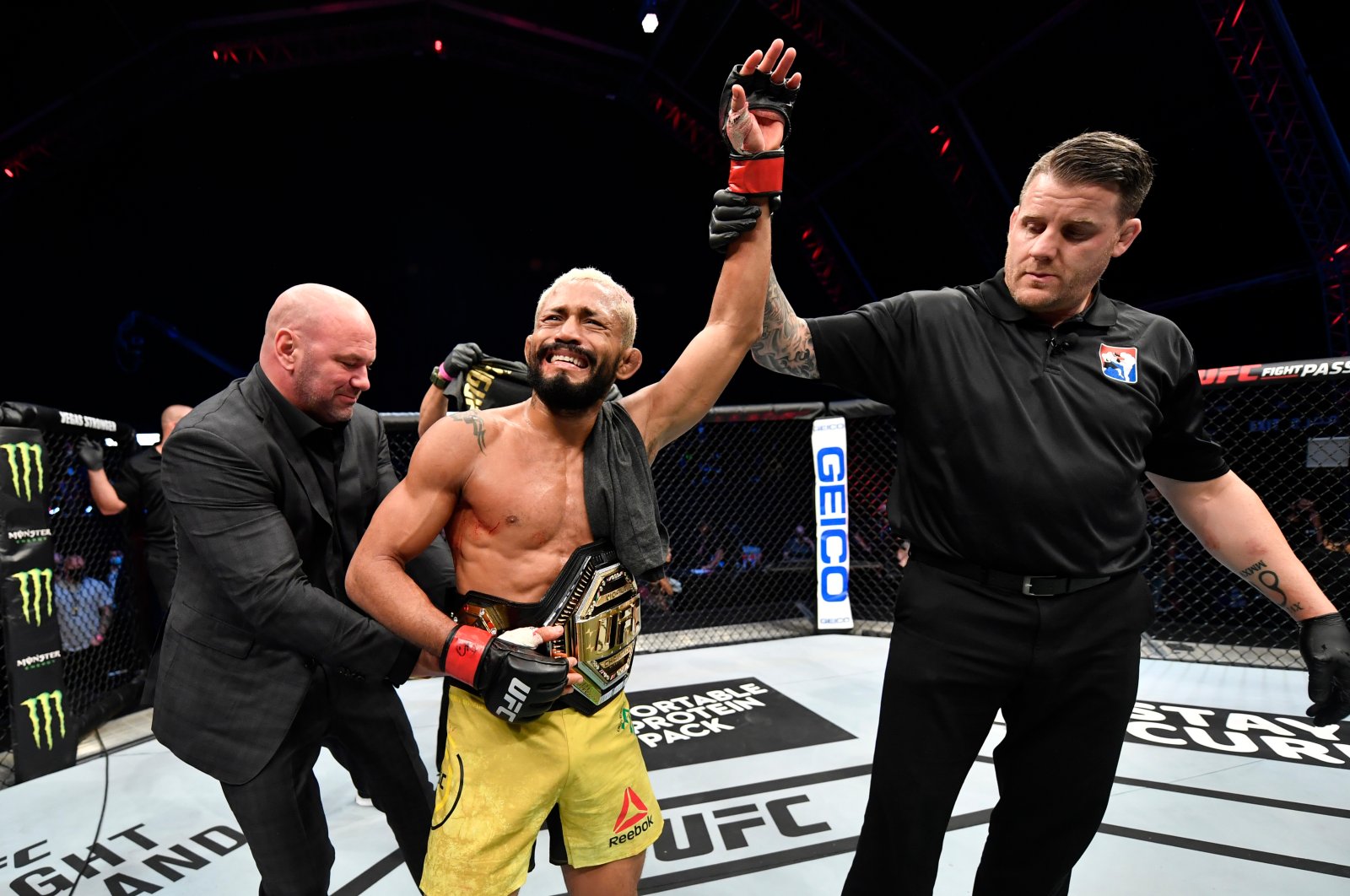 Deiveson Figueiredo won the vacant UFC flyweight championship Sunday, finishing a dominant performance against Joseph Benavidez with a rear naked choke with 12 seconds left in the first round.

Jack Hermansson also stunned Kelvin Gastelum with a first-round submission by heel hook in the penultimate bout of the third UFC show in eight days from Fight Island, the UFC's base of operations on Yas Island in Abu Dhabi.

Figueiredo (19-1) became just the third 125-pound champion in UFC history by thoroughly dominating his second victory in five months over Benavidez. The Brazilian veteran knocked down Benavidez three times with punches and barely missed on several choke attempts before finally landing a choke that appeared to render Benavidez unconscious.

"I knew that my time was going to come, and this is my time,” Figueiredo said through a translator. "I'm going to continue to defend this belt, and I’m going to be an active champion.”

Benavidez (28-7) dropped to a heartbreaking 0-4 in UFC title fights with the first submission defeat of his 14-year pro career.

The main event was a rematch of the flyweights' meeting on Feb. 29 for the same belt vacated by Henry Cejudo's retirement. Figueiredo missed weight for that fight in Norfolk, Virginia, making him ineligible to claim the title when he stopped Benavidez in the second round with a spectacular one-punch knockdown.

Figueiredo, the first non-American UFC flyweight champ, joins Demetrious Johnson and Cejudo as the only UFC fighters ever to hold the 125-pound title. Johnson beat Benavidez in that inaugural title bout in 2012, and Mighty Mouse reigned for nearly six years before Cejudo dethroned him in 2018.

The 32-year-old Figueiredo is 8-1 since joining the UFC in 2017. He had previous fought only in Brazil.

"I wanted to come here and take this belt home to my city, my state,” said Figueiredo, who grew up near the mouth of the Amazon River. "I'm so proud to get this belt. I said I was going to take it, and here I am.”

Benavidez is one of the top lighter-weight fighters of his generation – but just like longtime friend Urijah Faber, he has repeatedly fallen just short of a UFC title. Benavidez has lost twice to Johnson and twice to Figueiredo, but has lost only one other fight in the past decade.

Hermansson (21-5), a Swede who trains in Norway, rebounded impressively from a knockout loss last September with his fifth win in six bouts overall since 2017.

After a solid opening exchange with Gastelum, the former middleweight title contender, Hermansson alertly grabbed Gastelum's leg out of a ground exchange and violently twisted it to force Gastelum to tap.

"We knew he wanted to engage in the grappling, but then he’s in my game,” Hermansson said. "You’re in my world when we get down there.”

Afterward, Hermansson called out the winner of former middleweight champ Robert Whittaker's showdown with Darren Till next weekend in Abu Dhabi.

Gastelum (15-6) took his third consecutive loss and just the second stoppage defeat of his pro career.

Veteran lightweight Joseph Duffy announced his retirement on Instagram shortly after he took his third consecutive loss with a first-round guillotine choke from Joel Álvarez.

Duffy famously beat Conor McGregor with a 38-second submission in November 2010 while both Irishmen were rising prospects. McGregor won his next 15 fights over the ensuing five years on his way to becoming the biggest star in combat sports.

After next weekend's show highlighted by Whittaker and Till, the UFC will return to Las Vegas for at least four shows at the Apex gym on its corporate campus. The promotion is likely to return to Abu Dhabi in the upcoming months, particularly if the coronavirus pandemic worsens in Nevada.